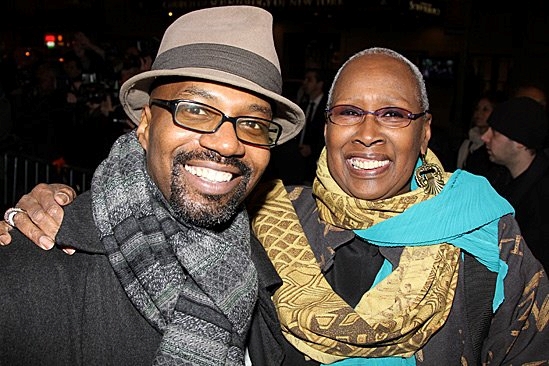 For a limited weekend engagement, September 22 – 24, 2017, these three occurrences converge five decades later, as the cultural centerpiece of Bedford Stuyvesant Restoration Corporation, RestorationART presents Ronald K. Brown/Evidence, A Dance Company in a full-length concert for the first time at The Billie Holiday Theatre, launched with a conversation between Brown and dance legend and mentor to Brown, Judith Jamison.

“Brown and Jamison – from two different generations – embody the essence of ‘blood memory,’ as renowned choreographer Alvin Ailey called it; a remembering, a re-conjuring of a past that one may not remember cognitively, but may viscerally recall,” stated Dr. Indira Etwaroo, Executive Director, RestorationART.

“Evidence at The Billie Holiday Theatre and a conversation with Judith Jamison who passed Ronald the torch of dancing both spirit and revolution are historic cultural moments. The sounds, the rhythms, the rich cultural history of this community…Ronald K. Brown will bring our lives, our stories home to us.”

Opening Night Concert and Conversation, followed by a post-concert reception

This historic conversation between two dance greats – Ronald K. Brown and Judith Jamison – explores the legacy of choreographic works shaped by the Civil Rights Movement to works being created now in the era of Black Lives Matter. This conversation is followed by an evening-length dance concert by Ronald K. Brown/Evidence, A Dance Company. Evidence will present excerpts from High Life, inspired by the work of Jacob Lawrence’s The Great Migration, as well as Jesse B. Semple. The score for the work includes Bid Em In by Oscar Brown Jr, as well as music by the JB’s, Nikki Giovanni, Fela Anikalapo Kuit and Wunmi. The program will also include two solos with music by Donny Hathaway and the Lalah Hathaway.

Tickets are available at RestorationART.org.

Founded by Ronald K. Brown in 1985 and based at RestorationART in Bedford Stuyvesant, Brooklyn, Evidence, A Dance Company focuses on the seamless integration of traditional African dance with Â contemporary choreography and spoken word. Through work, Evidence provides a unique view of human struggles, tragedies, and triumphs. Brown uses movement as a way to reinforce the importance of community in African American culture and to acquaint audiences with the beauty of traditional African forms and rhythms. He is an advocate for the growth of the African American dance community and is instrumental in encouraging young dancers to choreograph and to develop careers in dance. Evidence brings arts education and cultural connections to local communities that have historically lacked these experiences.

Ronald K. Brown/Evidence, A Dance Company is a proud partner in RestorationART’s artistic coalition of leading producing residents working together to ensure the sustainability of arts institutions devoted to the stories of people of African descent. In addition to Ronald K. Brown/Evidence, A Dance Company, the producing residents include The Billie Holiday Theatre, Frank Silvera Writers’ Workshop and ChoreoQuest.

Ronald K. Brown, considered one of the great choreographers of our time, shares with Our Time Press next week the range of influences in his life, including mentors, locations and experiences, that has informed his spirituality, his creativity and his ethic. The Los Angeles Times, in 2016, said “when atrocities in the name of religion dominate world news, choreographer Ronald K. Brown reminds audiences how faith can unite us, heal us and help us get through the worst that life and human nature can inflict. For more than 30 years his New York-based Evidence company has used a sophisticated amalgam of Afrocentric movement and modern dance to make spirituality not merely a passive state but something vibrant and transformative.” Evidence of those words comes alive on stage at The Billie, the weekend of September 22-24. Visit www.RestorationART.org.