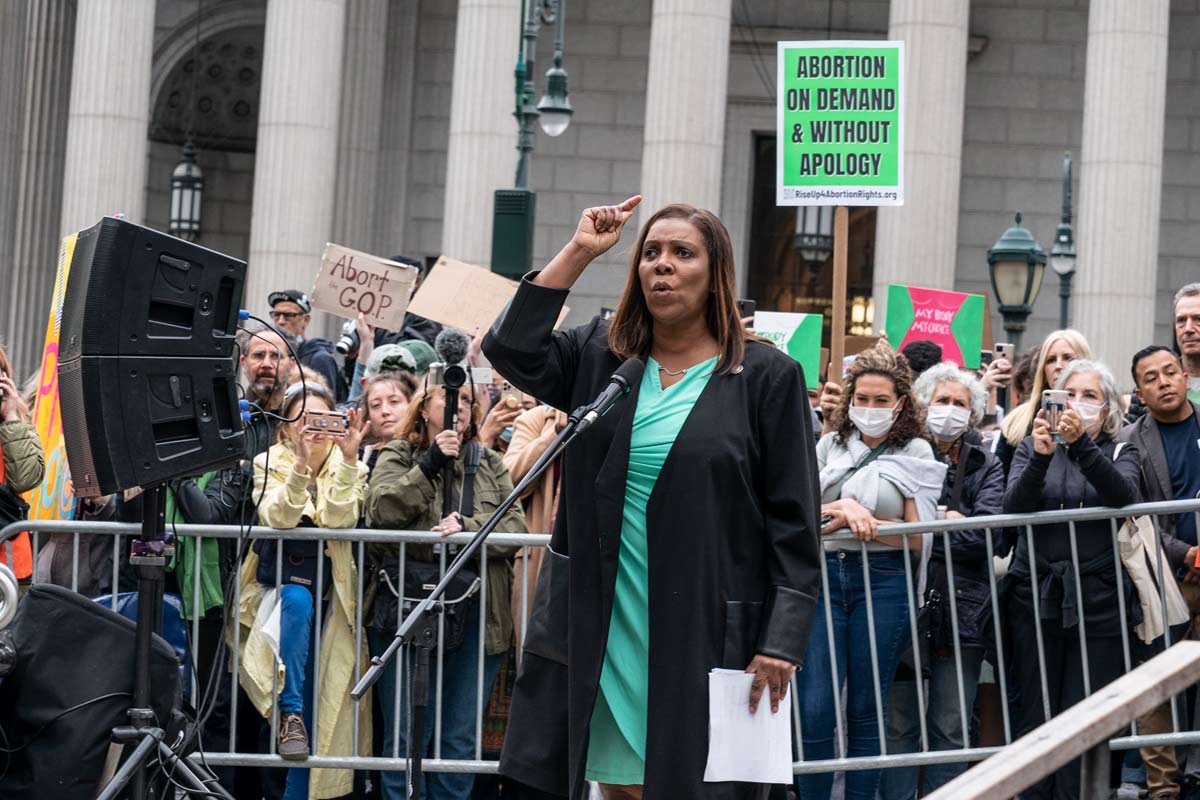 May3, 2022: Last Monday, New York Attorney General Letitia James spoke at a rally in Foley Square attended by thousands on behalf of women’s rights to control their bodies in light of SCOTUS leaked plans to overthrow the 1973 Roe v. Wade ruling effectively banning abortions in the country. The rally was one of many protests across the nation. (Credit Image: © Lev Radin/Pacific Press via ZUMA Press Wire)

Our Time Press reached out to Lurie Daniel Favors, Executive Director at the Center for Law and Social Justice (CLSJ) at Medgar Evers College, for her insights into the ramifications of the U.S. Supreme Court overturning Roe vs. Wade.

Daniel Favors, the former general counsel at CLSJ, is an activist and attorney with a long-standing commitment to racial and social justice. At CLSJ, she leads the 36-year-old foundation’s mission to address racial justice issues by providing quality legal advocacy, conducting community education campaigns, facilitating research and building organizing capacity on behalf of New Yorkers of African descent and the disenfranchised.
Daniel Favors shared her opinion with OTP on the impact of the anti-abortion ruling on Black, Brown, and disenfranchised women.

OTP: What was your initial reaction when learning of Supreme Court’s decision to overturn Roe vs. Wade?
FAVORS: My initial reaction was one of anger but not surprise. We have seen throughout previous court hearings and oral arguments that this current Supreme court, which has a six to three conservative majority, has been intentional about using its power to dismantle access to a panoply of rights, everything from voting rights to protection from police brutality, to reproductive rights, all of these, and so many more, including our rights as, uh, to support members of the LGBTQ community, the rights to engage in interracial marriage. All of these rights have been established as a result of hard-fought civil rights battles. And from the time these rights were initially won and secured people like the radical justices on the Supreme court have been hell-bent on destroying our access to those rights.

OTP: How does the Supreme Court decision to overturn Roe vs. Wade affect Black and Brown women?
FAVORS: Black and brown women will be utterly devastated and unable to combat all of the contributing factors that lead to the current gross disparities in Black maternal health. Black women tend to live in communities where hospitals are closing more rapidly, where access to OB-GYNs is decimated by the sparse placement of these doctors in communities that service folks like us. This limited access increases wait times between maternal appointments. It limits our access to knowledge about treatments and care that can help ameliorate factors that contribute to the disparities in the maternal health rate. This will be the reality almost overnight for women of color in over 23 states in this nation, once this opinion becomes official.

OTP: How will the conservative majority on the Supreme Court impact future rulings dealing with Black and Brown people?
FAVORS: The court is signaling with this opinion, and with those that preceded, that every single civil right that we have ever come to rely on as a part of the integration framework is now up for grabs. We have already seen efforts to roll back the reach of Brown versus Board of Education. We’re witnessing efforts to roll back voting rights all across the country.
It’s important to note that New York State and the city of New York and Brooklyn Queens, and the Bronx also had districts here that were protected by the Voting Rights Act because voter suppression also happened north of the Mason Dixon line. This is signaling that until there is balance restored to the court, or until the court is expanded that every single pillar of integration meaning the civil rights act of 1964, the voting rights act of 1965, the fair housing act of 1968, each of which banned racism in public accommodations and public spaces, banned racism at the voting booth, and banned racism in housing, each of those laws is now at risk. The Supreme Court is using its power to implement rules that the majority of Americans disagree with and the justices don’t care, which is a definite signal that we are headed for trouble.
We’re not going to be able to even expand the rights that we currently have, which frankly are a shell of what they should be. We’re going to be fighting the retrenchment of those rights and conditions could quickly worsen.

A graduate of New York University Law School, Daniel Favors started her legal career as an attorney in the New York offices of Proskauer Rose LLP and Manatt Phelps and Phillips, LLP. She also served as a federal court law clerk in the chambers of the Honorable Sterling Johnson. Before completing law school, Daniel Favors co-founded Sankofa Community Empowerment and Breaking the Cycle Consulting Services, which both focused on educating and empowering communities of African descent. She is a contributing author to The Birth of a Nation: Nat Turner and the Making of a Movement and also penned Afro State of Mind: Memories of a Nappy Headed Black Girl. Currently, Daniel Favors hosts the Lurie Daniel Favors Show on Sirius XM’s Urban View Network.