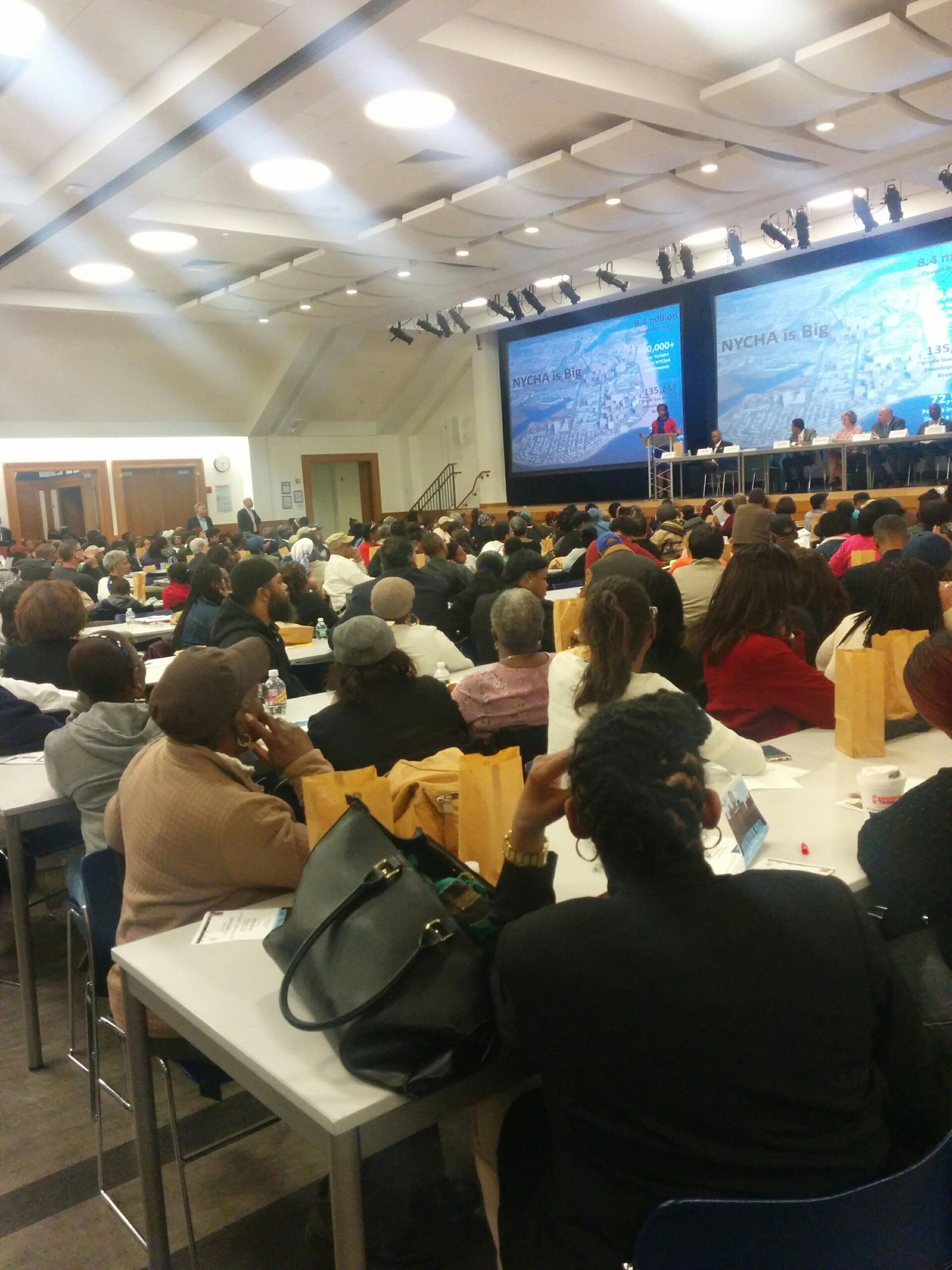 The lobby area in front of UnCommon High School’s auditorium buzzed from arriving New York City Housing Authority (NYCHA) tenants, the press, community activists, public officials and community service representatives striving to promote themselves to the public on November 3, 2016. There were three sign-in tables each manned by three workers to ensure all attendees wrote their contact information on the sheets and to bring attention to the 4”-x-6” blank index card inside the NYCHA Town Hall program. The workers consistently encouraged people to fill the index card with their questions or comments about NYCHA projects and residential units.

The first half-hour of the town hall was designated for filling the cards with one’s thoughts. Given the event’s time slot was 6:30 PM to 8:30 PM, Brooklyn Borough President (BP) Eric Adams and NYCHA Chief Executive Officer (CEO) Shola Olatoye may have agreed the completed cards ensured those who wanted to give “their five cents” would be collected and as many as time permitted to be read aloud and responded to by Ms. Olatoye.

Office of the Special Counsel/Outreach’s Kathleen Daniel successively jogged through the room to collect the completed cards and then delivered them to BP Adams who stood on the stairs to the stage. He, in turn, handed the cards to Ms. Olatoye.

During this period, this reporter interviewed Serena Sears, a resident of Albany Houses. Ms. Sears’ reason for attending this event is that she “missed the emergency tenant association meeting last Thursday about NYCHA buildings being sold. They sold Weeksville and moving some people [to other locations]”. Ms. Sears had heard “studio apartments would go for $1,300 and two-bedroom apartments for $1,700; and there’s a source offering to give $5,000 to assist households to move”. When asked the name of the source, Ms. Sears did not know the name. Not knowing and wanting clarity were the things that motivated her to come with her young son to the NYCHA Town Hall.

Another woman was approached to get her comments. She asked that she be unnamed. She lived in Albany Houses, too. This unnamed woman said, “The tenant association leaders could make life difficult for her, though she believed the leader discussed unrelated matters. What propelled her to attend the town hall was that Albany Houses was being referred to as ‘Albany Shelter’”. She pointed to “a lot of young people had moved from a nearby shelter to here”. When asked about the conditions of the building, she described “dog mess and human feces in the stairwell. Many crackheads were around due [the building] to not being supervised the way it used to be. Further, she complained of “being charged for water, though she doesn’t have a washing machine or air conditioning”. “When you complain to the rent office, you’re directed to call 311” was her last statement.

The Borough President made welcoming remarks around 7:00 PM, introducing those on the dais to the attendees. CEO Olatoye attended with Sideya Sherman, Exec. V.P. for Community Engagement and Partnership; Gerald Nelson, V.P. of Safety and Security; Luis Ponce, Sr., V.P. for Resident Outreach; and Deborah Goddard, Exec. V.P. of Capital Projects in tow. Though silent throughout the town hall, these four NYCHA executives were the people every person concerned about the state of NYCHA property would need to contact.

BP Adams expressed his concern over the facts and rumors swirling around Brooklyn’s NYCHA holdings. Adams praised Ms. Daniels for “knocking on 27,000 doors” and transitioned to the conditions existing on NYCHA properties. Adams said, “NYCHA was not only to serve the brick and mortar needs but also people…You deserve to be in an environment that is healthy. Where the elevators work, the walls are clean and no rodents are running around”. Adams made a link between food and mental issues.

He closed by pledging to work to make substantive changes and reminded the attendees of service to Brooklyn as a Police Captain, State Senator and now as Brooklyn Borough President. Once Deputy Borough President Diana Reyna came to the dais, BP Adams introduced and then left the auditorium.

City Council member (CM) Richie Torres from the Bronx, chair of the Public Housing Committee, followed behind Adams. CM Torres stated that he grew up in NYCHA property. He estimated “$100 million was needed to repair roofs because the root cause of mold in apartments was the condition of the roofs”.

CM Torres was followed by the NYCHA CEO Ms. Olatoye presenting a PowerPoint talk that covered 40 years of federal and state government disinvestment, a major capital improvement plan and a fundraising strategy to cover rehabilitation costs.

Olatoye said, “The overall goal was to preserve public housing in New York City. We have to go back to basics [by focusing on] being the landlord and we need adequate funding to do it. For example, Albany Houses needs brick work and roof replacement”. She proposed “cutting some expenses of senior-level management and using three million square feet of nonresidential space to generate revenue”. Olatoye pointed to “40,000 square feet in Manhattan that would be converted to a public library” as an example of revenue generation. Another revenue-generating strategy was to build market-rate housing near subsidized housing. This section of the town hall would have been more effective if the NYCHA CEO chose fewer objectives and strategies to discuss (this article does not cover all the objectives). One attendee remarked that the slides moved too quickly.

The event’s last hour was designated for reading and responding to the audience’s statements on the index cards. This time, moderated by DBP Reyna, was marked by shouting and interruptions from the audience. The interruptions came primarily from women seated in the front and one woman in the back. Their preference was to call out their questions. Given the event was fashioned to read the cards, there was not a microphone set on the auditorium floor. Ms. Olatoye shared her microphone with the audience. The audience asked whether Weeksville Gardens and Albany Houses had been sold. Olatoye said, “They were still managed by NYCHA. Albany Houses, nor any other sites, are being sold”. When the group rebuffed her statement Olatoye said, “Whoever is telling you, that is wrong. I am the person that would sign off on property sales and I haven’t done so”.

Other questions from the floor included: “Why must my overtime pay be calculated in my annual income. I don’t always get overtime and why do we get rent increases even though we don’t have increases in our income?” DBP Reyna managed to read two to three questions from cards but, in the main, those determined to get their voices heard were addressed by Ms. Olatoye.

Dr. Lenora Fulani, whose press people distributed a notice about NYCHA property up for sale, shared her observations during a telephone conversation on November 4, 2016. “I thought the meeting was great in that when people are stepping on your rights, it is your right to stand up and say no.” The tenants taking control of the meeting [by asking from the floor] is what I think was a good consequence. The attendees were saying, ‘We want a conversation with you and not listen to the responses to the questions you select to answer”.

It is unfortunate the unnamed female resident of Albany Houses maintained her anonymity. When queried about the “calling out” from the front center table, she first looked keenly at the table and stated, “I recognize some of the women over there. They are Albany Houses Tenant Association leaders. This happens at our meetings”.