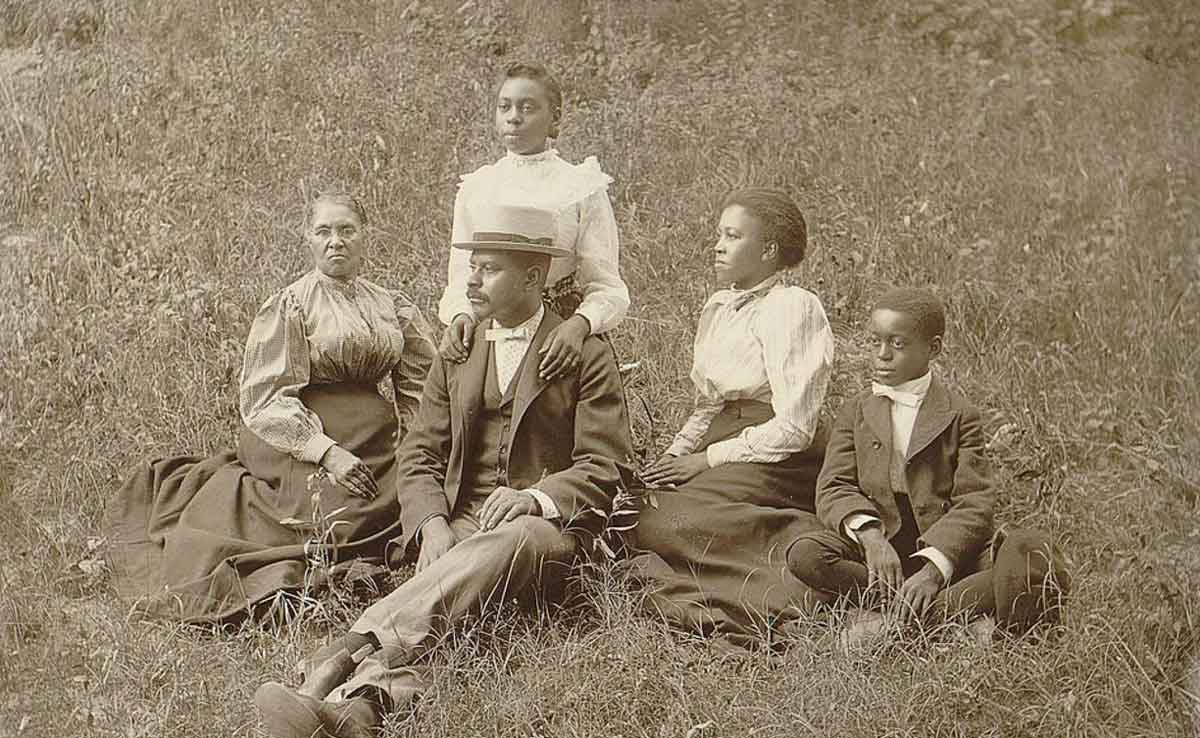 Claretta Bellamy
Provided by NBC News
Throughout slavery, Black family units were in constant danger of disruption, and those in bondage had no control over the structure of their families, let alone their lives.
But the Reconstruction era, which followed the Civil War and the end of enslavement, was a pivotal turning point in history for African Americans and their families.

In the latest episode of the MSNBC podcast “Into America,” journalist Trymaine Lee visits the National Museum of African American History and Culture in Washington, D.C., to get an exclusive look at the exhibition “Make Good the Promises: Reconstruction and Its Legacies.” During the interview, he speaks with Spencer Crew, the curator of the exhibit and the emeritus director of the museum, to help tell the story of Reconstruction through the Black perspective.
During Reconstruction, from 1865 to 1877, 4 million previously enslaved Black people worked to establish themselves in their new independence.

Three new constitutional amendments, Crew said, “changed the nature of citizenship in this country.” The end of slavery also gave the opportunity for African Americans to reconnect with family members displaced over generations. Families would travel to nearby plantations and farms, while also placing advertisements in newspapers in hopes of being reunited with their long-lost loved ones.

“What was interesting is that after the Civil War, there’s a lot of movement of African Americans around the country,” Crew said. “Well, in fact, what they’re doing is trying to reconnect family members — trying to find people that were lost.”

Churches also became conduits for people to find their families through word of mouth. In addition to helping reunite lost loved ones, Black churches established schools to promote education and later became arms of the civil rights movement. Furthermore, as a foundation of faith and stability in the community, the churches gave Black people hope in the midst of difficult circumstances.

“Faith is what brings the community together with faces,” Crew said. “Faith gives you the kind of attitude and worldview in which you can forgive others for the kind of terrible things that they do and to move forward.”

Although the process of reuniting families proved difficult and sometimes impossible, the Black family unit strengthened as a “very strong institution” that was stabilized within the next generation, said Eric Foner, DeWitt Clinton professor emeritus of history at Columbia University.

He said many people tried to reconnect with family members through the Freedmen’s Bureau, an agency established by the federal government as a resource for formerly enslaved people. However, this system often proved unsuccessful because there was no real record of what happened to separated family members, he said.
“There were tragic results, because people were unable, in many cases, to locate family members,” Foner said, “or they face these problems where somebody may have remarried after 10 years of separation.”

Many Black families were also separated by far distances, making it difficult for family members to travel and find them.
During Reconstruction, an important part of strengthening the family unit was through marriage. African American couples married under slavery participated in legal ceremonies to make their relationships recognizable by law. This showed that the sanctity of marriage and the closeness between husbands and wives, as well as their children, was very important, Crew said.

Reunited families also had desires of acquiring land to establish communities and create generational wealth.
“The key thing in having land is having control over your own economic destiny,” Crew said, “and usually the first concern is your family. How do I take care of my family, my immediate family, and then my larger family? So that community building is an important part of the process.”

After Reconstruction, one of the ways African Americans were able to buy land was from those willing to sell it to them. In many cases, Black people who had land were renting it from a landowner, who required payment at the end of the year. Despite these challenges, according to Crew, about 15 percent of rural land in the United States during 1900 was owned by Blacks, compared to less than 1 percent now.

New disruptions arose with the Great Migration — the movement of over 6 million African Americans from the South to Northern and Western cities and states — which had a destabilizing effect on families, and is associated with issues relating to unemployment, low wages and poor housing conditions, Foner added.

Black families continue to experience financial disparities. According to 2019 data provided by the Survey of Consumer Finances from the Federal Reserve Board, the median wealth of white families is four to six times greater than the median wealth of Black families, based on data analyzing the Black and white wealth gap in middle- and older-aged families. While wealth increases with age for all families, the report also found that substantial wealth gaps between white and Black families persist throughout the lifecycle.

While Foner said he believes it’s important to preserve all history, African American history has often been sidelined and ignored for much of the nation’s past. He also said understanding the Black experience, including the inequalities and prejudices that Black people were subjected to, is crucial to understanding the disparities in the nation.

“That’s the explanation why there’s such a gap in wealth,” he said, “or a gap in life expectancy, or gap in, you know, other educational attainment or other divisions between Black and white in this country. You need to know the history to understand how the United States got into the divisive situation it’s in today. Without history, there’s no way of understanding the society we live in right now.”