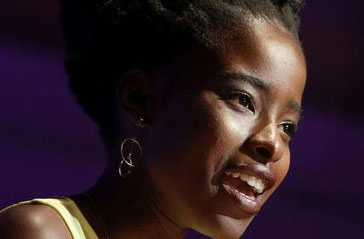 Smithsonianmag.com
As incoming President Joe Biden prepared to take the oath of office in a city still reeling from the January 6 attack on the Capitol, 22-year-old poet Amanda Gorman was charged with capturing the spirit of the moment.

Amanda Gorman’s first political memory is her mother reading her Miranda Rights. Gorman once said, “When you are a Black child growing up in America, our parents have to have what’s called ‘the talk’ with us. Except it’s not about the birds and the bees and our changing bodies, it’s about the potential destruction of our bodies.”

This afternoon, with her reading of an original composition titled “The Hill We Climb,” she did just that—and, in doing so, became the youngest inaugural poet in United States history.
“What I really aspire to do in the poem is to be able to use my words to envision a way in which our country can still come together and can still heal,” she told the New York Times’ Alexandra Alter ahead of the ceremony. “It’s doing that in a way that is not erasing or neglecting the harsh truths I think America needs to reconcile with.”

Growing up in Los Angeles, where her mother teaches middle school, Gorman began writing poetry as a child. At 16, she served as a youth delegate for the United Nations. Soon after that, she became the Youth Poet Laureate of Los Angeles and published her first collection, The One for Whom Food Is Not Enough. In 2017, while studying sociology at Harvard University, she was named the country’s first National Youth Poet Laureate.

Joe Biden’s Inauguration Speech in Full: ‘We Will Write an American Story of Hope’