Ketanji Brown Jackson
Takes Her “Seat at the Table”
Advertisement 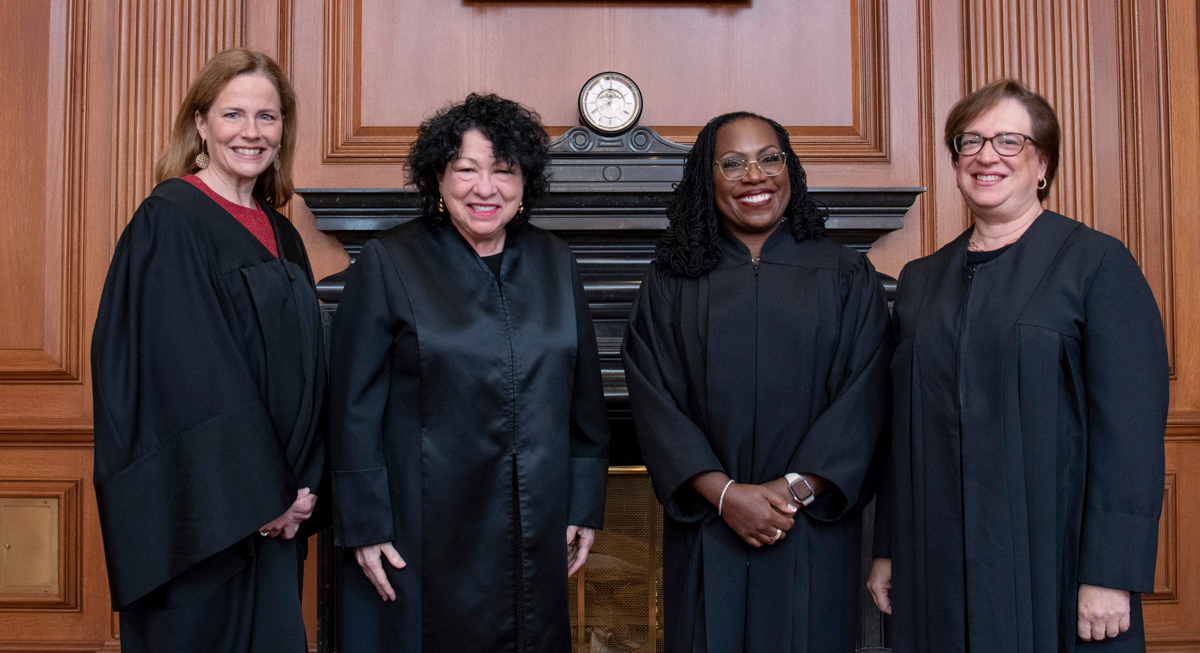 On the first Monday in October, Judge Ketanji Brown Jackson began her journey as an Associate Justice of the Supreme Court and the first Black woman to join that body.
And yet as this court term begins, she faces the reality of a court with its 6-3 conservative majority and what that means for the future of the fundamental principles of fair government.
Vice President Kamala Harris hailed her ascent saying, “Judge Jackson is a hero to so many Americans across our country. She will be the first Black woman on the highest court in the land.”

What is Moore v. Harper about?
In Moore v. Harper, the Supreme Court will decide whether the North Carolina Supreme Court has the power to strike down the legislature’s illegally gerrymandered congressional map for violating the North Carolina Constitution. The legislators have argued that a debunked interpretation of the U.S. Constitution — known as the “independent state legislature theory” — renders the state courts and state constitution powerless in matters relating to federal elections.

Last year, North Carolina’s Republican-dominated state legislature passed, on a party-line vote, an extreme partisan gerrymander to lock in a supermajority of the state’s 14 congressional seats. The gerrymander was so extreme that an evenly divided popular vote would have awarded 10 seats to the Republicans and only four to the Democrats. The map was a radical statistical outlier more favorable to Republicans than 99.9999% of all possible maps.
Because the U.S. Supreme Court has ruled that federal courts cannot hear partisan gerrymandering cases, voters contested the map in state court, contending that the map violated the state constitution’s “free elections clause,” among other provisions. In February 2022, the North Carolina Supreme Court agreed with the voters and struck down the map, describing it as an “egregious and intentional partisan gerrymander . . . designed to enhance Republican performance, and thereby give a greater voice to those voters than to any others.”
The unrepentant legislature proposed a second gerrymandered map, prompting a state court to order a special master to create a fair map for the 2022 congressional elections. Unwilling to accept this outcome, two Republican legislators asked the U.S. Supreme Court to step in and reinstate their gerrymandered map.

What has happened so far in the case?
The Supreme Court hasn’t made any substantive rulings yet. In March, the Court rejected the legislators’ emergency appeal to put the gerrymander back in place immediately. At the urging of four justices, however, the legislators filed a regular appeal asking the Court to consider whether to reinstate their map for elections after 2022. In June, the Court agreed to take up the case. The parties will file briefs over the summer and fall, with oral argument happening thereafter. The Court will likely issue its decision before July 2023.

The Elections Clause delegates to states the power to regulate federal elections while giving Congress the overriding authority to make or alter such laws. Proponents of the independent state legislature theory — like the gerrymanderers — read the Elections Clause to give state legislators near-exclusive authority to regulate federal elections, prohibiting any other state entity — like state courts or governors — from placing checks and balances on that power. In this case, the gerrymanderers are arguing that the theory licenses them to violate the state constitution when drawing congressional maps and that the state courts do not have the power to stop them.

What’s wrong with the independent state legislature theory?
The independent state legislature theory runs contrary to the constitutional text, history, practice, and precedent. The framers famously distrusted state lawmakers, so much so that when they drafted the Elections Clause, they insisted that Congress retain the ultimate power to set the rules for federal elections. The framers would not have established — and indeed did not establish — a regime that would permit state legislatures to regulate federal elections without the ordinary checks and balances that apply to state lawmaking power. State practice, from the country’s founding to today, also refutes the theory. For example, many framers — including James Madison — voted to adopt state constitutions that regulated federal elections, as North Carolina’s does today.

On top of this overwhelming historical evidence, the theory makes no sense: it would be absurd for a state legislature to be allowed to violate the very state constitution that created it. Other problems doom the theory, as an avalanche of recent scholarship demonstrates. For these reasons, the Supreme Court has repeatedly rejected the theory for over a century, including as recently as 2015 and 2019.
The Supreme Court could decide Moore without having to address the independent state legislature theory. As we have previously explained, the North Carolina General Assembly itself enacted the state constitutional provisions that prohibit extreme partisan gerrymandering and expressly authorized state courts to review and remedy unlawful congressional maps. In other words, the state courts just did what the legislature told them to do.

Why did the Court take the case?
The Supreme Court has not explained why it decided to take the case, although that’s not unusual. However, some justice’s statements at earlier points in the case shed some light. When the Supreme Court denied emergency relief to the gerrymanderers in March, three justices — Justices Samuel Alito, Clarence Thomas, and Neil Gorsuch — voiced support for the theory, as they had previously done in other dissenting opinions in 2020 elections cases. A fourth justice — Brett Kavanaugh — voted to leave the court-approved map in place for the 2022 elections, but he said that he saw “serious arguments” on both sides.
None of these justices, however, have had the benefit of oral argument and full briefing before formulating their perspectives. And crucially, whereas it takes five public votes for the justices to decide a case, it only takes four private votes for the Court to take a case for review. So the fact that four justices voted to hear Moore doesn’t mean that a majority is willing to endorse the unprecedented arguments offered by the state lawmakers in the case. The Court could still reject the theory and reaffirm the way our elections have worked for over two centuries.

What are the broader stakes?
The immediate issue in Moore is whether the state legislators’ extreme partisan gerrymander will stand in North Carolina. But adopting the independent state legislature theory would also mean that voters across the country have no judicial remedy — in state court or in federal court — to fight partisan gerrymandering.
The potential consequences could stretch still further. The theory would throw elections into chaos, nullifying hundreds of election rules put in place through ballot initiatives, state constitutions, and administrative regulations — including foundational state policies like the processes for voter registration and mail voting and basic guarantees like the secret ballot. State lawmakers would be able to adopt vote suppression legislation without any checks or balances from state courts or even gubernatorial veto. In other words, the theory would upend key aspects of our elections.