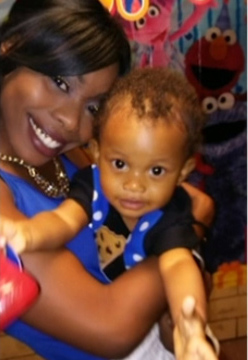 Nyashia Ferguson could not believe her eyes. Neither would she, a client at the HRA building on Bergen Street on Friday, December 7th, believe the pivotal role she was about to play in the traumatic scene unfolding before her. Like Ramsey Orta, who shot the Eric Garner video footage seen around the world, Ferguson captured (with her cell phone) those incredibly disturbing moments with Jazmine Headley on the floor surrounded by cops who were literally tearing her toddler son from her arms.

Headley went to the HRA offices to obtain a voucher for her son’s day care so that she could return to work after the city suspended payments without warning.

Ferguson posted the video on Facebook (where she goes by the name Monae Sinclair), summing up what she witnessed when Headley, 23, who’d been waiting four hours to be seen, refused a security guard’s order to get up from the floor. She’d been sitting there holding her child because there were no vacant seats.

“There was nowhere to sit,” Ferguson recalled, “so the lady (Headley) sat on the floor with her son and the security guard… came over and told her she couldn’t sit there. She said, ‘So where am I gonna sit?’”

The security guard called police, who proceeded to violently yank Headley and her 17-month-old son Damone Buckman III around. After wrestling him from her arms, they handcuffed her and sent Damone to the Administration for Children’s Services (ACS). He was later placed in his grandmother’s custody.

“That child was in danger!” said Ferguson. “He was screaming. He was screaming! His face was so red! I was scared. I had my little daughter with me. She’s only seven months and this (one) officer is pulling out taser guns. She had it in the lady’s face and the baby’s face.”

The video also shows this officer brandishing the Taser at onlookers as she orders them to stand back.

Scott Hechinger of Brooklyn Defender Services, which is representing Headley, said on Twitter that Damone had been twice taken to the hospital to be examined for “lingering bruising” but is “fine.” Headley, who Hechinger says was physically unharmed, can be heard on the video shouting, “They’re hurting my son!”

Ferguson and others present were witnesses to the emotional trauma inflicted. She posted in her video caption on Facebook: “[The mom] made the security guard feel dumb so she called the cops on her and this was the outcome.  She had her baby in her hands the whole time. I’m so f–ing disgusted with the NYPD. EVERYBODY PLEASE SHARE!!!””

And share they did: on Facebook, Twitter and other social media and word traveled the world via domestic and international news media. Without the video, the trajectory of Headley’s life going forward might be different and the liquid fire of outrage that blazed – first across New York City – might not have ignited.

Headley was charged with resisting arrest, obstructing governmental administration, trespassing and – most infuriating to many New Yorkers – acting in a manner injurious to a child. Her arrest was met with swift and energetic responses from several local politicians.

Brooklyn DA Eric Gonzalez said he was “horrified” over what he’d seen on video. “The consequences this young and desperate mother has already suffered as a result of this arrest far outweigh any conduct that may have led to it,” he said.

Gonzalez dropped the charges and a court orderissued by the court barring Headley from seeing her son was lifted. But it took five days for a judge to order her release due to an outstanding bench warrant in a 2016 credit card fraud charge in Mercer County, New Jersey. Headley’s lawyer says she wasn’t involved, but was in a car with a man who stole the cards. She was due to appear in court there on Wednesday as we went to press.

PBA President Patrick J. Lynch did not agree. “The event would have unfolded much differently if those at the scene had simply complied with the officers’ lawful orders,” he said. “The immediate rush to condemn these officers leaves their fellow cops wondering: when confronted with a similar impossible scenario, what do you want us to do? The answer cannot be ‘do nothing.’”

But the public and several elected officials are clear about the something they want to see done: discipline for those cops who were most aggressively involved – a sergeant and three officers from the 84thPrecinct, all believed to be Black females. Two of them appear particularly violent on video. Two HRA “Peace Officers” will be on “modified duty” when they return from a mandated leave, but no word yet on what departmental charges the NYPD officers might face, if any. This, after the American Civil Liberties Union just lost a six-year battle when the state Court of Appeals ruled the NYPD can withhold certain police misconduct records.

“Under this ruling, we are never going to know if those officers are going to be disciplined by the NYPD,” said Christopher Dunn, ACLU associate legal director. “Whether you think they should be disciplined or not, there’s no question the public should know what happens with these officers, one way or another.”

In addition, Brooklyn Borough President Eric Adams pointed out that the company employing the security personnel, FJC Security Services, has faced 16 lawsuits from shelter residents since 2013 and called for an investigation into the business. He addressed the incident outside the SNAP office on Monday.

“Alongside Brooklyn Defender Services, I’m demanding reforms to the NYC Human Resources Administration and the NYPD that would help ensure this incident is not replicated in the future,” said Adams.

A rally on Headley’s behalf was held at City Hall on Tuesday with elected officials and others calling for justice and more humane practices by the NYPD.

“I’m blessed to be here with my son on our way to daycare, but I’m not letting my title speak for me. I’m speaking out as a Black woman here in New York who is demanding justice for Jazmine Headley… It’s dehumanizing and we have to rise up to make sure that people get the message loud and clear that we will not tolerate this kind of action against our community and against Black women.”

Jazmine Headley, having spent those five days at Rikers, was unaware of the massive amount of attention her mistreatment had garnered. On her release she was emotional, but made sure to address her supporters.

“I want to thank everybody for all the support I’ve been getting in New York and all the great people who’ve been supporting me. I haven’t gotten to read all of the articles. And all of the love. I’m receiving it and I’m so grateful to everyone! I’m just happy to be free and I just need to see my boy.”

New Yorkers will be glad to see Headley get her life back. And a watchful eye should be kept on Nyashia Ferguson. We might not know about Headley if not for her and we must ensure that she does not meet the unjust fate of her fellow video whistle-blower Ramsey Orta.