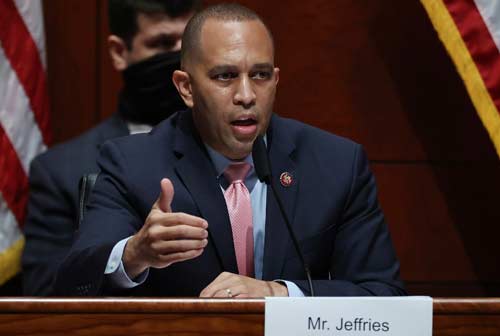 By Hayley Miller,
www.huffpost.com
A California man was arrested and charged Tuesday with making threats against family members of a top Democratic congressman and a journalist the same day an insurrectionist mob attacked the Capitol earlier this month.
On the same day as the January 6th insurrection, Robert Lemke, 35, sent threatening text messages to the brother and sister-in-law of Rep. Hakeem Jeffries (D-N.Y.), warning that armed supporters of then-President Donald Trump were near their house, according to a criminal complaint unsealed in Manhattan federal court. One of the texts included a picture of a home in the same neighborhood as Jeffries’ brother.

“Your brother is putting your entire family at risk with his lies and other words. We are armed and nearby your house,” Lemke allegedly wrote in one text to Jeffries’ brother. “You had better have a word with him. We are not far from his either. Already spoke to [the Congressman’s son] and know where his kids are.”
“Stop telling lies; Biden did not win, he will not be president,” he wrote in a subsequent text, according to the complaint. “We are not white supremacists. Most of us are active/retired law enforcement or military. … Don’t risk their safety with your words and lies.”
Lemke identified himself on Facebook as a former sergeant with the Alameda County Sheriff’s Department and a former captain in the U.S. Air Force, the complaint stated. The sheriff’s department denied that Lemke ever worked there, and the Air Force said they had no record of his service, The New York Times reported.

Lemke ― who was arrested in Bay Point, California, located about 30 miles northeast of San Francisco ― also allegedly sent disturbing texts that day to a journalist’s family member.
“[The Journalist’s] words are putting you and your family at risk,” Lemke allegedly wrote. “We are nearby armed and ready. Thousands of us are active/retired law enforcement, military, etc. That’s how we do it.”
Though the complaint did not identify the journalist, referring to him only as “Journalist-1,” the Times identified him as ABC News’ George Stephanopoulos, citing a person briefed on the investigation.

The U.S. attorney’s office did not immediately respond to HuffPost’s request for comment. ABC News declined to comment.
In an interview Tuesday with MSNBC, Jeffries, chair of the House Democratic Caucus, called the threats “chilling” and blamed Trump and his allies for provoking Lemke and the Capitol rioters by spreading lies about the election.
“He was radicalized by the ‘Big Lie’ that Donald Trump told and that has been supported by so many Republicans in the House and the Senate,” Jeffries said.
Jeffries said his brother received the texts at the same time members of Congress were being evacuated from the House and Senate chambers during the attack.
“Those images were being broadcast to family members of members of Congress all across the country who were uncertain as to what was happening to us,” Jeffries said. “It was clearly designed to instill terror, and I’m just thankful that law enforcement officials have apprehended this individual and will allow this process to play itself out.”
Lemke has been charged with making threatening interstate communications, which carries a maximum sentence of five years’ imprisonment. He is expected to appear before a federal judge on Wednesday.

The FBI so far has identified more than 400 suspects connected to the Capitol riot, the Justice Department announced Wednesday. More than 150 criminal cases have been filed so far, with charges that include theft, damage to government property and assault on law enforcement officers.