For Brooklyn and Beyond: “Voices of Moral Clarity” Stir Hope for the Next Generations
Advertisement 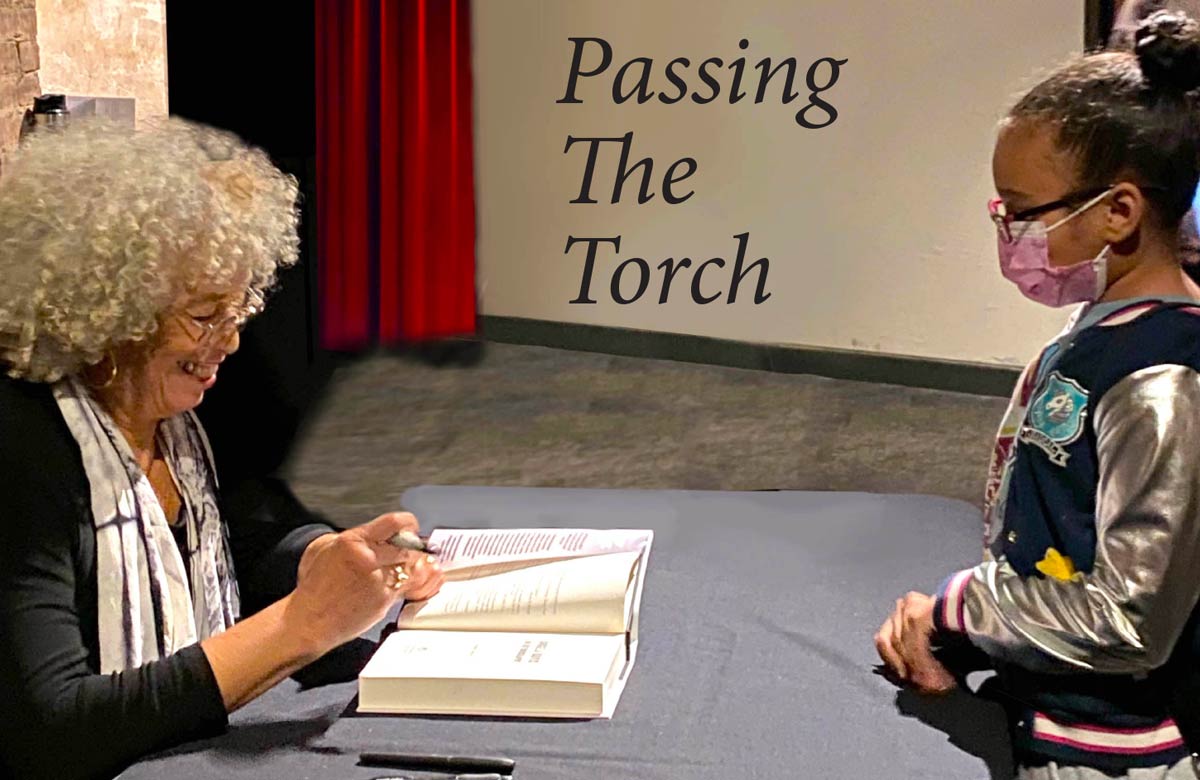 Liberating Moment at BAM: On Friday, December 2, photographer Toure Muhammad’s photo above captured the exact moment Angela Davis, the powerful political activist at the cutting edge of Liberation movements for some 50 years, smiled while autographing a copy of her 1974 biography for his daughter, age 8. Ms. Davis is a fierce, outspoken supporter of young people and their abilities to harness strengths to lead movements. Toure’s poem, inspired by this scene and dedicated to Ms. Davis and his daughter, appears on Page 12 with Part One of a Two-Part Series on “An Evening With Angela Davis,” written by sisters Lynette C. Williams and Angela M. Williams, who stood on line with Our Time Press that night. (BG) (photo credit: Toure Muhammed/Vizual Mercenaries Studios)

From SHEro to Namesake:Reflections on Angela Davis by Lynette C. Williams and Angela M. Williams

I was a girl when a seed was planted that would shape my life. My father, deeply involved in the civil rights and labor movements, nurtured this seed by teaching and explaining every aspect of his involvement – the purpose, the importance, and the consequences. In sparking my interest and curiosity, a young activist was sprouting.

Naturally, this firsthand education and exposure opened my young mind to the challenges of racism, oppression, poverty, police brutality, and all types of inequalities. I understood activism, and I understood that activism leads to action. I was ready to act! The Black Power movement captured my attention; then I discovered the Black Panther Party for Self-Defense. I learned about the Black Liberation Movement, and inevitably I became aware of Angela Davis.

Angela Yvonne Davis. She was black, she was smart, she was vocal, she was fearless, AND we shared the same birthday – she was my SHEro!
In the 1970s, the Free Angela Davis movement was paramount in my life. I had become extremely involved in community groups, protests, and organized events addressing the needs of the black community. My parents were expecting my youngest sibling during this time, and they finally acknowledged me as an activist. Somehow, I convinced them to name the baby “Angela” if it was a girl. Now, I have a sister named Angela.

In 1998, I met Angela Davis at a book signing in New Orleans, where we could have a conversation and take pictures. Thanks to my father, and Angela Davis, I remain an activist – it is not always the same movement. The important thing is to affect change wherever life takes you and to stay ready for the revolution, right?
Surely, you wonder what happens when a little girl is blessed with such a powerful name? I invited my younger sister, Angela, to reflect on and share the impact of her namesake.
“Angela Davis!” my Godfather greeted me, with a knowing and prideful tone in his voice, throughout my childhood and adulthood. Anyone who knew the story of my naming called me Angela Davis at some point. New acquaintances would just call me Angela Davis in what seemed to be an association technique to help them remember my name. It even happens NOW!

As a little girl, I wondered, ‘WHO is this woman?’ and I’d sometimes declare, ‘my name is Angela Williams, not Davis!’ followed by a little girl eye roll. They’d say, ‘Angela Davis is your namesake’ or ‘you were named for Angela Davis.’ To me, she was a serious-looking woman on the cover of a book entitled “If They Come in the Morning,” authored by Angela Y. Davis. Oh, she is an author, hmmm. Ok. I can accept that – I am named for an author. That was enough for me as

A school-aged girl. I began to muster more pride in my name, so much more pride; I’d tell my white elementary school teachers, “I am named for Angela Y. Davis!”. The LOOK always gave it away – there was much more to know about this intense-looking woman on the cover of that book.
Militant. Black Panther Party. FBI. Most Wanted. Communist. Radical. Jail.
These were words associated with Angela Y. Davis in the 1970s. My eagerness to share earned me a place on my teachers’ watch list. The mention of her name caused a white teacher’s neck to whip around from the blackboard with a raised brow of concern. I knew then that this woman was more than an author. She must be someone awesome.
Activist. Feminist. Professor. Philosopher. Politics. Racial Equality. Gender Equality.
Culture.

These were words associated with Angela Y. Davis after my elementary school days. As I dug a little more, read a little more, and watched a little more, my pride and understanding grew. Then, I wondered – is a person supposed to emulate their namesake? I had no idea where to find the Black Panther Party in Brooklyn at 12 years old.

Lynette and Angela remain active through their support, advocacy, and involvement in various community-based organizations in Brooklyn. Lynette resides in Bedford-Stuyvesant, and having worked for the NYC Department of Education; she continues to work with people to effect change in their lives as a therapist. Angela is a member of Delta Sigma Theta Sorority, Inc. ~ East Kings County Alumnae Chapter, serves on non-profit boards such as the NY Presbyterian – Brooklyn Methodist Hospital Community Advisory Board, and resides in East Flatbush.