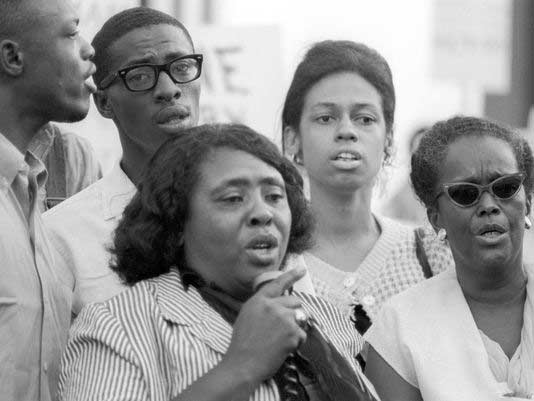 Fannie Lou Hamer’s America: An America Reframed spotlights the story of the late activist icon , a prominent voice of the civil rights era — from her roots in the cotton fields of Mississippi to her rise in the halls of Congress and global communities where her voice still echoes, will have its world premiere on PBS and World Channel, Tuesday, February 22 9:00am – 10:30PM, on PBS; andand on WORLD Channel on Thursday, February 24 starting at 8:00pm.*

The film airs at a time when Black women are being acknowledged for their work at the forefront of the fight for voting rights amidst unprecedented voter suppression efforts targeting citizens of color — in the spirit of Hamer’s famous quote, “Nobody’s free until everybody’s free.”
Produced by Ms. Hamer’s grandniece, journalist Monica Land and Joy Davenport, the powerful documentary captures the pure essence of the leader by presenting her through her own words, speeches, interviews and songs.
Through rare footage and recordings, some not seen or heard in half a century, Hamer tells her story — and that of America — more than four decades after her death. The brainchild of Land and featuring the directorial debut of Davenport, the film offers photos, documents, performances and sources, some unearthed by family members, to a new generation of audiences called upon to take up the mantle of preserving American democracy.

Fifteen years in the making, Fannie Lou Hamer’s America presents the daughter of Mississippi sharecroppers’ passion and commitment to voting rights and economic justice and her rise to national prominence.

The film captures Hamer’s resistance as she works to register Black voters, runs for Congress, fights for economic opportunity in her home state and more — all while government leaders, the media and even her civil rights peers tried to silence her.
Young viewers, who may not be familiar with Ms. Hamer’s importance in American history, and older viewers who may have lost perspective on her impact on their lives, will be spurred to discuss “Fannie Lou Hamer’s America” when they hear for the first time, or recall, her passionate cries: “I’m sick and tired of being sick and tired” and “Nobody’s free until everybody’s free” . In fact, the documentary will show that for some groups, Ms. Hamer’s \ words are beginning to touch the heart of a new American generation and are emblazoned on placards at rallies across the country.

“Fannie Lou Hamer put her life on the line working to ensure that America lived up to its promise,” said Davenport. “She urged us to look directly at the truth of this country. In the decades since her death we’ve collectively looked away, but to a sick and tired nation that yearns for the American dream, her message remains painfully clear: it’s time to wake up.”
The film opens season 10 of the Peabody Award-winning America ReFramed series coproduced by WORLD Channel and American Documentary, Inc.
*Beginning on February 22, the film also streams on worldchannel.org, WORLD Channel’s YouTube Channel and on all station-branded PBS platforms, including PBS.org and the PBS Video app, available on iOS, Android, Roku streaming devices, Apple TV, Android TV, Amazon Fire TV, Samsung Smart TV, Chromecast and VIZIO.
The film will also stream through Women’s History Month.
Fannie Lou Hamer’s America: An America ReFramed Special is a coproduction of Monica Land; The Bitter Southerner; GBH WORLD Channel; American Documentary, Inc.; and Black Public Media with support from the Corporation for Public Broadcasting.