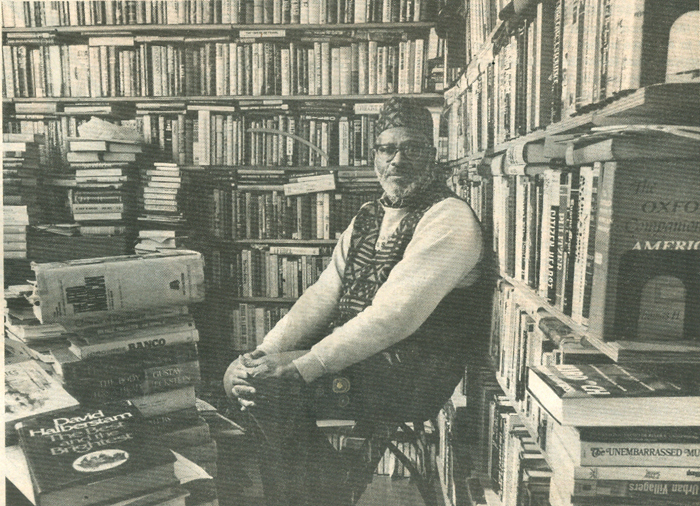 Over the years we’ve had the opportunity to meet and interview historians, artists and thought leaders. One friendship we formed and particularly cherish, was with Professor William H. Mackey, who held class every Thursday evening in the basement at 850 St. Marks Ave.
Below are excerpts from extended interviews at www.ourtimepress.com

“The education system has a long history of dehumanizing people,” Mackey says. “The truth is not being put out there. It’s a continuing struggle trying to steer away from misdirection and miseducation. It’s so easy to delude ourselves into thinking that what we are being told is what really is. Positive insanity is the only rational outlet. I believe we can do it ourselves and learn everything we need to know right in the village. It’s not a new way of thinking. But I would never tell you what to think. I will advise you not to compartmentalize anything. Everything ties in. Knowledge is all around, if you use all your senses, you’ll find it.”

On Power, Comfort Zones, Demons.
Now when you talk about children not developing or progressing because they come from troubled or so-called dysfunctional homes — our children? — that’s a whole ‘nother thing. I ask, “Is that actually true?”
I am in the counter-class. I’m an idol-smasher. My empirical experience — and I don’t pass it off as some kind of laying down of the final word — has convinced me that the problem in society is not so much in terms of family, but in terms of the people in the society that make the decisions. That power thing!
Some people might say that’s an easy cop-out. But I’m prepared to explain this. History shows us whenever a society is in trouble it has this tendency to blame the least powerful unit in the society. Let me give you an example: in the society we live in, the concept of power is based on race–and I’m using this objectively. This is not a passionate thing. This is observation. It has always been based on race, particularly in terms of how power is distributed or not distributed.
No ruling class likes to have its comfort zone disturbed. Whenever it is messed with, there is a tendency to blame someone, the designated demons, the bogeyman. That term is not used so much as I am aware of, these days, but when I was growing up in the South, it was standard procedure to hear a white mother say to their children, “If you don’t behave, I’m going to get the bogeyman after you!”, while pointing to a Black person.

What is being done here? You’re deliberately creating a concept of the demon. And things that threaten them are always considered anything or anyone of darker hue. How does it tie in? Very simple. When you look for a demon to blame, you are looking to escape responsibility. That’s why the term scapegoat exists in this society. In earlier societies, if something negative happened and the group or clan could not explain it, they took an animal and beat it and hoped to God this would please the gods! What you are doing is protecting your comfort zone. Once you can convince yourself that these things are happening to me because of some outside force, and these are the folks who are doing these things and causing these things to happen to our family, it may not change things from happening but it absolves you of any responsibility and guilt. Now, more and more, as a society becomes more sophisticated, there is a need for more denials.

The demon could be Blacks, Muslims, Native Americans… anybody who is different. And the less concrete information you know about others, outsiders, the more you demonize them. You don’t even think about it. You wake up in the morning. If it’s raining, you say, “Oh yeah, it is so and so’s fault. It’s a bad day; they did this.”
All this has to do with disturbing the comfort zones of those folks for whom the system theoretically works. Now let’s go back and look at the concept of family in this society. My grandmother, Harriet Sibley Weston, didn’t know what the hell a behaviorist was. When I didn’t behave, I got my butt handed to me. But do we know all victims or perpetrators? As society becomes more technologically oriented, as more and more of these new inventions and new creations come online, they’re supposed to make life easier for you, but they really don’t. Who’s at fault? Is it me? Is it you? Do we really want to deal with this? One of the things that’s very difficult for people in a so-called techno-society to deal with is that they have been programmed to think that things are going to get better, but it isn’t. This is a culture that constantly thinks in terms of progress, meaning progress on whatever level you’re on. It means that whatever happens this week, you’re supposed to be on a higher-level next week, always be moving upwards. No retrogression. Just progress. And what’s it all based on?  Statistics.