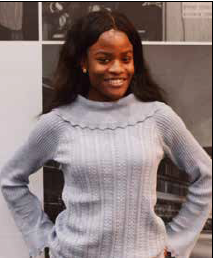 Aziza Pope, Israel Ali and Carlos Mayers, three bright and ambitious college freshmen from Bedford-Stuyvesant, were awarded the 2017-2018 Elsie E. Richardson Scholarship. This is the second year of the scholarship founded by Richardson’s granddaughter, Celeste Moses, paying homage to Ms. Richardson’s legacy of civic-mindedness and public service. The $1,000 prize is awarded to applicants who wrote about their commitment to community and about resilience in the face of adversity.

Aziza Pope, an alumna of Brooklyn High School of the Arts, studies Biology at Saint Augustine’s University in Raleigh, NC.  When asked about her post-college career aspirations, Aziza said she wants to be a dentist. “I want to help my community access the dental care they need at affordable prices,” she says. “I like to see people smile.”

Israel, an alumnus of Benjamin Banneker Academy, is attending Albany State University in Albany, NY and studies computer science. Alluding to the scarcity of minority students in STEM fields, Israel says part of his motivation in choosing his academic major is to show other people in his community that, “…people who look like them can learn about technology and use it as a force for positive change.” Carlos, an alumnus of Xaverian High School, is also studying computer science at Hampton University in Hampton, VA. He wants to serve his community as an entrepreneur and a technology educator. “People in our communities have an attitude that starting a technology business is beyond their capabilities,” he says. “I want to show them it can be done.”

The dreams of this year’s winners, inspired by the bold activism and perseverance of Richardson, is a good indicator of the future for Bedford-Stuyvesant. Celeste Moses shared these words to the scholarship winners: “On behalf of the family of Elsie Richardson, I would like to thank Restoration in keeping her legacy alive. Elsie Richardson was such a believer in the youth whom she would encourage to believe that they can achieve any goal, regardless of circumstances and/or obstacles.”

OTP joins Ms. Richardson in wishing these young people great success in their pursuit of higher education and their desire to give back to their community.