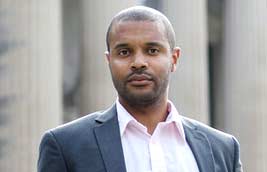 The upstart Democratic Socialists of America (DSA) continued to show their muscle in Brooklyn tonight as Jabari Brisport appears to have enough votes to overcome and mail-in ballot votes to win the Democratic primary for the 25th District state senate seat.
The seat opened up with the retirement of State Sen. Velmanette Montgomery (D-Fort Greene, Boerum Hill, Red Hook, Bedford-Stuyvesant, Sunset Park, Gowanus, Park Slope). As Brooklyn, with the exception of parts of Southern Brooklyn, is a one-party borough, the Democratic Primary is for all practical purposes the election that decides who will be elected in the November general election.

According to the unofficial Board of Election (BOE) results, Brisport had 52.70% or 17,113 votes to second-place finisher Assemblywoman Tremaine Wright who had 40% or 13,301 votes. Jason Salmon garnered 1,857 votes.

“It’s a new day in New York Politics and working-class people are taking charge of our government to build a future where all of us can not only survive but thrive,” said Brisport’s campaign manager Fainan Lakha.

While Brisport appeared to win handily in a rapidly gentrifying district, his DSA counterpart Phara Forrest narrowly lost to incumbent Assemblyman Walter Mosley (Fort Green, Clinton Hill, Prospect Heights, Crown Heights) in a district that overlaps with the senate district.
According to the unofficial results Mosley received 7,301 votes (52.36%) to Forrest’s 6,606 (47.37%).
“I’m honored to win and have both the Democratic Party and Working Families Party line in the general election. We’ve accomplished a lot in strengthening tenant laws and dealing with the issue of police misconduct and we have more to do,” said Mosley. “I look forward to continuing the dialogue with those who voted for me, but more importantly with the people that didn’t vote for me as I represent everybody in the 57th district.”

In one of the more interesting races, Richardson ran against former State Sen. Jesse Hamilton and was the only incumbent running who did not get the endorsement of the Kings County Democratic Party. This hardly mattered, though, as she soundly beat Hamilton in getting over 71% percent of the vote (8,570) to Hamilton’s 3,447 votes.
Also retaining the Democratic nomination were veteran Assemblymembers Joe Lentol (D-Greenpoint, Williamsburg) and Felix Ortiz.

Clarke Wins Primary in a Landslide