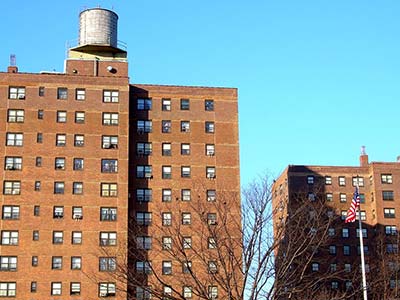 Which May Lead to High-Speed Gentrification and Displacement of Residents

It looks like gentrification in East New York might happen faster than we thought. It was recently reported in Crain’s and The Real Deal that New York City officials are handing management of NYCHA over to private developers for $1.5 billion. Two of the main private developers in the deal, L & M Developers and The Hudson Companies, will be taking over management of Linden Houses and Boulevard Houses in East New York.

New York City officials are well aware of the history of racism and bias in rental and maintenance practices by some private developers that act as landlords, and there is no reason to think the same biases are not going to occur with private developers managing NYCHA properties. Bias practices have led to citywide gentrification, while leaving people of color struggling to find affordable housing.

According to an article on 6sqft.com, “The Housing Authority may also sell its unused air rights and/or accelerate a plan to allow developers to build market-rate apartments on underused land owned by the authority. According to Politico, the plan calls for a 70-30 split of market-rate to rent-regulated housing in private developments on public land.”

In the new residential buildings along the Elton St. corridor next to the Gateway Mall, which The Hudson Companies developed and The Related Companies manages, there have been sewer backups inside of the buildings since the buildings opened. The question has to be asked, how were these private developers selected with Hudson currently having problems with their new development in East New York?
“I have personally suffered from multiple raw sewer backups in my restaurant in the past three years with the most recent one occurring only two months ago, resulting in almost $300,000 in lost revenue and repairs,” stated Andrew Walcott, owner of Fusion East Restaurant, which is located in one of the buildings in East New York that was developed by The Hudson Companies and managed by The Related Companies.
Walcott added, “Representatives of Hudson and Related continue to blame the tenants and refuse to accept adequate responsibility for poor maintenance policies regarding the new buildings they own and manage on Elton Street in East New York. These issues have existed for years and are not exclusive to my business. What’s really sad is that I have been a member of Community Board 5 for 20 years and the Executive Members of Community Board 5 know in detail of the poor maintenance situation of the buildings on Elton Street. With that being the case, the Board should question how can Hudson be trusted to manage 6,000 aging public housing apartments, when they can’t properly manage 600 relatively new apartments on the Elton Street corridor of East New York.”

I have to thank EastNewYork.com for giving me a platform to bring this information to the residents of East New York while elected officials and Community Board 5 keep quiet on the issue. At the very least, community leaders should be informing the residents that NYCHA is being sold to private developers and how it will impact their housing, now and in the future. Keeping quiet is not the answer. Residents need to be informed.

I hear the excuses that there was nothing elected officials can do about it, the management of NYCHA has been bad for years, and so on. The fact is NYCHA residents will eventually see rent increases and displacement while East New York, in general, will see gentrification 2.0 at warp speed. Maybe if the residents were able to participate in the conversation, they could have assisted with coming up with an answer other than selling out to private developers.

Gentrification and displacement happened in Harlem, Bed-Stuy, Bushwick, Red Hook, and I can go on and on. East New York and Brownsville were last but now it’s at our doorstep.  Prepare yourself by getting your credit right and saving your money. Many will have to leave, but at least you now have the knowledge to know that gentrification is knocking at your door, NYCHA has been sold and your local leaders cannot, and have not, done anything about it. You must empower yourself.
Knowledge is power. Take this situation seriously and share with your family and friends. Be prepared for what is coming.

I will try to find out more information and I will surely share with my fellow East New York residents. We’re in this thing together. Let’s be smart.