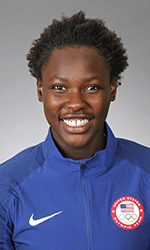 Andrea Lawful-Sanders has a ritual for cheering the black heroines of the Summer Olympics.

She gets into her corner of the living room, sets up her chair, demands silence before screaming at the top of her lungs, flails her body wildly and — in keeping with her Jamaican-American heritage — bangs pot covers together to celebrate victories.

From Simone Biles’ gravity-defying flips to the history-making medal trifecta of the U.S. women racing in the 100-meter hurdles, many of the Olympics’ most memorable moments have come courtesy of African-American women. Their accomplishments in Rio have spurred excitement and pride at home in the U.S., particularly for black women who say they are seeing themselves in the Olympic Games like never before.

“While everybody else is talking, we are doing,” said Lawful-Sanders, 50, of Philadelphia. “When we excel, nobody can take that away from us — ever. They may try to marginalize us, but how can you marginalize excellence?”

With competition continuing through Sunday, America’s black female athletes have won more than two dozen of the 100-plus U.S. medal haul.

Black women haven’t just shined in this year’s Olympics, they’ve been ubiquitous — from gymnastics to water polo, fencing to swimming. Previous Summer Games featured black women mainly in track and field and, more recently, in gymnastics. Fans at home had to wait days to cheer on sprinter Florence Griffith-Joyner or gymnast Dominique Dawes.

“It is very interesting to see black women going into areas where you really don’t see black women competing, with all different body shapes, complexions and hairstyles being represented,” said Kaye Wise Whitehead, a professor at Loyola University who studies race and gender. “Black women see and feel that there is no door closed to us … and that we’re not just walking through those doors, but we’re dominating.”

In Rio, the two Simones — gymnast Simone Biles and swimmer Simone Manuel — both stood atop the podium on a night that made history, with Manuel becoming the first black woman to win an individual medal in swimming. In all, she took home four medals and Biles five. Biles was chosen to carry the American flag for the U.S. team in Sunday’s closing ceremony.

Michelle Carter became the first American woman to win gold in the shot put. Fencer Ibtihaj Muhammad, who won a bronze medal in the women’s team sabre event, was the first Muslim-American woman to compete for the U.S. in a hijab.

Jacqueline Wills has loved rooting on female gymnasts since she was a child watching the Olympics. During these games, as she lost count of the numerous black women winning, her cheers went beyond just Biles.

“At this point, it’s like too many to name,” said the 38-year-old who lives in Brookhaven, Georgia. “It’s the same reason we cheer Michelle Obama when she does something fabulous: It’s (a black woman) doing things well and on their own terms and being unapologetically black. Those images kind of reaffirm us.”

Some said the Olympics also provided a much-needed respite from racial tensions at home.

“It is a good distraction and a good way to celebrate our successes, even as the world may not appreciate us,” said Luvvie Ajayi, a pop culture blogger and author. In a Facebook post, Ajayi quipped: “Black women had a secret meeting before #Rio2016 and the only thing on the agenda was: ‘TAKE ALL THE MEDALS.’ And it was done.”

“Black women are showing that we’ve always been a force to reckon with, but now … we’re showing that we kind of are superheroes that are real,” Ajayi said in an interview. “We are really unstoppable; we can dominate at anything we want to do.”

Black women have also felt the struggles of their athletic counterparts at the games. Many took to social media to defend veteran gymnast Gabby Douglas amid remarks that she lacked patriotism for not placing her hand on her heart during the national anthem, that her hair was not polished enough and that her attitude was unsportsmanlike.

The stereotype of the “angry black woman” was familiar to Wills.

“That is one of the things that comes with being a black woman in this country,” she said, adding that she tried to shrug off the criticism in a Facebook post.

As the games come to a close this weekend, Lawful-Sanders is warming up her pot covers for a few more chances to cheer.

“We have made up our minds that we are going to give it the best that we have, and we are watching it manifest in the Olympics,” she said. “It’s black girl magic. We are tired of being told that we couldn’t or we shouldn’t. … We’re taking no prisoners and I’m enjoying every second of it.”

Errin Haines Whack covers urban affairs for The Associated Press. Follow her on Twitter at http://www.twitter.com/emarvelousand read more of her work at http://bigstory.ap.org/journalist/errin-haines-whack .