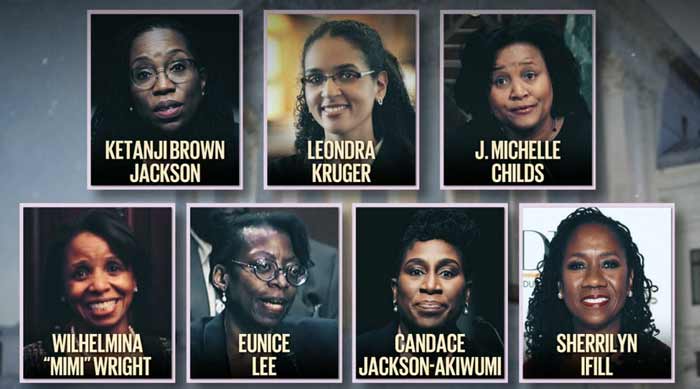 President Joe Biden made a campaign promise to nominate the first Black woman to serve on the Supreme Court, and he’ll now have his chance, given widespread reports that Justice Stephen Breyer will retire at the end of the current term.
Supreme Court justices in the modern era tend to have similar resumes — eight out of nine served as federal appellate judges before their nominations to the nation’s highest court. Biden will likely consider nominees who don’t fit this mold, given that just five of the nearly 300 federal appellate judges were Black women when he took office, though he appointed five more in the past year.
Here are some of the leading candidates:

Judge Ketanji Brown Jackson
Biden nominated Jackson to the U.S. Court of Appeals for the District of Columbia last year, in a move that was seen as paving the way for her eventual accession to the Supreme Court. The D.C. Circuit of Appeals is considered the second-most powerful court in the country, given that it’s a venue where many important issues of constitutional and administrative law are decided.
Jackson’s relative youth is also a factor in her favor. At age 51, if confirmed she would likely remain on the court for decades. Given the infrequent and random nature of Supreme Court vacancies, presidents in recent years have nominated younger justices in the hope that they will serve longer. Justice Amy Coney Barrett was just 48 when she was nominated by former President Donald Trump and confirmed in 2020 on a party-line vote in the Senate.
Jackson also benefits from the president already having vetted her for the D.C. circuit role, while three Republican senators, Lindsey Graham of South Carolina, Susan Collins of Maine and Lisa Murkowski of Alaska voted with Democrats in favor of confirmation.

Justice Leondra Kruger
Kruger has served as a justice on the California Supreme Court since 2014, when then-Gov. Jerry Brown made her the youngest nominee for the state’s highest court. Her youth is also an asset: at age 45, she would be the youngest person to be confirmed to the Supreme Court since Clarence Thomas joined the body in 1991 at age 43.
Prior to her appointment to the California court, Kruger served as acting deputy solicitor general during former President Barack Obama’s administration, where she argued numerous cases before the Supreme Court. Kruger also served as a clerk for the late Justice John Paul Stevens in the early 2000s.

Judge J. Michelle Childs
Childs serves as a judge on the U.S. District Court for the District of South Carolina, and is reportedly favored for the position by powerful Rep. James Clyburn, the third ranking Democrat in the House and whose endorsement of Biden before the South Carolina Democratic primary was seen as pivotal for his securing the party’s presidential nomination.
Childs’ nomination would also bring a different type of diversity to the court, given that she received all her degrees from public universities, unlike the nine justices sitting on the court today, eight of whom received their law degrees from Harvard or Yale. Justice Amy Coney Barrett received hers from Notre Dame.
Other names being floated for the role include Judge Junice Lee, who served for two decades as a appellate lawyer for indigent criminal defendants in New York before Biden nominated her to the U.S. Court of Appeals for the Second circuit and Judge Candace Jackson-Akiwumi, another former public defender who was nominated to the federal bench at the recommendation of Democratic Senate Judiciary Chairman Dick Durbin of Illinois.

Additional Possibilities
Wilhelmena “Mimi” Wright
Wright served as a law clerk for Judge Damon Keith. She worked at the law firm of Hogan & Hartson, LLP, in Washington, D.C. before joining the U.S. Attorney’s Office in Minnesota.
Wright has earned numerous awards during her career, including the Myra Bradwell Award in 2006 from the Minnesota Women Lawyers, the Lena O. Smith Achievement Award from the Black Women Lawyers Network in 2004, the B. Warren Hart Award for Public Service from the Saint Paul Jaycees in 2001, and the Ten Outstanding Young Minnesotans Award in 2000.
Wright was appointed to the Ramsey County District Court (Minnesota) in 2000 and to the Minnesota Court of Appeals in 2002 by Governor Jesse Ventura, on which she served from September 3, 2002 to September 26, 2012.
Wright was appointed to the Minnesota Supreme Court on August 20, 2012 by Governor Mark Dayton, with her term beginning on September 27, 2012. She is the first African American woman to serve on the court.
On April 15, 2015, President Barack Obama nominated Wright to serve as a United States District Judge of the United States District Court for the District of Minnesota, to the seat vacated by Judge Michael J. Davis, who took senior status effective August 1, 2015. Her nomination was reported by the Senate Judiciary Committee on September 17, 2015, by voice vote On January 19, 2016 the Senate voted 58-36 in favor of confirmation. She received her federal judicial commission on February 18, 2016.

Sherrilyn Ifill is a law professor and president and director-counsel of the NAACP Legal Defense Fund. She is the Legal Defense Fund’s seventh president since Thurgood Marshall founded the organization in 1940. Ifill is also a nationally recognized expert on voting rights and judicial selection. She is the author of On the Courthouse Lawn: Confronting the Legacy of Lynching in the 21st Century. In 2021, Time named her one of the 100 most influential people in the world on its annual Time 100 list.

The Loss of Tutu is Immeasurable