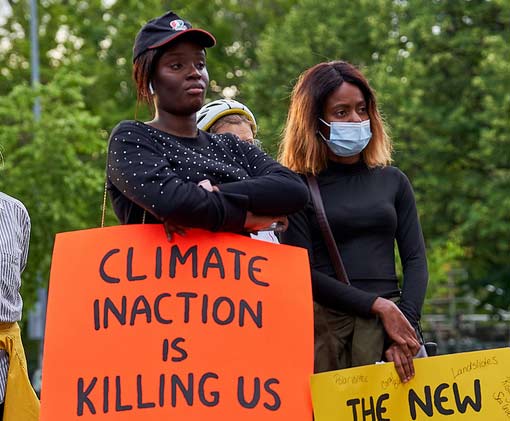 Rachel Cleetus,
Policy Director, Union of
Concerned Scientists
Very soon, President Biden is expected to sign into law a budget reconciliation bill with historic climate provisions. On August 7, the Inflation Reduction Act of 2022 won passage in the Senate along party lines, 51-50, with Vice President Kamala Harris casting the deciding vote. The House is expected to pass the bill within days, and it will then move swiftly to the President’s desk for his signature. After decades of delay and inaction, this is a momentous breakthrough for US federal climate action. It’s a breakthrough many of us have fought for and desperately hoped for, for far too long.

What makes the Inflation Reduction Act historic? Quite simply, the bill puts in place policies and investments that will drive significant cuts in heat-trapping emissions across our economy—the power sector, the transportation sector, buildings, industry, and agriculture. Together with additional EPA pollution standards; additional agency and executive actions; state, local and regional policies; and private sector initiatives, this groundbreaking bill puts the US within striking distance of meeting our climate goal of cutting emissions 50 to 52 percent below 2005 levels by 2030. Provisions of the bill would also create good-paying jobs in the US clean energy manufacturing sector, invest billions of dollars toward environmental justice, reduce air and water pollution in communities across the country, and make farmlands and our food supply more resilient. This is in addition to critical healthcare and tax provisions that are also part of the broader budget reconciliation bill.

We now have fresh reason for hope at a time when dangerous extreme weather—heatwaves, floods, wildfires, drought and more—is exacting a terrible human and economic toll around the world. The world’s biggest contributor to cumulative heat-trapping emissions is finally taking meaningful action to address the rapidly worsening climate crisis. That will also give wind to the sails of global efforts to curtail heat-trapping emissions, with the potential to spur greater ambition from other major emitters. The overall bill is a big win for climate, jobs, and justice. And it gives us a firm basis to fight for more in the months and years to come.

This win did not come easy. Fossil fuel companies and their allies, who have fought progress and spread disinformation for decades, came out in full force against this bill as it wended its way through Congress—and managed to secure some harmful concessions in the final version. Fully half the Senate—the entire Republican caucus—stood on the sidelines even as they had an opportunity to take action to address one of the biggest challenges of our time.

That we are at this incredibly hopeful juncture today is a testament to the vision, leadership, and grit of many. First and foremost, this would not have happened without the large and diverse climate movement—including environmental, justice, labor, youth, faith, and business groups—and its strategic, patient (and sometimes appropriately impatient!), and hard work to join forces and push for the most ambitious legislation possible. While we did not succeed on every front, the scope and ambition in the bill owes everything to the broad coalition that pushed for it.

With this bill’s passage, let’s take a moment to rest, to give thanks, and to recharge ourselves for the long walk ahead.

10 year old Thomas of Jacksonville, Florida can tell an illustrative tale of the complex relationship between our energy infrastructure and the health and wellbeing of black communities. He lives 2 miles from a coal fired power plant. He has severe asthma and has to stay home from school on poor air quality days. When Thomas stays home from school, his parents, who do shift work without paid leave, lose income, while Thomas loses critical ground in his educational advancement.

Grandma Maisie of St. Louis, MO could further elaborate on the complexities. When she was asked about whether she would be in favor of a hike in her electricity bill so that the utility could invest in energy efficiency measures, she responded that she would gladly pay more, if it meant that she didn’t have to take her grandbaby to the emergency room due to his asthma attacks because of pollution from power plants.

These aren’t just one-off examples. Each of these is an illustrative indicator of a widespread pattern of systemic energy injustice:
If we are truly serious about Black Lives Mattering; If we deeply value taking the knee of white supremacy off of the neck of Black America; If we sincerely want to end the inhumane practice of sacrifice zones and the poisoning of entire communities of African Americans, Latino Americans, Indigenous Nations, Low income white American communities, and others with toxins; If we truly want to legislate upholding human rights and preservation of the earth…. We must aim to deconstruct a utility business model that will withhold life-saving heating or cooling or the electricity to power the respirator of an oxygen-dependent sick person all while lining the pockets of the utility baron to the tune of an average of $9.8 million in annual compensation. We must advance a radically transformative transition to a new energy economy.

We must have a system that puts power, literally and figuratively, in the hands of the people. ALL people.