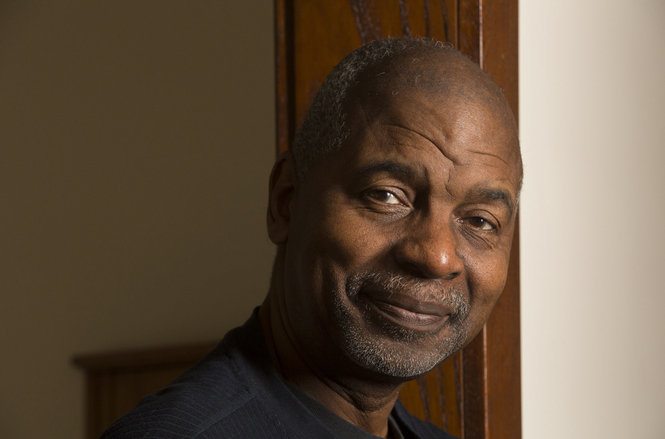 Richard Wesley is a writer for all seasons.

And it took the busy scholar, professor and award-winning playwright about a hundred of them before he found time to write the impressive “Autumn” play currently in production through Sunday, November 6 at LIU’s Kumble Theater in Downtown Brooklyn.

While his skill peaks with this latest drama directed by the acclaimed Walter Davis, Wesley has picked up accolades and a number of stellar awards along the course of his 40-year sojourn in the writing arts, including an Emmy. Currently, Wesley teaches at New York University’s Tisch School of the Arts in the Rita and Burton Goldberg Department of Dramatic Writing.

Wesley’s “Autumn” explores, according to the production press release, the conflicts that arise when “aspirations collide across generational, racial and gender divides marking sharply different political agendas against the needs of the people”.

The story rolls out on a sharp, elegant, minimalist set at a glassed-in office on the top floor of a luxury building overlooking the city. There, a mayor wields hubris and passionately refers to the city as HIS, as in his empire, his kingdom.

The creative design team gives (successfully) the setting of a character: the office appears to double as a boxing ring. The actors weave in and out. It’s also a chessboard. There are pawns, kings, queens, a prince, each melding into the other’s space.  Under Davis’ direction, the solitary desk is used for great purpose, conveying a world where agendas move around each other and characters pose as if sparring is life. Agendas shift. Missions are off-centered as ambition “supersedes service”.

But is Wesley talking about a political scene, per se.

This play’s only relation to what is happening on the national scene with the country gearing up for the “intense presidential election” is in its exploration of the interior voice: what the characters say they want against the echoes of some dark needs.

“Autumn” talks about politics as it relates to gender, class and age – topics at the forefront of a national conversation, but not so close to the issues of survival–the populace is facing, there is something more.

“Autumn” is not about Hillary, Donald, Michelle or Barack. But any one of them could walk into the set and inhabit a role. Wesley leaves space in the ring.

Our Time Press caught up with Wesley and found, as suspected, that the play was beyond the scope of the arena of politics. Reduced to its essence, the play deals with power, its interpretations, the use of it, the passing on of it and, as he told us, “how it should be given up without losing your center”.

“One of the things the play deals with are the responsibilities of each generation to the next, about giving back and leaving behind,” he told us. “One generation’s legacy is supposed to inspire and uplift and serve as a platform for the next generation that comes along. It is about what happens when an older generation fails to do this, has not performed that responsibility to the best of their ability. It is a discussion echoed in Wesley’s last play, “The Mighty Gents”. “But not as strongly,” he says.

“For creative purposes, you keep going on. The thing that keeps those in arts going on is the exploration and exercising of your creative energy. We’re constantly looking for ways to express ourselves. You’re not at the center of things as much as you were as a younger person but you don’t stop writing, you don’t stop painting. Life continues to happen and you use your art as a means to express your reaction to it, whether it is through the theatrical arena, film, television, arenas that have changed tremendously since I began my career more than 30 years ago. But you don’t stop.”

“On the day Picasso died at 96, he was in the studio getting ready to paint. And I thought: that’s what I want to do.”

“I remember Eubie Blake, 99, talking about a composition he had in mind. What kept him going was the excitement of the process of creating. There was a writer named George Abbott that I met. He was in his 90’s when he created his last professional production which he wrote and mounted.

“Age did not interfere with his ability to get it complete, to always think about his craft, to keep it going on.”

This is not the motivation of the main character so brilliantly brought to life by actor Jerome Preston Bates who introduced the character in “Autumn’s” spring 2015 national premiere in New Jersey where Wesley was born.

In this gift, Wesley teaches us how legacies should be harvested by telling a story that depicts the opposite.

(Part II will be presented next week.)