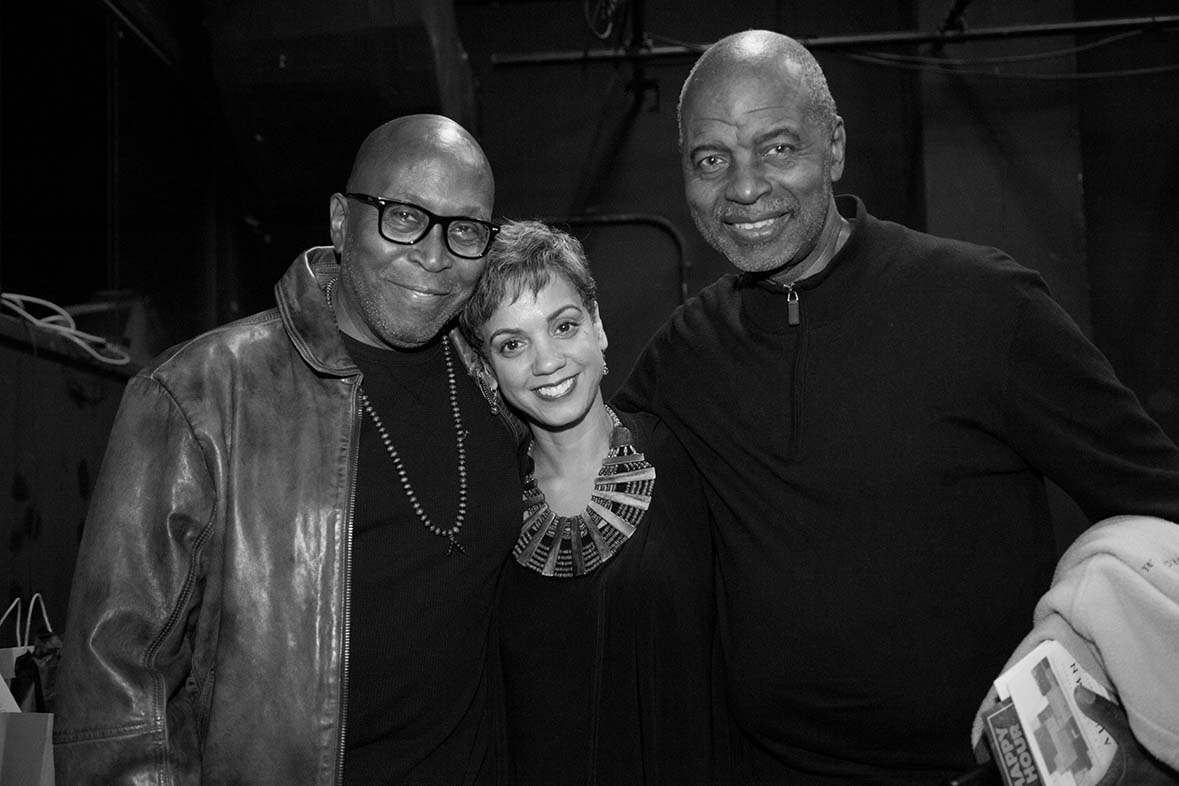 Tickets are moving fast for playwright Richard Wesley’s must-see “Autumn” at the LIU’s Kumble Theatre in Downtown Brooklyn, ongoing through this Sunday, November 6.

Wesley gleans a jewel of a story from the world of politics in this production starring Jerome Preston Bates and directed by Walter Dallas. The play is inspired by experiences and people who have come in and out of Wesley’s life over the years, and play’s not all about politics, he told Our Time Press in a recent interview.

“Autumn” is the story of an ambitious big-city mayor, Franklyn Preston Bates, who is ultimately running up against himself and the winter of his life. Bates came of age during the civil rights struggle and Black power era. He has benefited from gains out of all those confrontations that created the apparatus for Black political power. Now the mayor must confront a new generation with a different worldview. The mayor learns on the eve of his party’s nomination that his party is going to endorse a younger man, his protégé. The play appears to head in one direction, but turns to another, as the mayor confronts the challenge of turning over the reins to another generation.

Here are some excerpts from our recent phone conversation with Mr. Wesley, who teaches writing at NYU and authored such classics as “Uptown Saturday Night”, “Let’s Do It Again”, “The Mighty Gents”, “Mandela and de Klerk,” among others.

On the intergenerational theme of “Autumn”

The play is set in the political arena, but in the theatrical, film and television arenas, there has been tremendous change since the beginning of my career. I’m not at the center of things as was 20 years ago. But I don’t stop writing and commenting on the things around me.

One generation’s legacy is supposed to inspire, uplift and serve as a platform for the next generation that comes along. It’s about what happens when an older generation fails to do this, has failed to perform their responsibility to do the best of its ability. It is about what we give back and what we leave behind. It also is about how you don’t give up (once the reins are handed over), you keep going on.

The line between stage writing and film writing

On his Father and Mother’s influences

My father was a pillar.

My trying to navigate my relations with him is a lifelong thing: I lost him right after I graduated from Howard.

It came at a point where I had these plans as to how we would relate to each other as men. I had this vision of him as my great advisor. My brother Leonard and I talked about how, as he neared retirement, we were going to get a house for him and my mother to pay back to our parents what they had done for us.

I never knew my father to be remotely interested in doing anything artistic, but I remember when he would tap out these intricate rhythms with his fingers. He drummed on surfaces around him, absent-mindedly, but those were intricate, very discernible rhythms. Things you literally could dance to.”

He loved reading, absorbing as much as he could.

Mom spent two years at Teachers college in North Carolina before leaving for New York. She never went back to school.

She read newspaper articles to us, and if she saw a photo that interested us, she would read the caption out loud.

Growing up in the 50s and 60s, out of every four black families, only one was headed by a single other. Now, it’s reversed.

I remember the gatherings with my mom, one of thirteen children. There was constant coming and going. I was surrounded by uncles – all working men, aunts, smoking cigars, laughing, joking, cooking, playing baseball, wrestling, dining … all together. We were just smothered with motherly and grandma’s love. We ran from one set of arms to the next.

Then you go back to the other room with your father and his brothers. My dad and those uncles gave me a sense of what I was supposed to be as a man, how to dress, carry myself, behave around women.

I met Amiri when I was 19. I didn’t know he was from Newark, til we were doing the production of the Dutchman at Howard.

I would not see him until another three or four years when I graduated in 67. We made contact through Ed Bullins, I took a writing workshop with him and we remained friends until his death.

Following Amiri’s development as a political figure and followin the political rise of black politicians in Newark and across the country filtered through my relationship with him. And seeing it all up close, a lot of it did rub off in terms of how I wanted to approach the “Autumn” play.

Whatever city it is going to be in, there will always be someone remarking about some political figure they know: in D.C., someone will see Mayor Barry. In New York, David Dinkins. In Cleveland, Carl Stokes.

Roots of Inspiration: The Obamas and Black Love

The play was influenced by all of those individuals, and all the things that have happened with black politicians and me coming to understand how politics works in big cities.

When historians look back on this current period, they will see the seismic change in the United States with the election of Obama. How he changed what is possible in this country. During my time, anyone who was Anglo, protestant, white and male could grow up to be President. The exception was Kennedy.

Obama is a complete manifestation of the expression, “you can be president of the United States.”

Barack and Michelle also have given affirmation to the validity of black love. They have shown that love and family, central traditions, partnerships, do exist and they are valuable to us, and viable in the black community as opposed to that elevation of pathology that Donald Trump is engaging in.

The Obamas give lie to American myths about people of color.

They give affirmation of something else that we all have deep, deep down inside, and so many of us have born witness to.

The appearance of Michelle Obama means a great deal to black women cross the spectrum of the black community across the community.

She is dark skinned with African features. He chose her, he married her, and built a family with her.

And that has meant a lot.

My wife, Valerie, said that’s what got Baraka over. Michelle has come on to be the definitive First Lady of the 21st century. She is the most profound First Lady since Eleanor Roosevelt.   She has set a bar that every first lady is expected to meet.

In “Autumn” love is talked about tangentially. It’s going to have to show up in the play that follows this one.

Brooklyn is my favorite borough in all of New York City. When my wife and I decided to we were going to be a couple, this is where we lived.

In the early 1970’s, I used to take the A train to Nostrand Avenue stop and walk south across Atlantic Avenue to see my sister. It was the time of some political greats, and Brooklyn was the center of Black politics with Shirley Chisholm, Major Owens, Al Vann beginning his political career.

I used to go to The Slave Theatre on Fulton Street to see cultural events.

Two of my plays, “Gone through Changes” and “The Past is the Past” were mounted at The Billie Holiday Theatre back in the 70’s.

Brooklyn’s in my consciousness forever …

It is a period of transition, part of the process of renewing. It’s also a period for reflection, and getting ready for what is to come next.

Advertisement
Related Topics:AutumnRichard Wesley
Up Next