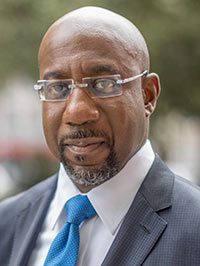 AMERICA 2021
The good 2021 news is that Georgia’s US Senate candidate Democrat Rev. Raphael Warnock looks like the winner of January 5 runoff against GOP Senate incumbent Kathy Loeffler, with 98% of the votes tallied and a Warnock lead of more than 47,000, on early Wednesday morning. Rev. Raphael Warnock becomes the first Black US Senator from Georgia in US history. Black voters, urban and rural, turned out in large numbers and informed the Warnock victory. According to the Center for Responsible Politics, more than $831 million was spent for the Georgia runoff contestants Warnock, Ossoff, Perdue and Loeffler.

Trump’s final days as President is a national tragedy and travesty. America has been beset by two plagues, COVID19 and the Trump Presidency. While the COVID19 pandemic decimates almost every American state’s health systems, the oblivious Trump told Georgians on January 4, that he will fight like hell to hold on to power, beyond January 20, when Joe Biden becomes the 46th USA President. The Army Corps of Engineers is in California providing support and oxygen to state’s overburdened health system, without any executive branch instigation. Does the Trump know that he can help distressed states with a muscular FEMA response. We look forward to January 20 as does African American Fani Willis, newly elected Fulton County, Georgia, who is ready to initiate a lawsuit against Trump for allegedly attempting to manipulate the state’s presidential election results, via his phone talk with Georgia’s Secretary of State Brad Raffensperger, if the case is referred to her. I always thought that NY Attorney General Tish James would be the prosecutor to deal with Trump’s illegal deeds.

CONGRESS: The New York delegation has some more color, which includes three new, younger Black male faces, including Ritchie Torres, 32, former NYC Councilman representing the Bronx; Jamaal Bowman,44, former school principal. who represents parts of the Bronx and Westchester ; and Harvard-educated Attorney Mondaire Jones, 33. They are all avowed Democratic progressives. Torres and Jones will be the first openly gay Black men in Congress.

NEW YORK, NY
NYC Businesses should note that the Paycheck Protection Program, PPP, is back and endowed with $284 billion in forgivable business loans through the federal government’s Small Business Administration, that will help keep businesses, impacted by COVID, afloat. Call the NYC Small Business Services for guidance and for application preparation.
NYC residents interested in volunteerism should consider Community Board Membership. Check with your local Boro President’s office for application information. Deadline is February 1.
Depending upon who is counting, there are about 30 candidates for NYC Mayoral race. I just learned yesterday about African American lawyer, Isaac Wright, a mayoral hopeful ,who gets sporadic media attention, at sites like Grio.com. Wright was wrongly convicted of a drug crime and was imprisoned for life in 1991. In prison, he worked as a paralegal who helped overturn convictions for many fellow inmates, before proving his own innocence. His post prison life included college and law school before passing the NJ bar. The ABC Show FOR LIFE, draws its inspiration from his life.
He sounds as competent as many of their other NY candidates. Perhaps, an interview is in order.

NEW YORK UPDATES
NYC: African American philanthropists Byron and Sylvia Lewis will host a virtual fundraiser on January 8, 7:30 pm to 8:30 pm, for community activist and public relations pro Tiffany Winbush, who is running for the NYC Council, District 1 in Lower Manhattan’s Financial District. A member of Community Board 1, Winbush advocates for women’s and girls empowerment, an adjunct professor of marketing, who blogs at womenmakingmoves.com. Visit tiffanyfornyc.com.

BUSINESS MATTERS
Former NBA player turned Midas Touch Black entrepreneur Ulysses Junior Bridgeman, 67, paid $14 million to pull Ebony/Jet Magazines out of bankruptcy and plans to revive it digitally. It is a noble gesture! His three children, all MBAs will oversee the Ebony republication. Bridgeman , played with the Milwaukee Bucks for 10 years and with the LA Clippers for two years until 1985, when he retired, earning $350,000 annually. After the NBA, Bridgeman turned his attention to acquisition of restaurant franchises. He owned 160 Wendy’s which grossed $530 million annually and 160 Chili’s which generated $300 million annually under the banner of his Bridgeman Foods, which he sold. His guestimated net worth in 2018 was $600 million.
African American April Ryan, veteran AURN (American Urban Radio Network) White House correspondent and CNN Political Analyst , joins media mogul Byron Allen’s new television venture THEGRIO.TV, a 24/7 Broadcast Televison Network , set for a January 15 debut, coincidental with the Dr. MLK Holiday weekend. Ryan will be the Grio.TV’s White House correspondent and D.C. Bureau Chief. POTUS Joe Biden will be 5th American President that Ryan covers.

Greek-Nigerian Giannis Antetokounmpo, 26, an exceptional National Basketball Association player with the Milwaukee Bucks just signed the biggest deal in League’s history, a 5-year renewal contract in the amount of $228.2 million. Giannis was born in Athens, Greece to Nigerian parents, where he honed his basketball skills. He is 6’11” short and was named MVP for the second year in a row as well as the defensive player of the year, joining ranks with two other cagers, Michael Jordan and Hakeem Olajuwon, recipients of both awards in the same season.

JANUARY NOTES
Invest Caribbean and Caribbean American Action Network (CAAN), a consortium of Caribbean American and Caribbean organizations, will present a live, virtual inauguration party themed “Celebrating #Caribbean American Kamala Harris” to mark the inauguration of the first female Caribbean American Vice President of the United States. Party will be held on January 17 at 7 pm EST and will be streamed on the Facebook, Twitter and YouTube platforms of One Caribbean Television (OCTV) and on Radio 102.9 FM in Antigua-Barbuda. Party host, Trina Parks, the first Black woman in a James Bond film will introduce VIP Speakers to include US Reps, Caribbean diplomats and Felicia Persaud event curator and Invest Caribbean founder/CEO; and an impressive roster of Caribbean performers like Flourgon, Fab Five Band of Jamaica, Guyanese Menes De Griot and Shanto! VP Kamala Harris is expected to deliver a message to the Caribbean Diaspora. The Party will rebroadcast on OCTV across the Caribbean on 1/20 , the US Inauguration Day,