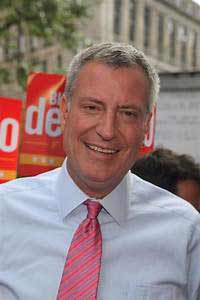 Gun violence is the new virus running rampant through the streets of NYC, specifically in East New York, Brooklyn; Mott Haven, the Bronx; Jamaica, Queens; and East Harlem, Manhattan. There were 125 shootings during the first three weeks in June. From mid May to June 15, there were 38 gun- related fatalities. Memorial Day weekend usually signals the onset of gun violence in the Apple.

There was a flareup between some of the 500 Harlem block party revelers and NYPD, along the Adam Clayton Powell Boulevard corridor, between 131 and 133 Streets. Problems began at 3:45 am on June 28, when gun fire was heard and calls were made to 911. The Police arrived and then chaos ensues as the crowd grew hostile, hurling insults and bottles at NYPD, according to Daily News, NY Post and WCBS TV reports. Fortunately there were no close encounters between NYPD and inebriated partygoers. Arrests were made days later and NYPD has lots of video footage. Would like an official story from a local politico.

Mayor Bill de Blasio is under siege. He is unpopular with New York residents, the business community, NYPD, et. al because of his mismanagement of protesters and his flip flops during the height of the NY leg of George Floyd marches/group venting crisis. A new social equality movement landed and he didn’t know how to accommodate it. He has a large budget deficit owing to city’s COVID crisis and will be forced to layoff civil servants and cut back allocations to programs which benefit city’s marginalized residents. George Floyd protesters have taken up residency at City Hall where they vowed to remain until he presents a new budget reflecting a $1 billion cut to NYPD. On 7/1, the NYC Council passed an $88.1 billion budget, which includes $1 billion cut to NYPD.

COVID19/RE-OPENINGS
Globally, coronavirus infections exceeded 10 million with surges in regions on many continents. The virus death toll approaches 500,000. Most nations have contained the virus sorta/kinda and are ready to resume international travel next month. The European Union is ready for international business travel with a few exceptions. It will ban to airport arrivals from nations such as the United States, Russia, and Brazil. Why? Because of the COVID19 surge in those regions. US airlines like American, United and Delta plan to fly the friendly skies this month.

In the USA, where there is not uniform public health policy, more than 22 states including Texas, Florida and Arizona, have uncontrollable coronavirus surges, the result of May re-openings and a failure to observe virus precaution protocols. Moreover, a Godzilla dust cloud, which originated in the Sahara Desert, hovers over the US gulf states, which complicates virus disorders for those with heart and respiratory conditions. NYC, the erstwhile global coronavirus hotspot has the virus in remission and did so incrementally listening to cautionary tales by scientists, employing the quarantine, face masks, and social distancing when hospitalization was not an option. Looking at surges elsewhere in the USA, NY and NJ are pausing some reopening schedules like interior restaurant dining. Better to err on the side of caution!

LAND USE/JOBS
The NY Post story “JP Morgan Drops foreclosure against James Been, 100 year old WWII veteran who fought fascism,” restores faith in banking. Chase was ready to evict Been over a disputed unpaid $100, 000 loan against his BedStuy home, which originated in 2006. Been says that he never took out a loan and his signature was forged. A NY Post story about his plight attracted donors, advocates and righteous indignation. Last week, Chase dropped the case and forgave the loan. Wonder how many seniors are vulnerable by fraud.

On 6/30, the US Senate voted to extend a small business relief initiative, the Paycheck Protection Program, PPP, for five weeks. PPP still has $130 billion available for loans to small business. Look forward to another round of US economic stimulus which has to address financial aid to states and cities and to rent arrears another national epidemic, a result of COVID lockdowns and job loss. Another $1250 check for individuals should be factored into a new stimulus. Last week, Trump mumbled something akin to a stimulus.

JULY EVENTS
The Macy’s Fourth of July fireworks began on June 29 which will include 6 mini shows through July 4.

BROOKLYN: The 49th International African Arts Festival, one of the nation’s longest running cultural events with Pan African roots, will be livestreamed this year via www.IAAFestival.org. on Saturday, July 4 and July 11. Vendors, live music, dance classes, family activities are part of the interactive festivities. For more info email info@iaafestival.org or call 718.638.6700.

A Harlem-based branding and media consultant, Victoria can be reached at Victoria.horsford@gmail.com