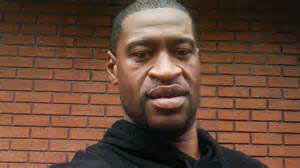 RIP: African American, George Floyd, 46, a truck driver and security guard, died in Minneapolis, Minnesota on Monday, May 25, while in police custody. Like most Americans last week, he was unemployed, emerging from COVID-19’s harsh lockdowns. The story about him passing a counterfeit $20 bill at a store triggered his close encounter with four policemen. Four police surrounded the 6’6” Floyd, handcuffed him, and eventually tossed him to the ground in prone position, while officer Derek Chauvin pressed his knee into detainee’s neck for 8 minutes 46 seconds while two others pressed on his back, as Floyd repeated, “I can’t breathe,” in full view of passsersby, one of whom recorded the assault on her cellphone. On May 26, she posted her video to social media. It went viral. The official autopsy ruled out strangulation stating that death was caused by underlying causes and meth consumption. The four cops were fired, but were not charged with any crime.

Peaceful protests were organized in Minneapolis after the homicide, but they soon spiraled out of control (torching police stations) and spread like a contagion across the nation, from Oakland to NY. American streets were lined with angry people and yet another Black man killed by police. On May 29, Chauvin was charged and arrested for third-degree murder and could face up to 25 years, if convicted. It was partial appeasement. How long did it take NYPD and Mayor de Blasio to fire white cop Daniel Panteleo for the chokehold death of African America Eric Garner? 5 years.
By 6/1, the family received results from a private autopsy that it ordered, which stated that the cause of George’s death was homicide, the result of asphyxia due to neck and back compression. It is time to charge the other cops at the crime scene. With homicide, the charges should be upgraded. The Minnesota Attorney General Keith Ellison, an African-American, will oversee the Floyd homicide proceedings.
Since May 26, the nation has been a cauldron of resentment and anger coincidental with the spirit that we are all in this together as the rainbow nation that must be exemplary for the world to emulate. Most were oblivious to violating the COVID-19 order to social distance ourselves while protesting. George Floyd’s death was a teachable moment for America. NY has a longer curfew now and hopefully the night looting in the Bronx, Soho, Brooklyn and Macy’s is behind us. Most Americans were united in our disgust with the militarized American police culture. We are much better than that. We do not want Trump to send in military troops to manage domestic disorder. His time should be spent checking the spread of COVID-19 in red states instead of messaging about the inefficacy of Democratic blue state governors and managers.
America needs strong leadership and a commitment to healing. Yes, African Americans, Latinos, European Americans, and Asian Americans must work for a common cause, the preservations of our democracy. CEOs of major American corporations must come to the table for a new more socially-engaged society. COVID-19 should be our only war we are battling as we search for a vaccine.
FYI: The Floyd Family established a GOFUNDME Memorial Fund to defray costs for funeral, lawyers and has raked in more than $7 million from 250,000 people.
NEW YORK: You are invited to attend a Unity In The Community Discussion with NY Police Department and Inez Dickens, NYS Assembly member from Central Harlem, on Thursday, June 4 at 6:30 pm, for a “Where Do We Go From Here” webinar to examine George Floyd’s tragic death and how to move forward responsibly. In order to participate, you must register by forwarding your contact info and all relevant questions to Inez.dickens70@gmail.com, which will respond with WebEx webinar access code.


NYS Governor Cuomo, displeased with the Mayor Bill de Blasio and NYPD response and mismanagement of the more violent expressions of the late George Floyd protesters and widespread looting and property destruction in Manhattan, Brooklyn and the Bronx on Monday, warned that he could remove Hizzoner and replace him with NYC Public Advocate Jumaane Williams, who is next in the line of succession. The NYC 8 pm curfew is extended through week’s end.

COVID-19/ECONOMICS
TENANT INFO: The NYS Legislature passed the Emergency Rent Relief Act of 2020, a short-term, interim rent relief program for low-income residents with rent arrears, impacted by COVID-19, funded up to $100 million, which is allocated from the coronavirus relief fund to NYS from Federal CARES Act.
BUSINESS INFO: Entertainment mogul Sean “Diddy” Combs launched OUR FAIR SHARE initiative last week, a new platform to help minority-owned small businesses to access Second Round (PPP) Paycheck Protection Program, which is a part of the Coronavirus Aid Relief and Economic Security CARES Act, the $2 trillion stimulus act that Congress approved on 3/27. Visit ourfairshare.com to see if you qualify.

JUNE STUFF
The month of June is month of special events, such as K-12 and college graduations, weddings and Junetteenth celebrations. June is also Black Music Month, Caribbean American Heritage Month, and Gay Pride Month, LGBTQ, all of which will be covered in WGO. ~~~
A Harlem-based branding and strategic management consultant, Victoria can be reached at Victoria.horsford@gmail.com