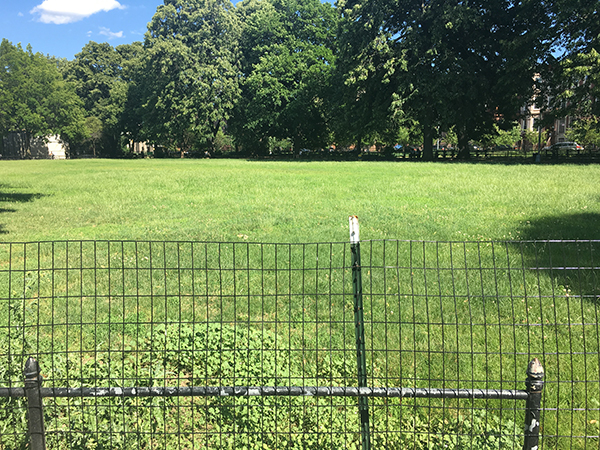 For the second year in a row, the city’s Parks Department is saying they will begin renovations on the shuttered Von King Park Community Center, 670 Lafayette Avenue, this fall, and local activists are biting their lips over it.

The center, which for years had extensive programming for young students to seniors serving Bedford-Stuyvesant, was closed in April 2015 with the promise of renovations would be started in the fall of that year. Von King Park is bounded by Marcy, Lafayette, Tompkins and Greene Avenues.

“For some reason they (Parks Department) keep pushing it back. Money has been allocated since the previous Council person (Al Vann), and the work just hasn’t been done. It’s really sad. The summer stage will be happening in the outdoor part, but the building isn’t available to the public. The whole entire building has been closed since last year,” said Wayne Devonish, executive director of the Von King Park Conservancy.

At the time of its closure last spring, the Parks Department told Our Time Press that the 18-month project would commence in the fall with the following statement:

“The facilities being renovated at this beloved neighborhood cultural center include the Eubie Blake Auditorium. This multipurpose room will be reconstructed with new wheelchair lifts, new seating, new stage, a new light and sound booth, and new equipment. New sprinklers will be installed on the lower level. Dressing rooms will be re-assigned as electrical & pump rooms and ceramic firing kilns will be relocated. All new features will be designed to provide accessibility, meeting established Americans with Disabilities Act (ADA) design standards.”

Reached yesterday, a Parks Department spokesperson e-mailed the exact same statement, but added, “The project is funded with $4.7M from Council member Robert Cornegy and Mayor de Blasio, and pending a successful bidding process, construction is expected to begin in the fall”.

Cornegy spokesperson Sefani Zinerman responded that money given by both Vann and Cornegy wasn’t enough to complete the entire project so the Parks Department decided to wait until the entire sum was allocated. This office does expect the project to be put out to bid this year, she said.

Community Board 3 District Manager Henry Butler referred all questions on the project to CB3 Chair Tremaine Wright, who did not get back to this publication at press time. Wright is also running for the open 55th Assembly seat left vacant with the announced retirement of Annette Robinson.

Her opponent in the race, Karen Cherry, said the work or lack thereof, appears to stem from one of two things – either the money from Cornegy was never allocated or his office is not properly overseeing how the funding is being used.

“It’s sad with what’s going on, especially when the programs in the community center were well-utilized, and now for it not being funded for the second summer there needs to be someone looking at what’s going on,” said Cherry.

Meanwhile, Devonish said the conservancy has gotten Parks to put in new sod and park benches and they are partnering with the Bed-Stuy Y in doing some outdoor programming such as an upcoming one-day boot camp. The conservancy also has advisory board members that work with Central Park and Prospect Park to help with the overall upkeep and progress of the park as an urban oasis, he said.

But not having the community center, which includes a full kitchen, study space, historical murals, a computer lab and other amenities, continues to impede on the park’s progress.

“I feel everybody should be up in arms about this, but I’m a park guy. We definitely could use some voices and some muscles to get things moving because it’s been sometime,” he said.

Movement Toward Justice in the Case of Chanel Petro-Nixon