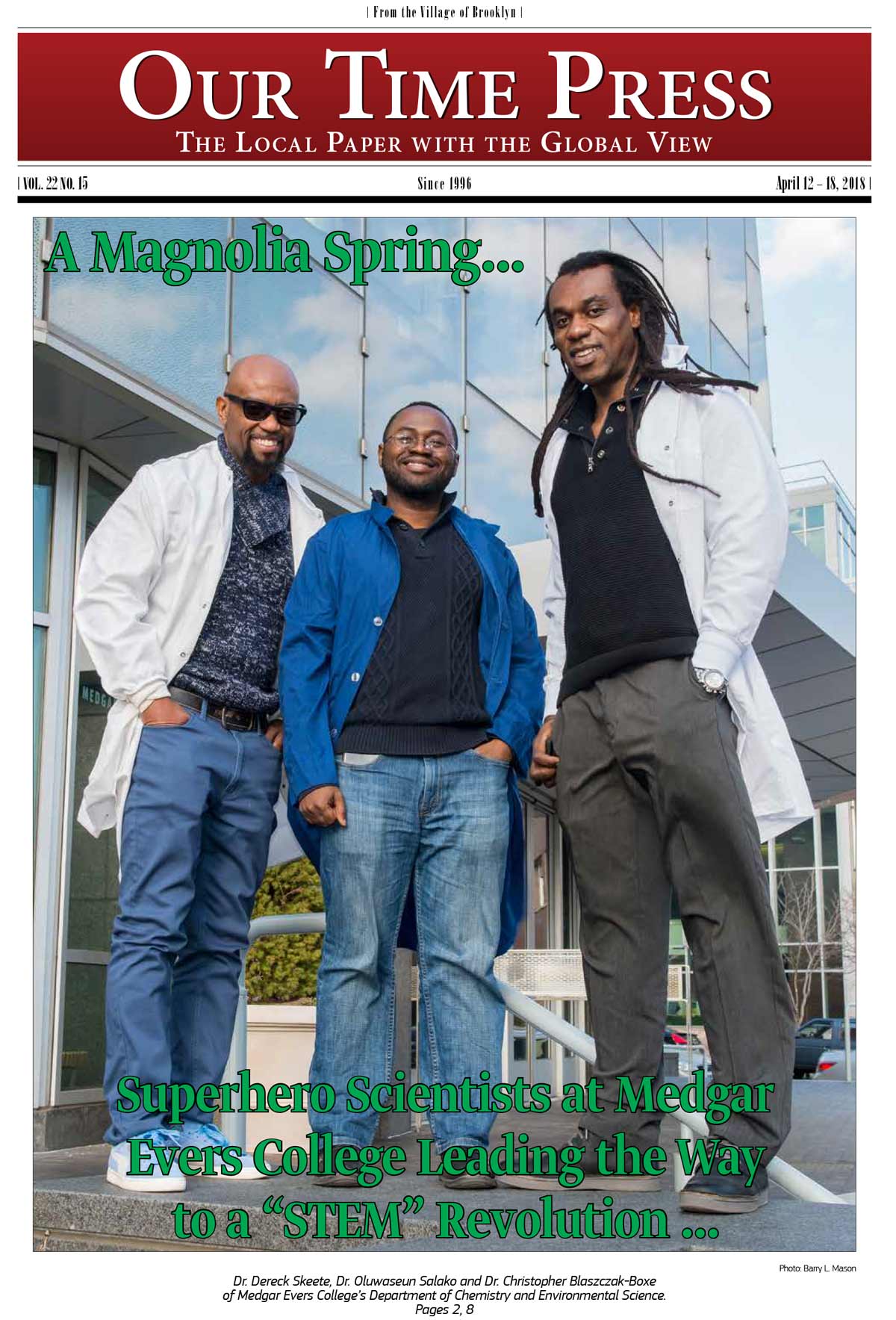 This Our Time Press April 12, 2018 cover was one of the most popular in the paper’s history. Photographed by Barry L. Mason in observance of April Earth Month, the featured subjects were, from left, Dr. Dereck Skeete, Dr. Oluwaseun Salako and Dr. Christopher Blaszczak-Boxe, scientists and science instructors affiliated with Medgar Evers College’s Department of Chemistry and Environmental Science. We wrote that they were leaders in a movement to help the next “generations understand and appreciate the sciences and technology -- the new wave of the future.” Those scientists visited the schools; talked to the students, their teachers and their families; and made history. For hundreds in District 16, it was the first time they had ever experienced a close encounter with a “real scientist”. (BG)

Dr. Christopher Blaszczak, originator of Our Time Press’ recurring STEM NEWS columns, pre-pandemic, returns to this paper as a columnist in an exclusive new series of timely, thoughtful Q&A interviews, reports and essays. OTP publisher David Mark Greaves announced to his staff this week, “Dr. Boxe brings with him a love for our Brooklyn community; for teaching, and dispensing information of substance to all ages, as well as a wealth of knowledge on such timely subjects as climate change, global warming, new developments in space and more.”
In 2018-2019, as the anchor of the Project Green community service programs, Dr. Boxe participated in numerous activities, including tree plantings, talks, workshops for District 16 students, parent coordinators, and principals. He also was the first scientist hundreds of children ever met. At MS 267’s June 2019 commencement, the former NASA scientist accepted the school’s invitation to deliver the keynote address. A transcript of the speech, designed to encourage students to understand the “purpose” of education, is below. Dr. Boxe’s First Thursday column launches next week, October 8.

Dr. Christopher Blaszczak-Boxe
Thank you all for allotting me the opportunity to speak on behalf of the graduating class of 2019 – specifically, special thanks to the class of 2019, respective parents and extended family and friends, Felicia Allen (along with MS 267’s Graduation Team), Shashana Gooding (Parent Coordinator at MS 267), respective MS 267 staff/teachers, greetings to Dr. Evelyn Castro (Dean of Medgar Evers College’s School of Professional and Community Development), and Dr. Patricia King (Principal at MS 267).

Today, I invite you to accompany me on a short journey to unlocking God’s gift – your true genetic intellectual potential through education. With that being said, what is education’s true meaning and purpose? As exemplified by Dr. Martin Luther King, Jr.’s eloquent writing: “The Purpose of Education,” while he was an undergraduate student at Morehouse College in 1948.

Given that the true goal of education is equated to – not only high intellect but also the quality character and thus a moral compass – how can you – graduating class of 2019, unlock God’s pre-written gift? I envision that – YOU – will be amongst future conversations that challenge the status quo. According to NSF’s National Center for Science and Engineering Statistics (2018), all minority races earn approximately 10% or less of all conferred BS, MS, and Ph.D. degrees, while Whites earn 54% to 61% of those degrees. This same year, out of 69,115 STEM Doctoral degrees conferred, Blacks earned 1855 (2.6%), Latin Hispanics earned 2019 (2.9%), Asians/Pacific Islanders 4146 (6%), and American Indians/Alaskan Natives) earned 137 (0.19%) of PhDs, compared to Whites, who earned 30411 (44%). Black men and women and Hispanic men and women comprise 2% to 4% of scientists and engineers working in science and engineering occupations. This graduating class of 2019 is the status quo.

In personifying the true goal of education, one has to challenge the status quo and embark on paths never trekked before. I envision – YOU – will embrace this inevitable quest and will claim a plethora of victories through your discoveries. I envision the future wrought with bright minds (like yourself) having discussions of God’s omnipresence, omniscience, and omnipotence – thus, challenging many of life’s status quos. I foresee mathematical physics discussions and discoveries based on the infinite nature of the universe as the 1st Law of Thermodynamics and uncertainties in remotes sensing measurements (which gives only a glimpse into what has been deemed a fraction of a finite universe) are in clear contradiction to the existence of the finite universe, Bing-Bang theory, the ever-expanding universe. YOU – will be a part of the future discoveries of older signs of life – that extend beyond fossilized microorganisms found in hydrothermal vent precipitates in Quebec, Canada – dating beyond 4.28 Billion years ago – and even 3.7 Billion-year-old stromatolites discovered in Western Australia. YOU – will be at the table to finally settle why Pluto was formally reclassified from a planet to a brown dwarf – and what exactly is a brown dwarf. YOU – will be a part of the most economically-favorable futures market – that is, BIG DATA, because data is everywhere and anywhere and can be harnessed to God’s bidding.

Trusting and unlocking God’s gift – the fundamental physical and functional unit of heredity, which carries information from one generation to the next – one’s genes – through education is the inherent journey God has for you. This will allow you to embrace the true goal of education: high intellect and character.

Looking back at my educational journey, I often reflect on Morehouse’s impact on what I became over the years. At Morehouse, students were immersed in an environment that optimized our chances for future success; all our contemporaries shared this environment. Morehouse was able to find young men, challenge them to succeed, and give us the support we might need to overcome the obstacles we would face. We were also imbued with a desire to help others to succeed by using our maturity and experience to mentor those coming behind us.

Fiction is God’s way of embarking on the unknown path – that path never traveled before – that path – that can metamorphose one’s thoughts into reality. Congratulations to YOU – the class of 2019 – stay lit and deadass throughout your educational journey. Be bold! Have no fear! Angels are amongst you as you become your most skilled!
Dr. Boxe’s extensive Curricula Vitae can be found at the websites: www.ourtimepress.com and www.christopherandassociates.net.

Advertisement
Related Topics:Christopher Blaszczak
Up Next