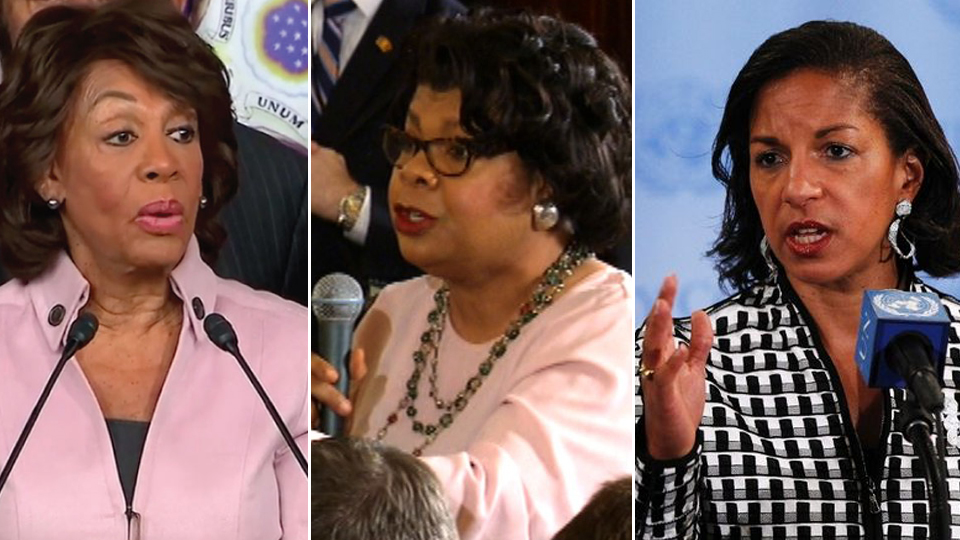 Michelle Obama has spoken candidly about her experience as the nation’s first African-American First Lady, including the racist and sexist insults hurled at her by Republican politicians and pundits.

During her 2015 commencement address at Tuskegee University in Alabama she said:

“Over the years, folks have used plenty of interesting words to describe me. One said I exhibited ‘a little bit of uppity-ism.’ Another noted that I was one of my husband’s ‘cronies of color.’ Cable news once (charmingly) referred to me as ‘Obama’s baby mama.’”

Last week, Rep. Sheila Jackson Lee (D-Texas) suggested that the racist scrutiny the former First Lady was subjected to (during which time Obama nonetheless remained determined to live out loud so that people could see her authentic self) is publicly reemerging.

Five U.S. intelligence officials have said that Rice followed standard procedure in requesting the National Security Agency to reveal to her the names of American citizens who had been in contact with Russians whose communications were monitored by U.S. intelligence, according to Reuters.

The officials said it is unlikely she would have known that any unidentified American had a connection to President Donald Trump.

In an interview with NBC’s Andrea Mitchell on April 4, Rice said the allegations made against her are false.

But Trump and his allies have focused on unsubstantiated reports that Rice disclosed the names of Trump aides swept up in U.S. surveillance of foreign targets. Republican Sen. Tom Cotton has referred to Rice as “the Typhoid Mary of the Obama Administration.”

The president said on Wednesday he thinks Rice committed a crime, but he declined requests for evidence, The New York Times reported.

He also declined to say in the interview whether he had reviewed intelligence to bolster his claim about Rice but said he would explain himself “at the right time.”

The day before President Trump stated his claim against Rice, Donald Trump, Jr. tweeted that Mike Cernovich, who runs the alt-Right website DangerandPlay.com, deserves a Pulitzer Prize for a blog post he wrote accusing Rice of unethical practices.

Cernovich, who refers to himself as a “lawyer, author, free speech activist and documentary filmmaker,” has a history of racist and sexist tweets. He once tweeted advice on how to “slut-shame” Black women.

According to CNN, he said in February 2016 in a now-deleted tweet:

“Not being a slut is the only proven way to avoid AIDS. If you love Black women, slut-shame them.”

Cernovich’s articles, which “60 Minutes” called “fake,” have been promoted on Twitter by retired Army Lt. Gen. Michael Flynn, who resigned in February as the president’s national security adviser.

During the same New York Times interview in which Trump made accusations against Rice, he also came to the defense of Fox News’ Bill O’Reilly.

“I don’t think Bill did anything wrong,” Trump stated in regard to the revelation that the TV host, Fox News, and its parent company, 21st Century Fox, paid $13 million to settle claims he sexually harassed them.

The week prior to the Fox News scandal, O’Reilly made a sexist and racist comment against Waters. A veteran politician, Waters was elected to her 13th term in the U.S. House of Representatives in November 2014 and serves as a ranking member of the House Committee on Financial Services.

While watching footage on “Fox & Friends” of Waters giving her speech on the House floor, O’Reilly mocked her by raising his fist and mouthing the words, “Right on.”

And when asked his opinion of the congresswoman’s comments, O’Reilly replied: “I didn’t hear a word she said. I was looking at the James Brown wig.”

The Fox News host’s comment about Rep. Maxine Waters is “no laughing matter,” rather “a well-worn diversion and act of denigration,” a Rutgers women’s and gender studies professor told DiversityInc.

Nikol G. Alexander-Floyd, an associate professor of women’s and gender studies at Rutgers University-New Brunswick, told Diversity Inc, “For people like O’Reilly, a Black congresswoman is read as threatening and counter to his very being.”

The same day Waters was insulted, during a news conference White House Press Secretary Sean Spicer accused April Ryan, a correspondent for American Urban Radio Networks, of having a biased agenda. He told her at one point to “stop shaking your head” as he was answering her question.

As a result of Waters and Ryan’s shared experiences, the hashtag #BlackWomenAtWork began trending on Twitter. Black women used the hashtag to share experiences of racial discrimination while at the workplace.

Waters tweeted: I am a strong Black woman. I cannot be intimidated, and I’m not going anywhere.

In an interview with conservative radio host Hugh Hewitt, Spicer defended his actions toward Ryan.

“To suggest that somehow because of her gender or her race she’d be treated differently, I think is frankly demeaning to her,” he said.

“She’s a tough woman that fights every day to get out there for her publication and her audience to get the questions that she wants answered and I respect that. I really do.”

In an interview with CNN, Ryan responded to Spicer’s remarks: “Well, I thank him for saying I’m tough, but I still bleed and I hurt too at the same time,” she said.

Ryan, who recently became a CNN political analyst, also noted that, “We all are in there together in this mosh pit trying to ask questions. But you have to remember, this is a male-dominated town.”