To Kneel on Sacred Ground …
Advertisement 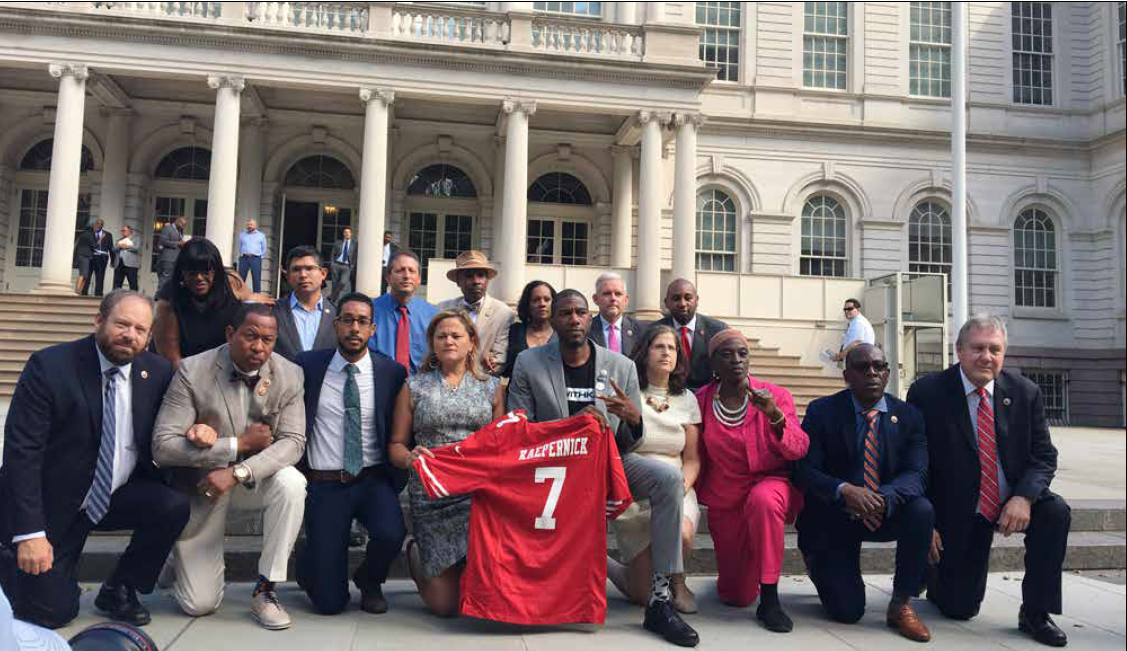 Yesterday, fellow members of the New York City Council joined Jumaane Williams, 45th District, gathered in front of City Hall just across from the statue of Nathan Hale to “take a knee” in a show of solidarity with the purpose of denouncing racism, injustice and upholding the American right of freedom of speech.

Congresswoman Barbara Lee did the same, on Monday, on the Congressional floor and across the nation, others are doing the same.

In 2016, Colin Kaepernick, former quarterback for the San Francisco 49ers, began the silent protest of kneeling on the sidelines during the national anthem because of what he called the oppression of people of color in the United States — particularly the police shootings of many young, African-American men in the last few years.

He was met with resistance.

And on August 19, at the foot of the Brooklyn Bridge, NYPD officers took a knee at Pier I in solidarity with the fired player’s real concern: the injustices that prevail and that are clearly denoted in the anthem, itself.

Last Friday night (September 22) at a political rally in Alabama, Trump attempted to steer the conversation away from Mr. Kaepernick’s intent.  He announced that NFL players should be fired for kneeling during the playing of the national anthem.  He also said, in a reference to Mr. Kaepernick: “Get that son of a b____ of the field.” And he did this while a humanitarian crisis is happening in Puerto Rico, and the U.S. Virgin Islands.

“Protesting is probably the most American thing that one can do,” Councilman Williams, said at the press conference yesterday. “Everything we enjoy in this country is because of protesting.”

And the country is coming around; the conversation is on track, and good percent of the nation is taking a stance, by taking a knee for the constitutional rights of all Americans to protest and to speak out against racism.

But there was something more poignant about yesterday’s demonstration, it was a reminder that all of this was happening on sacred ground.  Historians have determined that City Hall is just a few feet south of the Colonial-era  ‘Negros Burial Ground’ considered the largest colonial-era cemetery for enslaved African people and ‘possibly the largest and earliest collection of American colonial remains of any ethnic group.’

These enslaved Africans – many young children worked unpaid, without health benefits of any sort, and who cleared the trees and made the pathway for the construction of Wall Street and all of the other buildings, including City Hall, living only to work.  It is estimated that from the mid-17th century to 1795, nearly 200,000 had been worked to death and were buried there.

A portion of the cemetery discovered in 1991 during an excavation along the short Elk Street – now African Burial Ground Way, was designated a National Historic Landmark by the Department of the Interior in 1993. A memorial was dedicated in 2007.  The tenth anniversary celebrations take place at the memorial site, now a Federal Landmark, next week.

By taking a knee and the inclusive comments they made at City Hall Wednesday, councilmembers showed support for the continuing struggle of Africans in the Americas, as well as for their storm ravaged brothers and sisters in Puerto Rico, Mexico, and the Caribbean.