Thinker’s Notebook: While I’m under the Weather  Brothers are getting together
Advertisement 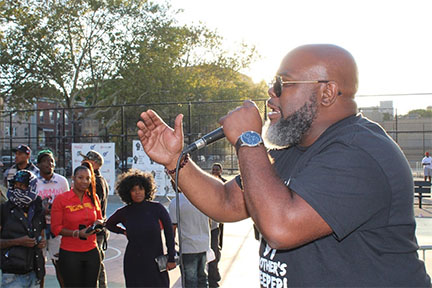 I thought it was the flu. Then I thought it was a chest cold and a back strain. It turned out to be allergies and a tight back. And while everyone was outside enjoying the Indian summer, this columnist was in his bed, my 2-year-old watching Elena of “Avalor” on my phone while I tried to catch up on “Mr. Robot”. Good show. Check it out.

I missed out on a lot this past Sunday. At the Producers Club on W. 44th Street, filmmaker Saquan Jones was screening his newest work, And There Were Four. I’m in the movie. I play the fake Frederick Douglass. Long story.

I missed another special event this past Sunday. My friend Barry Cooper curated the 2017 Brothers Block Party in Bed-Stuy. The Brothers Block Party is a week-long festival dedicated to celebrating men of color, highlighting their innovative work across industries, promoting small businesses and fostering community development. As Barry puts it, “The lives of men of color in this nation have long been adversely affected by negative public perceptions and portrayals, from being denied jobs and advancement opportunities to negative and often unwarranted police interactions. We aim to debunk these myths by erecting positive images of men of color”. To do this, Barry put together a collective of young men determined to change the negative stigma. The mission of the Brothers Block Party Coalition is to create impactful experiences that shift the narrative and offer a new voice to the table.

In the short span of 8 weeks, Barry was able to pull off a whole week of events geared towards reinforcing positive images of men of color in our community. Between October 3rd and October 7th, the panel discussions, networking events and mixers set the tone for a week of building new strategies and destroying antiquated myths. Tuesday’s event was The Gentlemen’s Factory, a networking event focusing on how to be groomed for success. Friday’s event was a panel discussion titled “The Provider”, discussing fatherhood. The culmination of the week was the block party. Originally set to take place inside the playground of PS 3 on October 8th, it was rescheduled due to rain and took place this Sunday at Banneker Playground on Lafayette Avenue. Speaking about the week, Barry said, “The week was geared towards giving men of color the tools needed to be a positive impact for their community. Each event was designed to touch the social and emotional thought process, promoting how to be triumphant through your adversity by networking and learning from men who have experienced success. The entire week served as an opportunity to share thoughts with brothers who get it”. Babatunde Akowe, Esq., co-founder of the coalition added, “As an attorney and community leader, this much-needed event is proof that we are actively engaged in changing the narrative of what is expected from our brothers, fathers and sons”.

Vendors hawked their goods. My friend Raeshawn and his band provided the score. And most importantly, Black men in our community came together for fellowship, instruction and to represent a positive spin on the perceptions set upon us by those focused on propagating overused stereotypes and myths aimed at criminalizing us as an entire group. It was a powerful day indeed, a needed happening put together by sons of the community, a show of responsibility and accountability and love for man, woman and child. In our nation’s current climate, love is the most important ingredient in whatever we set our minds to. Good work Barry. Spreading love has always been the Brooklyn way.

Business Spotlight on We Define IT

Telling Our Stories Through Griot Eyes