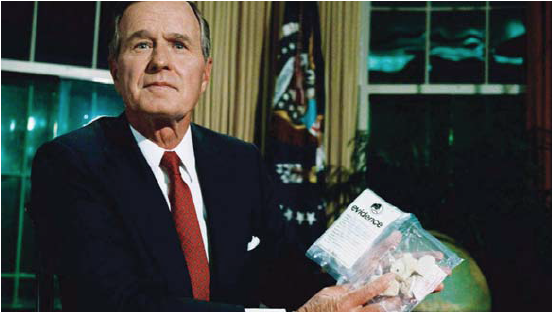 George Herbert Walker Bush died this week. He was 94 years old. Bush spent a lifetime serving America; as a fighter pilot, an ambassador, as the Director of the CIA, as Vice President and then as the President of the United States. Bush is the definition of American “blue blood,” a scion of railroad, steel and war money who made his fortune in oil and politics. His grandfather Samuel worked with Frank Rockefeller in the steel business. His father Prescott worked at Brown Brothers Harriman, and then became a senator. Four generations of Bush men before him all attended Yale and were all Skull and Bones members. It’s said that his father was one of the Bones men that dug up the skull of Geronimo, the famous Apache warrior and medicine man.

My point? You don’t get much more American than George and the Bush clan, their nationalism and service to country matching in step with their generational connections to power and their access to money and political positions. America views the Kennedys as this Camelot-styled empire, but the Kennedy lineage would pale in comparison to the influence of the Bushes, dating all the way back to pre-Civil War. Secret societies, industry, politics – the Bush name can be found at the base of each of the pillars of American society.

I put the family into this context for you because whether you join in mourning his death or you surreptitiously rejoice in it, you need to understand that George H.W. Bush was born and raised into enormous privilege and he would not think twice about utilizing that privilege no matter who the use of that privilege affects.

On September 5, 1989, President Bush made a speech from the Oval Office, announcing a renewed commitment to the “War on Drugs.” Now, for those who don’t know, this war on drugs was actually a war on the Black and Brown peoples of North, Central and South America, whereby the manipulation and the distribution of drugs, sanctioned systemically by organizations like the CIA, created a climate where thousands of Black Americans were killed, jailed or made to be strung-out and addicted, while many countries in Central and South America were destabilized and found themselves under direct or indirect American control. TV producers make light of what happened then with shows like Snowfall and Narcos, but there was nothing at all right and exact about this war. During the speech, Bush pulled out a baggie that contained almost an ounce of crack and said that the bag had been sold near the steps of the White House. It was a dramatic moment in the speech, certainly something to grab the attention of the nation. But what we didn’t know is that Bush’s team actually set the crack sell up, and that’s just the beginning.

Undercover DEA agents lured an 18-year-old named Keith Jackson down to the neighborhood adjacent to the White House, only to have him arrested for a drug sale. The young man had never even wondered that far into his own city before, he’s even heard in the recording asking the undercover agents, “Where is the White House?” The agents lured Mr. Jackson down to Lafayette Park, orchestrated the sell and then arrested him. After two deadlocked juries on the Lafayette Park case, Mr. Jackson was finally convicted of selling crack based on the work of the same DEA agents who were using Mr. Jackson to try to get to his distributor even before the White House fiasco.

In other words, Bush okayed the DEA bringing a low-level drug dealer into the park near the White House so that they could arrest him for selling drugs and parade the drugs and the collar on the national stage as a reason to ramp up this war on drugs. And when jurors deadlocked on that charge, instead of just letting him go they decided to convict him on another drug charge that was again fostered by the work of the DEA. Mr. Jackson received a mandatory 10-year sentence. At the sentencing the judge said, “Bush used you, in the sense of making a big drug speech.” When Bush was asked about the conviction he said, “The man went there and sold drugs in front of the White House, didn’t he? I can’t feel sorry for this fellow.”

White privilege is the most toxic, caustic attribute of our society because it uses whatever it needs to survive, like a parasite, only to detach and destroy you once it’s sucked all of your resources and freedoms away. And then it points at you as the problem. George H.W. Bush served his country well. He also served white privilege just as well. So, while there are many who are mourning his death, please consider the story of Keith Jackson when you come across those who believe that Heaven isn’t the destination of Bush’s one-way trip.

Thinker’s Notebook: The Dark Side of Your Phone