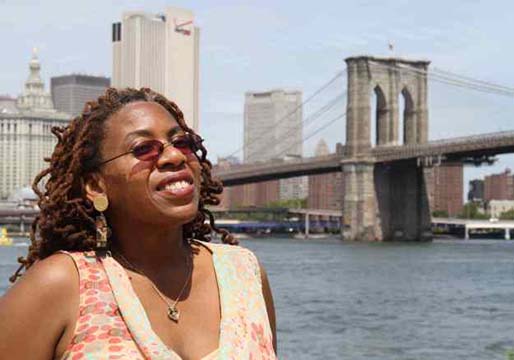 This weekend, the Reel Sisters of the Diaspora Film Festival concludes with a two-day line-up of films and documentaries. It’s highlighted by the festival’s first-ever Family Day of screenings on Saturday, October 21 at the Alamo Drafthouse Cinema in Downtown Brooklyn. There’s also a two-day lineup at the AMC Magic Johnson Harlem 9: on Saturday (21),Oscar-nominated actress Gabourey Sidibe makes her directorial debut (A Tale of Four) and director Tracy Heather Strain’s documentary on Lorraine Hansberry (Sighted Eyes, Feeling Heart) will be featured, among other films.  Sunday, October 22, a documentary short (A Portrait of Janie) by Our Time Press publishers followed by a post-screening discussion moderated by ImageNation Founder, Moikgantsi Kgama opens the Festival’s closing day.

For 20 years, Reel Sisters founder Carolyn Butts has given emerging filmmakers a chance to have their visions screened by the public, and she has created opportunities for established filmmakers to reach out and touch their audiences. Her acclaimed award-winning annual “Reel Sisters” Festivals have presented more than 2,700 films to the public, produced, directed and written by women of color.  The multi-faceted Ms. Butts is also the founder of the renowned African Voices, the quarterly magazine that gives writers and poets a glossy, upscale format to showcase prose, poetry and journalism, now in its 25th year.

So, applause and snaps for Ms. Butts’ pioneering work.  In fact, “Reel Sister’s” weekend themes aptly describe her: she’s concerned with how image impacts families and children of color — thus this Saturday’s Family Day (Oct. 21) in Brooklyn.  She’s also an activist and a journeywoman, which are among the themes covered in Harlem’s two-day series (Oct. 21 – 22).

For women of color on all levels of the industry this Brooklyn-based reel sister – who also is developing jobs for women behind the scenes as well as in front of the camera – this reel sister is a very real sister. For more information: www.reelsisters.org

THE REAL SISTER BEHIND “REEL SISTERS”

A Q&A with Carolyn Butts

OTP: How many women filmmakers — established and emerging — has “Reel Sisters” impacted over the last two decades?

We take great pride on being one of the first film festivals to join a movement to illuminate the importance of hiring women behind the camera in positions of power and create opportunities for women of color to have their films distributed.

Last year, Centric/BET TV offered first look deals to Soul City and the web series Everything I Did Wrong In My 20s. The National Black Programming Consortium picked up Pangaea, a short film on the impact of Hurricane Katrina, in its AfroPoP series. The film is now available with a study guide for schools and other community groups to share.

Reel Sisters has presented over 2,700 films produced, directed and written by women of color over the past 20 years. We have also distributed more than $25,000 in scholarship money since our inception. We have helped other organizations establish film festivals devoted to women of color and influenced many other festivals with similar missions. Reel Sisters curated The Links’ Women of African Descent Film Festival for the first three years — the festival still operates at Long Island University, the founding partner for Reel Sisters.

It is hard to pinpoint one moment but we helped spark a movement to push for equity for women in the film industry and have provided a space for audiences to enjoy our stories.

OTP: Do you see yourself as a game changer?

When women lead, the world wins. This is our answer to Trump. The images we see in film, television and media are important now more than ever given the climate we live in.

I think we are all game changers if we choose to be. We can’t depend on Hollywood or mainstream outlets. Most of the stories and films African Voices/Reel Sisters presents are centered on our history, culture and community and based on the concept of self-empowerment.

OTP: How can women of color develop power to have a stronger presence in the industry and Hollywood?

We have to use our own personal power outside of Hollywood to create job opportunities for African-American, African, Caribbean, Asian and other women of color. We must ban together to support film festivals and organizations like Reel Sisters to transform the industry.

One of the amazing examples happened at the top of 2017 with Hidden Figures. Families, sororities and fraternities came out in droves to ensure this exceptional Hollywood film about Black women’s role in NASA was a box office hit. What if we mobilized in the same way to purchase tickets to film festivals and organizations that showcase our films? It would be revolutionary because now we are creating cash flow for our filmmakers and the organizations that struggle to create platforms for our stories to be told.

Giving Hollywood our collective dollars for the small number of films that employ Black directors, actors and other cast has done little to address diversity in the industry.

Yet, Hollywood goes where the dollars are — if we use today’s technology and the film festival circuit to create an industry centered on our storytellers, we will begin seeing industry changes.

OTP: Did African Voices inspire the birth of Reel Sisters? And who were some of the artists and writers who supported your muse in the early stages of labor?

Yes, thanks for asking this question. My concept for Reel Sisters was directly inspired by African Voices. Our early muses and supporters included many writers and artists from the Black Arts Movement of the 1960s including Sonia Sanchez, Amiri Baraka, Layding Kaliba, Louis Reyes Rivera and Ruby Dee.

African Voices is a continuum and still builds on the rich foundation left by the generations preceding us.

OTP: If you were to turn the cameras on your life, what experiences, people, places, or stories would you share? And why?

My grandfather Rev. David Butts who built a church and community in Norfolk, Virginia is one of my deepest inspirations. He was one of the church leaders who marched with The Rev. Martin Luther King, Jr. in the south and he purchased and transferred dozens of lots of land in Chesapeake Bay to family and friends. I have recently been doing family research and realizing the rich legacy in my family and claiming it.

My fondest memory of my grandfather was him taking me to the spot where his church would be built and seeing just a heap of dirt and the stones that would be the foundation for his church. I was 10 and when I returned around 14 his church was built. I was amazed and realized years later the power of faith, creating foundations and building community.

I think that is what I have been doing for the last 25 years with African Voices and, for 20, with Reel Sisters: creating a foundation that will benefit a community of artists.

OTP: Why is technology the wave of NOW, and what other tools can they use to help them grow their work and themselves.

My vision is to have Reel Sisters travel the festival and have women from around the world to connect with each other.

We’re also working on providing distribution and income to filmmakers via streaming opportunities. Netflix and other streaming services are giving filmmakers greater access to not having to depend on Hollywood as the only model for creating a successful career in film and television.

I also can see Reel Sisters having our films accessible to an audience online where people from across the globe can enjoy our stories.

For more information on Carolyn Butts and this weekend’s full line-up at Reel Sisters of the Diaspora Film Festival, visit www.reelsisters.org.

A Reflection of Reel Sister’s Film Festival Production, “And Call Her Blessed: A Portrait of Janie”

My Mother in Me: MaryLouise Patterson on Louise Alone Thompson Patterson