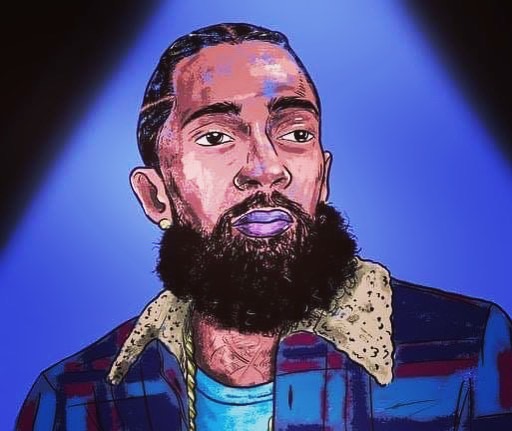 And he said, “Truly I say to you that no prophet is accepted in his hometown.

Last Sunday evening I was in my home with my two younger children. Mikaela was asking me to do her nails. Delasi was trying to eat loose Apple Jacks from the floor. It was a normal Sunday evening, not unlike any of the dozens of Sunday evenings that I’ve spent in my home with my children. Just like the rest of us, I’m connected at the hip with my cell phone, and you can find me checking my social media pages every ten minutes, like the news from 1010 WINS. Around 7pm, I’m scrolling through FB and I see that a friend posted an article that reads, “Rapper Nipsey Hussle Shot in front of his Store.”

For those who aren’t (at all) familiar with Nipsey, allow me to give you a brief description. Nipsey is from South Central LA, home to the Crips and the Bloods, home to Snoop and Dre and Ice Cube and NWA and The Game and a bunch of other talented genius minds that used the medium of music to transcend meager upbringings and the common pitfalls of growing up in an underserved community. Musically, Nipsey is akin to his predecessors, an agile lyricist that speaks about his life and times in Crenshaw. He has stated that he is a member of the Rolling 60’s Crips. Rolling 60’s was noted by the Los Angeles Daily News in 2004 as being the largest Black street gang in the city of Los Angeles, their rank and file number more than 1,600.

Gang life, though seemingly acute to those who haven’t been raised in such an environment, is presented with unbothered normalcy by those from it. In South Central LA, gang culture is ghetto culture. If you are raised in the ghetto, at some point you will need to make a decision about gang life. Other rappers have. Snoop is a Crip, like MC Eiht, Kurrupt, Nate Dogg and Eazy-E. The Game is a Blood, like YG, DJ Quik and Suge Knight. Rappers from the West Coast who become famous often rep their set in the same way that rappers from New York City rep their boroughs. Biggie said Spread Love, it’s the Brooklyn Way. P Diddy introduced the Harlem Shake. When you come from little to nothing, only to rise like yeast into a position of influence and fame, the one thing you do have that speaks to your truth is where you are from, the set that you claim.

So, in that way, Nipsey is no different than rappers before him or rappers since. But Nipsey was different. Ten years ago, as a young 23-year-old just finding his footing in the entertainment industry, he was asked about whether or not he was going to spend money on gold chains. His answer was, “Yeah, all that is cool for the image or whatever. But they are liabilities. I’d rather invest in real estate and other kinds of assets.” To put this statement into context, understand that materialism and hyper-consumerism are staples in today’s hip-hop. Most rappers, by and large, seek to portray a lavish and decadent lifestyle, rhyming about the hottest cars, clothes and diamonds. The effects of this messaging have had grave consequences for many inner-city communities, and the cause of it is layered and too nuanced to explain in one article. But Nipsey already understood the trap even before he began seeing any money from rap. He understood that assets were more powerful than liabilities, and as he began making inroads in the industry, he also began to make good on his vision to invest in assets. Nipsey purchased an entire strip mall in the heart of Crenshaw. He opened his own store, Marathon Clothing, in the strip mall, and he had plans to eventually scrap the mall and replace it with a six-story residential property anchored by commercial businesses along the ground floor. In every interview, at every occasion, Nipsey used his platform to speak about investing and actually owning a piece of your neighborhood. He loved his neighborhood. He loved his children. He loved his girlfriend, actress Lauren London. This is what he used his voice for to share with the world. And in that way, he was a prophet, an inspired teacher who used his space and time to educate others on how to live.

An hour after I read that Nipsey was shot, CNN reported that he had died of his wounds. He was killed in the strip mall he owned, in front of the store he created, in the neighborhood he grew up in. His death sent ripples through the entire nation, coast to coast. And while he was a Grammy-nominated musician, those that mourn him speak first about his mind and his heart and his consideration for community and for the love he showed for his family. They say Nipsey was a good man first, and a good rapper second.

On Tuesday, the LAPD arrested Eric Holder for the murder of Ermias Asghedom, the man we know as Nipsey Hussle. Eric Holder is a member of the Rolling 60’s Crips, like Nipsey. He’s from the same neighborhood as Nipsey. In the Bible, Luke 4:24 states that, “No prophet is accepted in his hometown.” Nipsey supported, helped and educated hundreds, if not thousands, of people from his community, but he couldn’t fix the jealousy that is created when people that come from the same nothing as you cannot understand how you have ascended out of that nothing and into greatness, even if you spend your entire life telling them how.

Thank you for your service Nipsey. Thank you for using your life as a living example. Those of us who understood your ideals will continue to educate the communities that need it the most. The race isn’t over. The Marathon continues.

A Joyful Noise, A Quiet Place