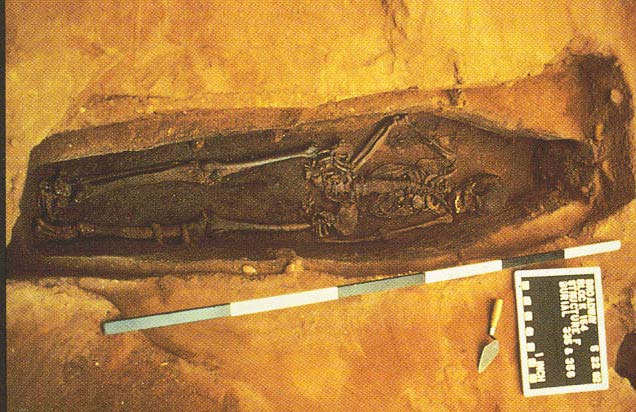 Early Resistance
The first African captives arrived in Dutch New Amsterdam in 1626 from West and Central Africa and later from Caribbean plantations. Due to constant conflicts with Native Americans, the Dutch created a buffer zone for themselves by granting Africans “half-freedoms” and small parcels of farmland outside the city walls about 1643.

Since the ABG is located in this area, Africans may have begun burying their dead there soon thereafter, although as yet there is no conclusive documentary evidence of this. The marginal spatial location and the respective marginal social positions of Natives and Africans meant that their settlements were likely locales for intercultural social and economic relations (Foote et al. 1993; Taylor 1992).

When the British colonized New Amsterdam in 1664, the 700-plus Africans constituted 40 percent of the population. This percentage was greater than in any other English settlement except Charleston, South Carolina, and more than was found in any northern settlement. The British revoked African half-freedoms, instituted harsher laws, confiscated African lands and imported more Africans for sale to the south.

There were a number of insurrections by Africans in this area during the 18th century, and the highest proportion of escapees with a greater likelihood of success than elsewhere on the continent (White 1995). Indeed, individuals allegedly involved in these revolts were executed at the ABG (Barto 1991; Will 1991). New York gradually emancipated Africans from 1799 to 1827, but census and court records indicate that slavery continued at least until the 1860s (Jaffe 1995).

The ABG is the oldest (late 1600s to 1796) and largest (five to six acres) African descendant cemetery excavated in North America to date. Situated near the banks of the Collect Pond, the ABG not only provided privacy but its location near water was in keeping with the common central African practice of associating cemeteries and bodies of water (Foote et al. 1993; Thompson 1984).
After 1750, several noxious chemical industries desecrated the ABG by disposing of their wastes there; medical students at New York Hospital also stole corpses for dissection. During the ABG occupation, Africans seem to have controlled their own funerals, mortuary and burial practices, but not without resistance (Blakey 1997; Foote et al. 1993; Harrington 1993; Jamieson 1995).

Furthermore, only during funerals were Africans permitted outside after sunset and to gather in unsupervised groups larger than three persons. In 1731, the British sought to curb African subversive activity by passing laws requiring daytime burials with limited attendance. Palls (the cloth used to cover a casket during the funeral and procession to the grave site) and pallbearers were also banned at African funerals (Epperson 1997). These laws suggest that the British suspected that African funerals were used to mask insurgent activity.

Recent Struggles
Today, the ABG is located under some of the most valuable real estate in the world. It is estimated that from 10,000 to 20,000 first-generation African- Americans were buried in the ABG. Since only 14,000 square feet were excavated, most of those interred remain beneath the city. In 1989, the GSA sought to purchase a block of land from New York City. The plan was to erect a $276 million federal office building in lower Manhattan. Documentary research conducted for the GSA by the Advisory Council on Historic Preservation (ACHP) and NYC Landmarks Preservation Commission (LPC) indicated the presence of a “Negroes Burying Ground” on the proposed building site. In 1991,the GSA, as mandated by the National Historic Preservation Act of 1966, contracted Historic Conservation and Interpretation (HCI), an archaeology consultant firm, to begin fieldwork. The study of the human remains was contracted to the Metropolitan Forensic Team (MFAT) from Lehman College.

Since the excavations began without any significant community consultation or participation as to the treatment of the cemetery-as required by the mandate of scientific requirements for the preservation of the site’s history-there was immediate and often volatile reactions to the excavations by the African descendant community (see the Kutz video series for an account of these events).
In 1991 burials were disturbed by construction workers, further alarming the African descendant community. Community persons who were monitoring the excavations and had seen the remains at Lehman College complained about the way the skeletons were being conserved. Problems included remains wrapped in newspaper under improper environmental conditions and inadequately stored on top of each other (La Roche and Blakey 1996).

The descendant community condemned this behavior as disrespectful, arrogant and insensitive. Their encounter with contract archaeology made it clear that the few African- American archaeologists who exist were never consulted or involved in the ABG research in any substantive way. It also became clear that consulting firms reap huge profits from studying African -Americans and strongly influence how African- Americans are historically defined. These were major issues of concern and contention for the African descendant community (LaRoche and Blakey 1996).

Since MFAT and HCI failed to produce a timely and comprehensive research design, and had treated the remains unscientifically and disrespectfully, the descendant community demanded that the remains be placed under the care of Michael Blakey, one of the few African-American biological anthropologists in the United States. Blakey, who is a professor of anthropology at Howard University in Washington, DC, was concerned that HCI and MFAT had no experience in African or African- American history, cultures or skeletal biology. He was also aware that when archaeologists used construction equipment to remove the earth down to the burial outline, they had already destroyed artifacts that Africans customarily placed atop their graves and coffins (Satchel 1997).
The descendant community, cognizant of the ignorant portrayals of African diasporic history, recognized that archaeological interpretation is an active and subjective struggle between contending versions of history that demands political engagement (Gathercole and Lowenthal 1994; Schmidt and Patterson 1995). To insure that the spiritual, cultural and inspirational significance of the site and its contents were subject to African-centered paradigms and scholarship, they demanded incorporation of African descendant voices and histories (La Roche and Blakey 1996). They insisted that those working on the project have a knowledge of and respect for African diasporic studies and a commitment to their struggle to reclaim their past. For the descendant community, the skeletal remains and the ancestral possessions are the only concrete material evidence of the lives of this first generation of African- Americans in New York City. As such, they constitute powerful links to a shared African past.

In 1992, David Dinkins, New York City’s first African- American mayor, and U.S. Rep. Gus Savage of Illinois, who chaired the House Committee for Building Funds, were able to establish an advisory committee on the project, halt the excavation and close down the site. At the request of the African descendant community, New York State Senator David Paterson, who is also African- American, formed an oversight task force for organizing various forms of political activity around the ABG (Howson 1992). The descendant community continued to press for the involvement of African American scholars in directing the research, analysis and interpretation.

In 1993, Howard University gained control over the research project and, along with John Milner Associates (JMA), another contract archaeology firm, submitted a more comprehensive research design to ACHP that incorporated the concerns and desires of the descendant community. The archaeological materials were placed in the Foley Square Lab under JMA, while the 400-plus human remains were transferred to the Cobb Biological Anthropology Laboratory at Howard University. Pageantry and celebration accompanied the caravan of remains from New York to Washington, DC, with stops at historically significant African-American churches in several cities along the way. The transfer culminated in a ceremony entitled, “The Ties That Bind” at Howard University.

The descendant community and its allies were in evidence throughout the transfer celebration. Representatives from the African- American community, the U.S. Muslim community, the Native American community, and from the Akan in Ghana were all in attendance at Howard. In 1994, African chiefs from Ghana returned to Howard on a tour of Fihankra, a movement of unity that involves prayers and rituals for forgiveness to the ancestors to atone for colonial-era involvement in the trade of African captives.

Current Research Project
The current scientific project constitutes yet another dimension of the struggle for control of the ABG. We seek to illuminate the impact of African captivity upon the lives of our ancestors and their living descendants, and to reconstruct knowledge of their origins and identities that were deliberately distorted in the effort to bolster the identity of Euro-Americans at the expense of African- Americans (Blakey 1997). As scientific director of the African Burial Ground Project, Michael Blakey has brought together a national and international research team of scholars from Africa and the US who are concerned with creating alternative histories. The ABG Project has evolved into a multi-disciplinary scientific effort comprised of complementary natural and social science teams with expertise in the African diaspora. These include: molecular genetics, bone chemistry, skeletal biology, history and archaeology (African and African- American), ethnology, conservation and African art history. This collaborative effort has global and universal implications, transcending any particular discipline or the interests of any one segment of the descendant community.
These organizational changes have resulted in the selection of four basic research questions to guide our scientific analyses. They are relevant both for activist scholars and the descendant community:
1) What are the cultural and geographical roots of the individuals interred in the African Burial Ground?
2) What was the physical quality of life for Africans enslaved in New York City during the colonial period and how was it different from the quality of life in their African homeland?
3) What biological characteristics and cultural traditions remained unchanged and which were transformed during the creation of African-American society and culture?
4) What were the modes of resistance and how were they creatively reconfigured and used to resist oppression and to forge a new African- American culture?
In addition to the scientific teams, the ABG has an Office of Public Education and Interpretation of the African Burial Ground Project (OPEI), directed by Dr. Sherrill Wilson. OPEI’s primary roles are to educate and inform the public of ABG project events, to assure public access to the site, the skeletal and artifactual remains, and to allow appropriate cultural ceremonies to commemorate the ancestors. It also provides community involvement/education activities such as educators’ symposia, laboratory tours and two newsletters that updates the public on the research and introduce archaeology, anthropology and conservation to children and adults.

Conclusion
New York City’s ABG Project is a case of archaeology as community service. It emerged from a protracted struggle over control of the ABG and its products between an organized descendant community and its allies, and the GSA and archaeology consultant firms. This struggle has resulted in an increased awareness of the disciplines of anthropology and archaeology within the African descendant community. It has produced a public education program that facilitates a reciprocal dialogue between researchers and the general public, maximizing the interpretive potential of the archaeological record and creating an historical consciousness that challenges the distortions of Eurocentric history (Singleton 1995).

Through this struggle, the descendant community and its allies have successfully achieved the incorporation of African- American scholars in the creation and maintenance of a research design and agenda that establishes a prominent role for historically under-represented African- Americans in the analysis and interpretation of an internationally renowned archaeological site (Mathis 1997).
By taking moral responsibility for the spiritual and physical control of the site, the descendant community seized intellectual power-forcing changes in the composition and direction of the professional leadership of the project (La Roche and Blakey 1996). The original, ancestral ABG community and the modern descendant community have used this sacred social space to resist and to honor their African heritage in spite of institutionalized racist disrespect. The struggle for the proper treatment of the ABG reaffirms its significance in the past and gives the site continued significance in the present; it is an important part in the legacy of struggle to control and interpret the African past.
(Entire article with references available at: http://www.stpt.usf.edu/~jsokolov/burialgr.htm)