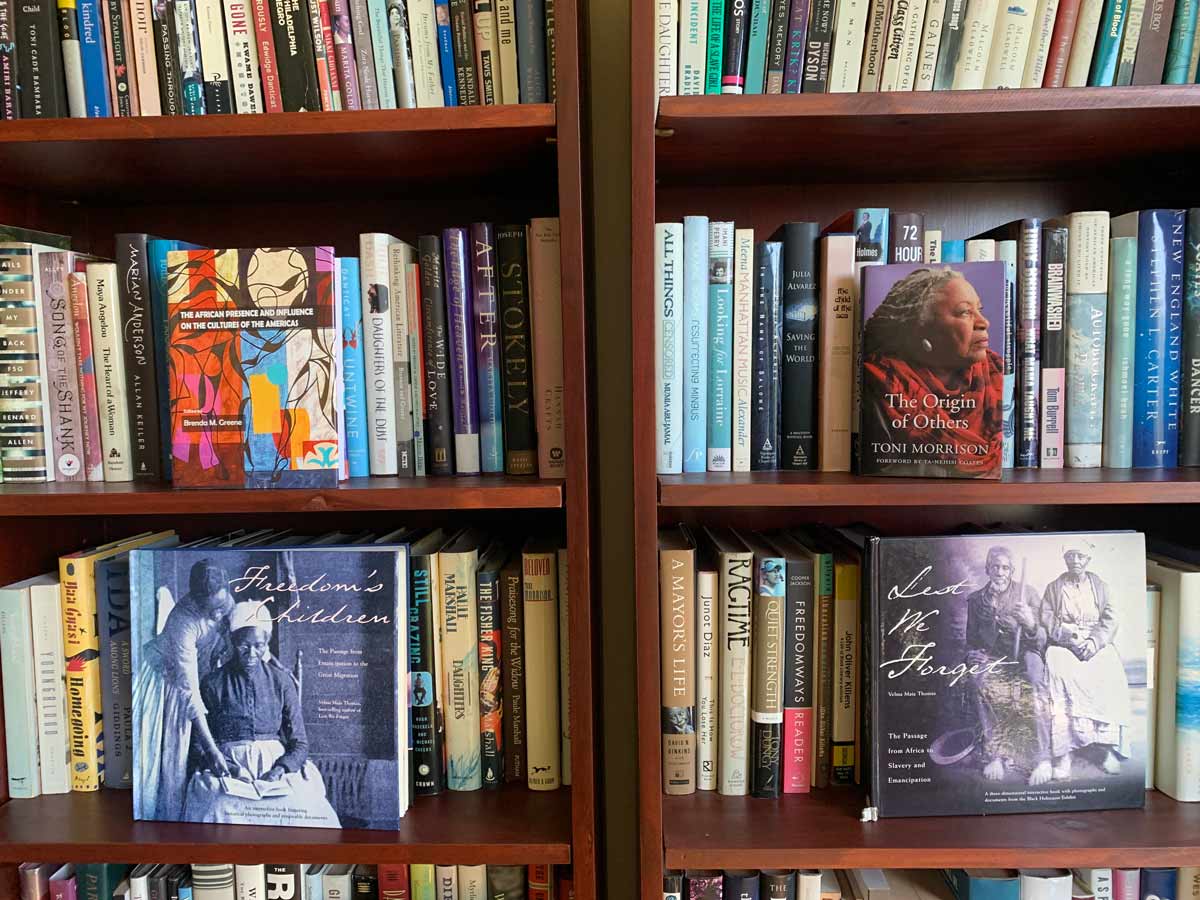 The Issues
Dr. Haki R. Madhubuti, poet, publisher, editor, educator, founder, and publisher of Third World Press and featured speaker at the 16th National Black Writers Conference, stated: “ I believe deeply in book culture. To develop a critical mind, one must challenge the mind just as one challenges the body to gain and maintain health, endurance, and strength.” Books are the key to deepening our understanding of our lives and experiences and developing a critically conscious culture. If we are to develop a book culture, then Black readers must support Black writers and engage with and invest in Black booksellers, publishers, and presses.

We see ebbs and flows when we look at the number of publishers and presses producing books by Black writers. The reasons vary and fail to account for unique literary texts across a range of genres that represent the substantive and complex stories, poems, and essays written by Black writers. Black writers offer what Toni Morrison calls a black gaze on their experiences as Blacks throughout the African diaspora. Their prose and poetry resist stereotypes and illustrate the full range of the human experience.
In discussing the state of publishing, Marie Brown, a Black literary agent and a 40+ year veteran of the Black publishing industry noted, “The workforce in publishing is more than three-quarters white, and the heads of the big “four” publishing houses are White.” Brown underscored the fact that the determination of who gets published is in the hands of a few mainstream publishers

In 2018, a group of those sympathetic to the racial disparity in publishing formed a Publishing Day of Action. After more than 1000 people signed up for the Day of Action, many publishers signed statements indicating that they were committed to racial equity and condemned racism in publishing. However, the group decided that more was needed and wanted more evidence to support their observations of racial disparities. They conducted a study and identified the race of the authors of 7,124 books. Their findings revealed that 95 percent of the authors of the 7,124 books were White. (www.nytimes.com/2020/06/08/books/publishingpaidme-publishing-day-of-action.html)

Additionally, the group found a major disparity in the amount of money. Black writers are paid compared to White writers. Jesmyn Ward, a National Book Award winner for her novel, Salvage the Bones (Bloomsbury, 2011), tweeted about how she had to fight for a $100,000 advance, even after her book had won a National Book Award. When the writer Nana Kwame Adjei-Brenyah received a call in 2017 that Mariner Books wanted to publish his debut
short-story collection, Friday Black, he was ecstatic. He suspected his contract to publish his book was low, but he accepted it because he needed the money. He later found out, while using the hashtag #PublishingPaidMe, that there were major racial pay disparities in publishing. Some white authors disclosed that they had been paid hundreds of thousands of dollars for their debut books. Adjei-Brenyah was paid $10,000.
(www.nytimes.com/interactive/2020/12/11/opinion/culture/diversity-publishing-industry.html)

Tonya Pendleton, a writer for TheGrio, provides further evidence of the disparities in the publishing industry in her article, Black authors on New York Times top 10 book list draw backlash – TheGrio. She notes that the publishing industry has experienced accusations of racism and cites Richard Jean So in the book Redlining Culture: A Data History of Racial Inequality and Postwar Fiction. According to the research of So, between 1950 and 2018, 95% of the books published by major firms were written by White people. And in 2018, White people wrote 89 percent of books published that year.

Furthermore, in 2020, only 10 percent of the New York Times best-seller list were written by people of color. The History of Publishing Is a History of Racial Inequality | The Nation So argues that the history of postwar American publishing is one of white stasis, where only a select few people of color are given opportunities to be published and promoted. He charges that “you can find the unmistakable domination of whiteness, and this ought to make everyone, especially literary scholars, question received narratives about the success of multiculturalism in American arts and letters.”
This argument also supports an observation by literary agent Marie Brown. She noted that there is an appearance that more Black books are being published. This is a result of the fact that many White editors are not exposed to Black life behind the headlines. Publishers’ interest in amplifying Black voices wanes as the media coverage peters out. For example, there was a direct correlation between the rise in Black books in the New York Times Review and the rise in the Black Lives Matter Movement. Publishers were awarding more contracts to Black writers, and more were being reviewed.

Linda Duggins, a veteran publicist and literary activist provides another factor that may contribute to the appearance of more Black writers being published. She reminds us that we have to distinguish between authors and writers. An author of a book is not necessarily a writer who has created the content and crafted the book. Writers write books, articles, stories, plays, and poetry as an occupation or profession. Books may be co-authored by writers and by those who are not writers by trade. When you look at the number of celebrities, athletes, and politicians being published, many of whom have books that are co-authored, you may get a distorted view of the number of Black writers being published.

Literary prizes may also provide the impression that more Black writers are being published. During the past decade, more than half of the ten most recent books awarded the National Book Award for fiction were written by people of color. Colson Whitehead won the Pulitzer prize for fiction twice. The National Book Awards, established in 1950, are a set of annual prizes to honor the best literature in America. The Awards currently recognize the best Fiction, Nonfiction, Poetry, Translated Literature, and Young People’s Literature published each year. Panels of judges in each category narrow a list down to five finalists. Over the last ten years, the number of honorees who received the National Book Award dramatically increased from two in 2012 to 16 in 2021. However, in 2022, five of the Honorees were Black.

There is further evidence that the perception of an increase in the number of books written by Black writers is flawed. In 2022, two of the writers on the New York Times’s top ten list were Black; in 2020, four of the top sellers were Black, and in 2019, two of the top ten were Black. Tonya Pendleton’s article in TheGrio is entitled Black authors on New York Times top 10 book list draw backlash – TheGrio notes that there was a backlash that the authors listed in the top ten were “too woke.” In short, they were criticized as being too “politically correct.” This is symptomatic of the backlash received when President Barack Obama was elected, and there was a steady and concomitant rise in white supremacy, voter discrimination, attacks on our democracy, an increase in domestic violence, the banning of books, and a denunciation of critical race theory.

One commentator on TheGrio wrote that the list was too “politically correct” and suggested adding a book by an award-winning white male author. A commentator from Ireland wrote: “Fiction should not be a tool to promote a specific agenda. The best fiction has always subtly highlighted social issues, injustices, etc. So frustrating to realize 50 pages into a novel that the agenda takes precedence over the storyline.” These reactions suggest that although the authors of these books were short-listed for other awards, they were deemed by certain commentators as not worthy of the acclaim received from the New York Times. There were only three comments cited in this article. Still, when you look at racial disparities in publishing, along with the rise in systemic racism in this country, there is evidence to suggest that these reactions are indicative of the views of more than several people and speak to a broader perception regarding the challenges facing Black writers.

Lastly, we cannot underestimate the impact of digital technology on the publishing industry. It is clear that the rise in eBooks and audiobooks, and the dramatic rises in online sales of books, have caused a decline in the printing of books. While this is a concern for the four major publishers, it is particularly significant for independent Black publishers, presses, and booksellers who must consider new and alternative ways to get their books to readers.

Dr. Brenda M. Greene is the Founder and Executive Director of the Center for Black Literature and Professor of English at Medgar Evers College, CUNY. She is a columnist for Our Time Press.