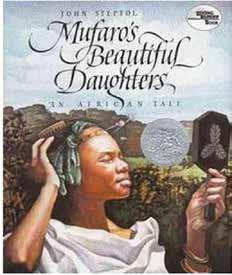 Now, three of his classic works, Mufaro’s Beautiful Daughters: An African Tale Baby Says and Stevie (written in 1969 when he was 16 and published three years later) were reissued recently.

On Saturday, March 30, 11am, Steptoe’s daughter, Bweela, also a writer, will be at the Macon Public Library (361 Lewis Avenue, BK) reading from all three books for which she wrote the forewords. “His books focus on a variety of different life lessons. He wrote and illustrated books that people of color could relate to when there were no children’s books reflecting on the Black Diaspora and the basic life experiences that we all go through.”

“All three books can be used in STEM programs; all three focus on nature,” she reflected. In Mufaro’s Beautiful Daughters” everything is authentic to Zimbabwe: every plant, animal and structure. My father did a lot of research with this book. A lot of us may never get to go to Zimbabwe, or Africa for that matter; reading this book takes us there. The crown that I wear on my head on the front cover of the book actually is from Japan. Zimbabwe was once a main port where they traded with other countries.

“The Story of Jumping Mouse” is based on a folktale about a mouse who travels throughout the forest giving and receiving gifts from other animals, learning a lesson from each animal and realizing his special gifts during his journey. This is the only book that my father created with the animals as characters.

“Mother Crocodile,” an African folktale, is multidimensional in its perspective on history and ecology.

On the eve of the 30th Anniversary of his untimely passing at age 38, Steptoe’s children, daughter Bweela – one of the models for many of his books, and his son, Javaka, the award-winning writer and illustrator, continue promoting his legacy–will read and sign books at different events throughout New York City, including Greenlight Bookstore on Fulton Street (4/20), Strand Bookstore in Greenwich Village (4/7) and Sisters Uptown Bookstore in Harlem (5/4). Steptoe, Sr. was the illustrator of 16 books, of which he wrote ten. For more information, visit: bweelasteptoe.com.  (bg)