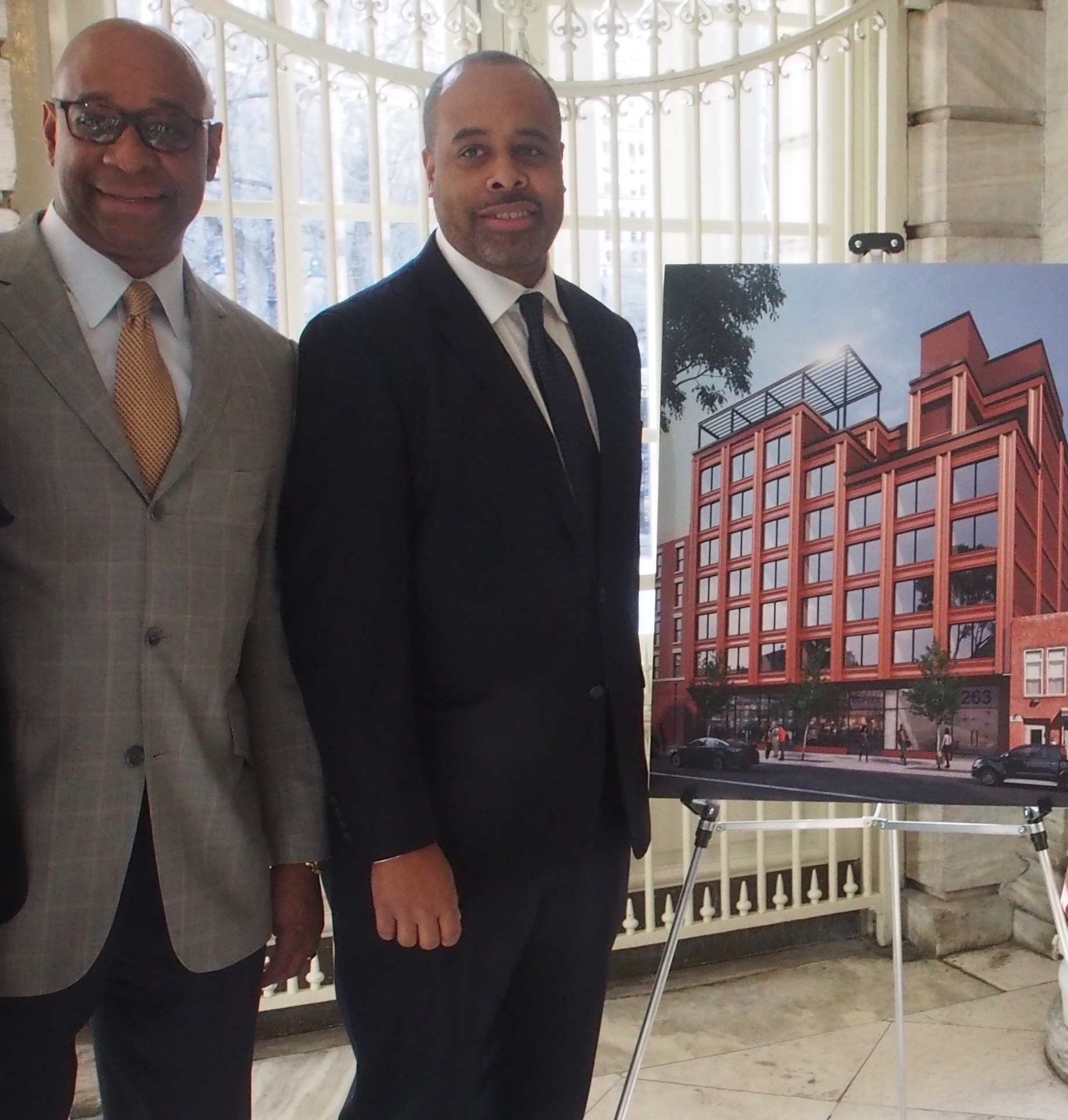 Prior to the roundtable, Mayor Bill de Blasio chatted individually with the MWBE winners who stood proudly beside renderings of the façades for their proposed buildings.

According to city records, certification as an MWBE was an essential requirement for this construction award. Housing Preservation and Development (HPD) issued a Request for Qualifications from firms which was due March 25, 2015. Among many items, applicants detailed their backgrounds, residential development and property management experience, and company assets. HPD assessed responses and prequalifications to compete once the official request for proposals (RFP) was released. Records show that with the exception of two developers, prequalifiers participated in the HPD workshop series on Building Capacity which provided networking opportunities with top-notch real estate professionals and insight into how to run a successful real estate development enterprise.

Andrea Kretchmer and Annie Tirschwell of Type A Projects.

The six winning developers have “established a relationship with the communities where they will build . . . and they reflect its diversity,” said Commissioner Vicki Been of HPD. She added that this project will provide 440 of the 62,000 units Mayor de Blasio hopes to construct.

Richard Flateau, Chair of Community Board 3 in Bedford-Stuyvesant, “lauds the de Blasio Administration for achieving the dual goal of building 100 percent affordable housing and using M/WBE firms as the lead developers”. In the rotunda and during the roundtable discussions, developers shared their varied backgrounds and expertise.

MacQuesten Construction Management, Rella Fogliano, President. On-the-job training in her father’s firm in the 1980s provided Fogliano with the experience and knowledge of development and financing. In 1992, she successfully developed sixty-three units of affordable housing in the Bronx. She will bring her expertise to 1510 Broadway in Bedford-Stuyvesant where she will develop Broadway Commons Triangle, fifty-nine units which will include an elevated play area for children and adults.

C-B Emmanuel Realty, Ben Upshaw, Project Manager and Richard Bramwell, Jr. Upshaw brings fifteen years of real estate development to housing and with Bramwell will lead the development at 461 Alabama Avenue in East New York, Brooklyn, which will provide fifty-five units for the homeless and an office for a not-for-profit.

Dabar Development Partners, LLC, Dawanna Williams and Thorobird Real Estate, Thomas Campbell. With a A.B. in Economics/Government from Smith College, an M.P.A. from Harvard University Kennedy School of Government and a J.D. from the University of Maryland School of Law, Ms. Williams also brings twenty years of experience in commercial real estate. Her partner, Thomas Campbell, holds a B.A. in economics from Colgate University and an MBA in real estate, finance and entrepreneurship from Columbia Business School.   In addition to his formal education, Campbell brings seven years of affordable housing development to the table. Dabar and Thorobird will develop 1921 Atlantic Avenue into 183 units of housing for seniors and low- and moderate-income households. In addition, provisions will be made for Oko Farms, Neighborhood Housing Services (NHS) and a fresh, good grocery store.

Apex Building Company, Robert Horsford and Lemor Realty, Harrison Rayford. Robert Horsford (General Contractor), a third-generation real estate developer with twenty years of experience in development, partners with Harrison Rayford who holds a B.A. from Morehouse and an M.S. in real estate development from NYU. Rayford shot to full-time development associate upon graduation. He joined Lemor Realty in 2012 where he co-founded Lemor Development Corporation and led the development of fifty apartments. Implementing a passive house design, the two firms will bring twenty-nine homes to Balton Commons, 263-267 126th Street in Harlem. The site will include a coffee shop and a tech incubator company, Silicon Harlem, geared toward STEM enrichment and education for high school students.

Infinite Horizons, Randall E. Powell and Roland E. Powell. With B.A. and M.S. degrees from Hunter College in political science and housing and community development, respectively, Randall has served in various capacities. He brings over twenty years in general contracting experience. With his brother Roland, they will develop Infinite Horizons–comprised of twenty units featuring a green roof and solar panels at the 359 East 157st Street site in the Melrose section of the Bronx.

When discussing the intent of his team, Harlem developer Robert Horsford stated their goal was to “create a great facility for the community to live in, and one the community could be proud of”. This statement could well reflect the sentiments of the mayor’s office and each of the winning developers.

Margo McKenzie is a contributing writer for Community Affairs. Watch for the February 1st relaunching of her blog: giftofletters.com.