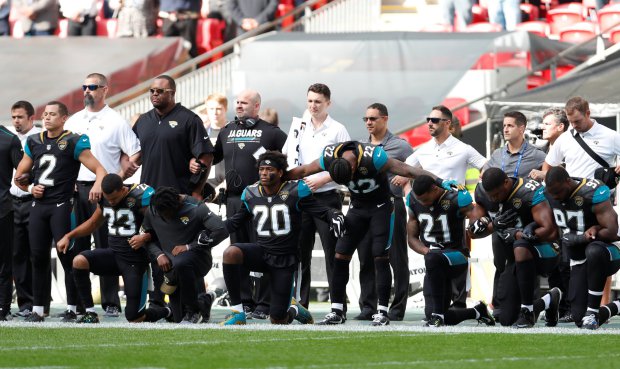 Last week, the National Football League issued a un-American policy that will prohibit players from protesting the National Anthem by kneeling on the field. This new policy is a manufactured and forced form of patriotism that specifically targets people of color, and it should not be tolerated.

This violation undoubtedly targets players of color. Black athletes make up 70 percent of the NFL, while 94 percent of the League’s franchise owners and 74 percent of head coaches are white. The attempt to silence the majority of players for bringing attention to an important societal issue must not be taken lightly. Fans, viewers, and Americans can see that this sad attempt to “compromise” only serves as a distraction from a much-needed and broader conversation about racial injustice and police brutality.

As a son and grandson of former members of the NYPD and of our armed services, my respect for our first-responders and military is without question or debate. However, people of color across our country have time and time again been subject to violence and inequality. The injustices committed against people of color range from being followed around in a store, to being murdered at the hands of law enforcement. It is this brutality that motivated San Francisco 49ers quarterback Colin Kaepernick to take a knee. The truth is uncomfortable and ugly, but it is a reality we must face head-on in order to correct society’s wrongs.

Throughout last season, NFL players followed Kaepernick’s lead. Dozens of players from clubs across the country chose to exercise their right to peaceful protest, and many of us decided to throw our support behind them, acknowledging their fight and the reasons they offered by also taking a knee as the stars and stripes waved above. Not because we hate our country, but because we know our country can do better.

In the words of American novelist James Baldwin, “I love America more than any other country in the world and, exactly for that reason, I insist on the right to criticize her perpetually.”

Injustices against people of color continue every day, in every town, and in every city across our great nation. It doesn’t matter if you’re a professional athlete, a student, waitress, teacher, advocate or a civil servant. If you feel an injustice, you have a right to show the world you want to see a change. Take a knee against the NFL.