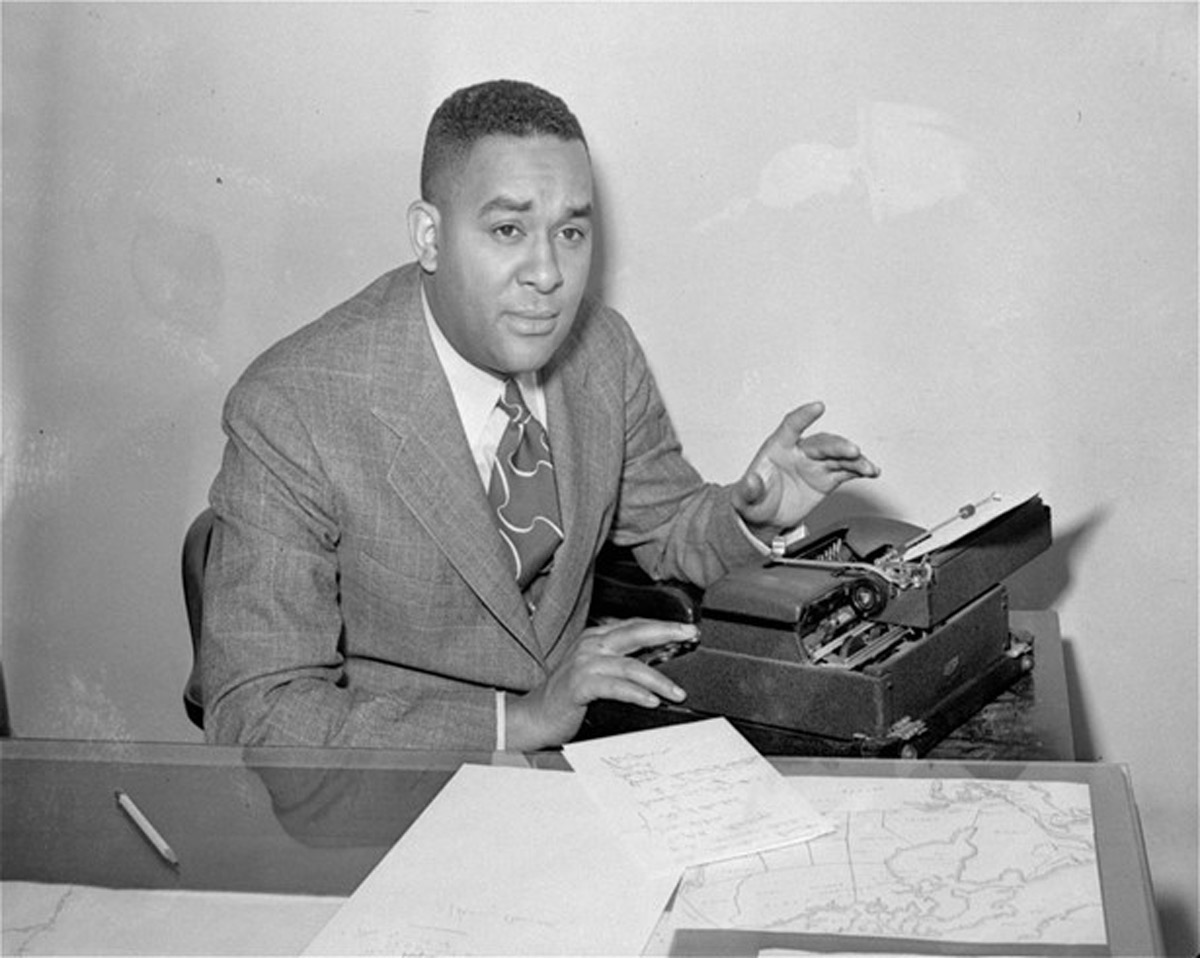 Richard Wright, at 37, at his typewriter in New York, March 27, 1945, was determined to help blacks win economic rights. (AP Photo)

Dr. Rudy Cain’s
Letter to the Editors
I recently learned that Carlton Ave./Myrtle Ave. has been re-named Richard Wright Way. As a 45-year resident in the area and someone familiar with Wright’s contributions to the literary genre, I was absolutely shocked at this revelation, since there appeared to have been little public notice of the change and/or planned ceremony which normally accompanies such newsworthy events.
As a regular reader of OUR TIME PRESS, I would have expected some mention of the event, if indeed there was one. I simply don’t recall coverage of an event.
Your informed reply is appreciated.
Sincerely,
Rudy Cain

Dear Dr. Rudy Cain:
Thank you for your letter of May 9.
According to the information we found, a half-hour co-naming event in honor of the great author Richard Wright took place on March 7, 2022 at the southwest corner of Carlton and Myrtle Avenue. Our Time Press did not cover the event.

It is reported that community leaders, including community leader Laurie A. Cumbo, writer Carl Hancock Rux and Derrick Cross offered remarks. Ms. Cumbo was instrumental in launching the effort along with the Carlton-Willoughby Block Association and the Myrtle Avenue Brooklyn Partnership.

As you know, Mr. Wright lived on Carlton Avenue near Willoughby in a brownstone apartment after moving to Brooklyn in 1937. From a desk in that building and a bench in nearby Fort Greene Washington Park he penned his acclaimed “protest novel” that reportedly changed American culture – Native Son.

Of note, Wright also may have resided for a short while on Lefferts Avenue in Clinton Hill.
To say he was ahead of his time is to give him no credit for what he accomplished during the times his life could claim: tell the story of torment in the black experience through a clear lens. The central themes of racism, violence, poverty, oppression, suppression and hunger and their impact on the Black experience were evident in his works and in the souls of his troubled characters. he followed the Harlem Renaissance, as a purveyor of the reality story and perhaps the early precursor of the Black Arts Movement of the 60’s where the arts, driven by creative engineers, propelled itself from subtlety to amplified protest, pain and tribal love.

According to BK Reader writer Jessy Edwards in a story published December 22, 2020, “Wright lived in an apartment on the block in the 1930s while he was writing Native Son. It’s said that he wrote much of the book on yellow legal pads while sitting on a park bench in Fort Greene Park.

“His landlord and friend Jane Newton reportedly wrote that Wright would wake around sunrise every day to make the short walk to the park to write. Some days were gray, some days he returned after being caught in the rain.”

Published in 1940, the book – about the story of Bigger Thomas, 20, who lived in poverty during depression era Chicago — was the first bestseller by a Black author.
“The day Native Son appeared,” wrote Ms. Edwards, “American culture was changed forever, American literary critic Irving Howe said in a 1963 essay. ‘No matter how much qualifying the book might later need, it made impossible a repetition of the old lies.’”

Ms. Edwards further noted, “The book is credited with changing the conversation around the racial divide in America and the persistent systemic racism affecting African Americans in this country”.

Dr. Cain, on Tuesday afternoon, we walked over to Mr. Wright’s … and currently, your … neighborhood to get a sense of how the area may have looked to Wright when he lived there. Our aim was to capture some landmarks — like trees, bricks and brownstones that may have caught his eye. The signage unfortunately does not give the impression that Mr. Wright’s presence is within the block’s embrace. We don’t recall a sign, at the other end of the block at Carlton/Willoughby, for instance. Where there are more trees.

It would be interesting to see Richard Wright through your scholar’s eyes, Dr. Cain, in a comparison of his message with the “Black Lives Matter” mantra. We are particularly interested in Wright’s early commitment during the 30’s, 40’s and 50’s to writing for the purpose of being “a voice for the (voiceless)” — a reading audience that may have been ignored during those times.

And while Civil Rights activist Stokely Carmichael, in the late 1960’s, broadcast the phrase, “Black Power!”, Wright, documented, carved it into prominence as a title for his book on Pan Africanism published in 1954.

Again, thank you for reminding us to share this chapter in the history of a neighborhood in Brooklyn.