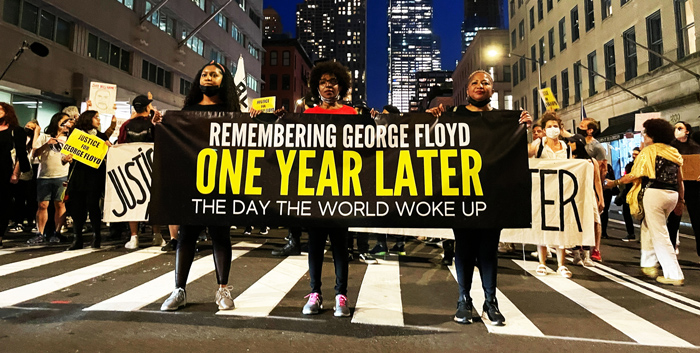 Which Way the Inflection?
One year after the murder of George Floyd there is a lot of talk of the country being at an inflection point in race relations, and we certainly are. The question is “Which way is the inflection?”
On one hand, there is hope that the outpouring of outrage at the murder of Mr. Floyd and the resulting George Floyd Justice in Policing Act of 2020 will help bring about reform of the practices of police departments that will protect Black people from the worst inclinations of bad-acting officers.
On the other hand there is a bunch.
Across the country, Republicans are fighting against the teaching of “critical race theory,” or how racism is part and parcel of U.S. history.
They want the history of the United States taught without accounting for racism. The genocide of the Indigenous peoples and the enslavement of Africans are the basis for the country, but they want to see no part of that reality.
They’ve introduced at this point over four hundred voter suppression measures to further deny access to the ballot of Black and Brown people. Ideally for them, it would seem they’d like to emulate as much as possible, the time when only Whites were allowed a vote.

With their gerrymandering, redistricting and voter suppression, they are waging war on all fronts, as they see the demographic change happening and they are frightened that Whites will no longer be in total control and it is freaking them out.
It is obvious that what they want is an ignorant White population ruling over Black and Brown people and they are getting closer and closer to that goal and are fighting for it with a furious nature.
They insist that every election they lose is the result of voter fraud and is therefore invalid. And they are already passing laws allowing the will of the people to be overridden by legislative bodies that they control.
The Republican party is controlled by the worst among us, the so-called “base” of the party, many descendants of the plantation owners and overseers who had dominion over the enslaved Africans.
On January 6th, they staged an insurrection that they hoped would install Donald Trump as president, so that Whites could once again reign supreme.
It will take a massive pushback against their single-minded attempt to wrest control of government from the influence of the masses of White, Black and Brown people who want to answer in the affirmative, Rodney King, whose beating by the police sparked riots in 1991 and who asked, “Can’t we all just get along?”
The Republican party does not want to “get along,” they want to rule. And if they are not stopped, they will rule and they nation we leave to our heirs will be vastly different from the Promise Land that Rev. Martin Luther King, Jr. saw in his speech to the Atlanta garbage workers, the day before his assassination.
This is the most dangerous racial period the country has been in since the Civil War, and it will take people of all colors, working together, to prevent that descent into the authoritarian control that is the Republican end game.