Recording the Legacy of a Community Activist Mother
Advertisement 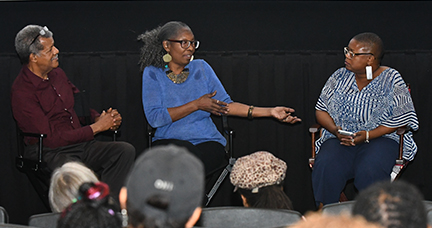 For over 20 years, Bernice Green traveled around the US and Europe as the first Black publicist at CBS Entertainment and News promoting stories of fiction and fact. During her tenure as the network’s senior publicist from the 1970s through the 1990s, Green was a go-to for crisis communications and handling challenging stars. She was assigned to direct publicity on over 125 shows from Sixty Minutes, 911,Tony Awards and the Grammy Awards to Murphy Brown with Candice Bergen, Alex Haley’s Queen with Halle Berry and  Monte Carlo with Joan Collins. Advising and managing the images of these world famous, outspoken women was second nature to her. Bernice was the eldest daughter of renowned Bed Stuy community activist Jane Witherspoon Green and was raised in the shadow of her dynamic mother and family friend Shirley Chisholm.

At the closing day of the 20th Anniversary Reel Sisters of the Diaspora Film Festival & Lecture Series, Green’s documentary homage to her mother And Call Her Blessed: A Portrait of Janie was showcased at the Magic Johnson Theatre in Harlem. Moikgantsi Kgama, founder of ImageNation Cinema Foundation moderated a conversation with Green and her husband David Greaves, the producers of the film and publishers of Our Time Press. The short documentary profiles Jane Lee Weatherspoon Green (1925-2013), a Bedford Stuyvesant grassroots activist, whose passionate voice was a major force in shaping anti-poverty programs and community self-empowerment for four decades in Brooklyn. The film captures the grit, wit and fire of the late mother of 16, who grew up in Jim Crow Georgia, but became part of the Great Migration and raised her family in Brooklyn.

Outspoken about the needs of Bed Stuy, she became the creator and founder of the long-time Eleanor Roosevelt Education Outreach program; former Board member of Brooklyn Congress of Racial Equality (CORE), Bedford Stuyvesant Youth-in-Action (YIA) and Brooklyn’s Community Board 3. The film showcases a woman who not only met with Jackie Onassis and Robert Kennedy, but who was a community powerbroker and advisor to Brooklyn’s political leadership from Congress and City Hall to Borough Presidents and District Attorneys.

“After decades of traveling the country to capture human interest stories for CBS, it seemed a natural to document Janie. I approached her as a community personality, not as my mother,” explained Green. “During the editing of the film, I became aware of my responsibility to the world and to her progeny to create a document about a woman whose value to the community and Brooklyn was beyond measure.”

Playwright J. E. Franklin
“How much richer
our lives would have been
if we’d had an opportunity to record
their stories, as we can today.”

To award-winning playwright Je Franklin, who penned the classic play Black Girl, And Call Her Blessed: A Portrait of Janie is part of the historic legacy of Black women speaking out for social change and retelling the story for the next generation. But, Franklin stresses, in the 21st Century, there’s an urgency for visually recording these histories.

“The women role models were our grandmothers, the Obeah women and our teachers.  Because white terrorism was a daily reality, any form of activism had to be covert. Our records of their lives are stored in diaries or in stories pulled from our memories.  How much richer our lives would have been if we’d had an opportunity to record their stories, as we can today.” said Franklin. “Today’s young activists have been pleading with elder activists for generations to talk to them and give testimony. It’s past time for them to get their cameras and interview more “Miss Janies.”They have to get the testimony as if all our life depended on it.  Because it does!”

Already, Green’s daughter Joanna Williams and 9 year-old granddaughter Chelsea are collaborating on a documentary film about her legacy. Last year, Chelsye wrote and directed an award-winning student film. Green’s mother was blessed to see her daughter using communications skills to be at the forefront of social change. As former Director of PR at UniWorld Group, Green headed Microsoft’s first multicultural campaign for Bill Gates and the massive multi-year NYC African Burial Ground Campaign for the Schomburg, which included personally escorting Sidney Poitier on a tour of the historic opening.

Legacy is so integral to Green’s career mission that she launched the communications consulting firm Legacy Communications. And Call Her Blessed: A Portrait of Janie is part of that legacy. The film has earned accolades, including an American Women in Radio & Television Award. “My goal was to create a living document of a woman that people, including myself, would say ‘Wish I could have met her,’” said Green. “The great Ruby Dee viewed “Janie” and thru a note, to both me and Dave, expressed an interest in “Janie” as a character. Imagine if Ruby Dee played Janie!”

“The Old Settler” Weaves Together Sisterhood, Love and Race in One Magnificent Play