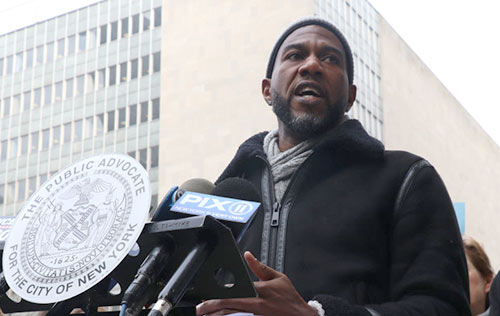 “Anti-Semitism needs to be addressed — it’s been on the rise for the past year or two, it’s horrible — bail reform has been around for six days.”
– Public Advocate Jumaane Williams

State Assemblyman Simcha Eichenstein, whose district covers Borough Park and Midwood, just introduced legislation to amend the new law, seeking to give judges the power to decide if people charged with committing hate crimes should be required to pay bail, as a deterrent.
But the Public Advocate pointed out that the new law regarding misdemeanors was designed to protect the poor, whereas changes would allow those with money to bypass jail time. He cited the cases of Harvey Weinstein and Kalief Browder as examples.
“Harvey Weinstein arrived for his trial today under his own power, while Kalief couldn’t afford to go home,” Jumaane Williams said.
Browder, 16 at the time of his arrest for a stealing a backpack (a charge which was never substantiated) committed suicide after being imprisoned for three years because his family lacked $3,000 for a bail bond. Harvey Weinstein, on the other hand, has not spent a night in jail, after posting his $2 million bail.
Akeem Browder, Kalief’s brother was present outside the courthouse and said, “It’s not fair what happens when people are poor. It’s disgusting how the celebrities or those with money can be treated with privilege.”
The new law, barely a week old, requires that bail be set only for misdemeanors violating orders of protection or for sex crimes at that level. Non-violent felonies are also under the umbrella of the new law, which also does away with most pretrial detention. Domestic violence crimes, crimes against children, conspiracy to commit murder, witness-tampering and “terror” cases are also excluded.
Governor Cuomo, who backed the new reforms, now says, through an aide, that he would support allowing hate crimes to be an exception at the discretion of a judge. Rich Azzopardi, a senior adviser to Cuomo, said in a statement: “The system’s reforms are no doubt a work in progress which we will be discussing this session.”
But some Jewish groups have formed a coalition in support of the new bail reforms. Jews for Racial and Economic Justice, Truah: The Rabbinic Call for Human Rights, and Bend the Arc. They released a joint statement saying the reform aimed to correct “a justice system that criminalizes poverty and perpetuates racial injustice.”
Taking an opposing position is Anti-Defamation League CEO Jonathan Greenblatt. He says he supports judges having the discretion to revoke bail or not for hate crimes, but that he also supports bail reform.
“I believe in criminal justice reform,” he said, “and when a 12-year-old jumps a turnstile or a 15-year-old shoplifts a pack of chewing gum from the bodega, I don’t think they should have to post hundreds of dollars of bail. But when you assault someone in the places where they pray, on the streets where they live, in the homes where they celebrate, bail should be on the table.”
Other lawmakers are reportedly considering using this tense period to add more crimes to the list of those for which the no-cash-bail law would not apply. Public Advocate Williams sees this as unconscionable.
“To see people using the fear of anti-Semitism to deal with bail reform is disgusting!” said Williams.

Velmanette Steps Down, Passes Torch to Wright for Senate Seat