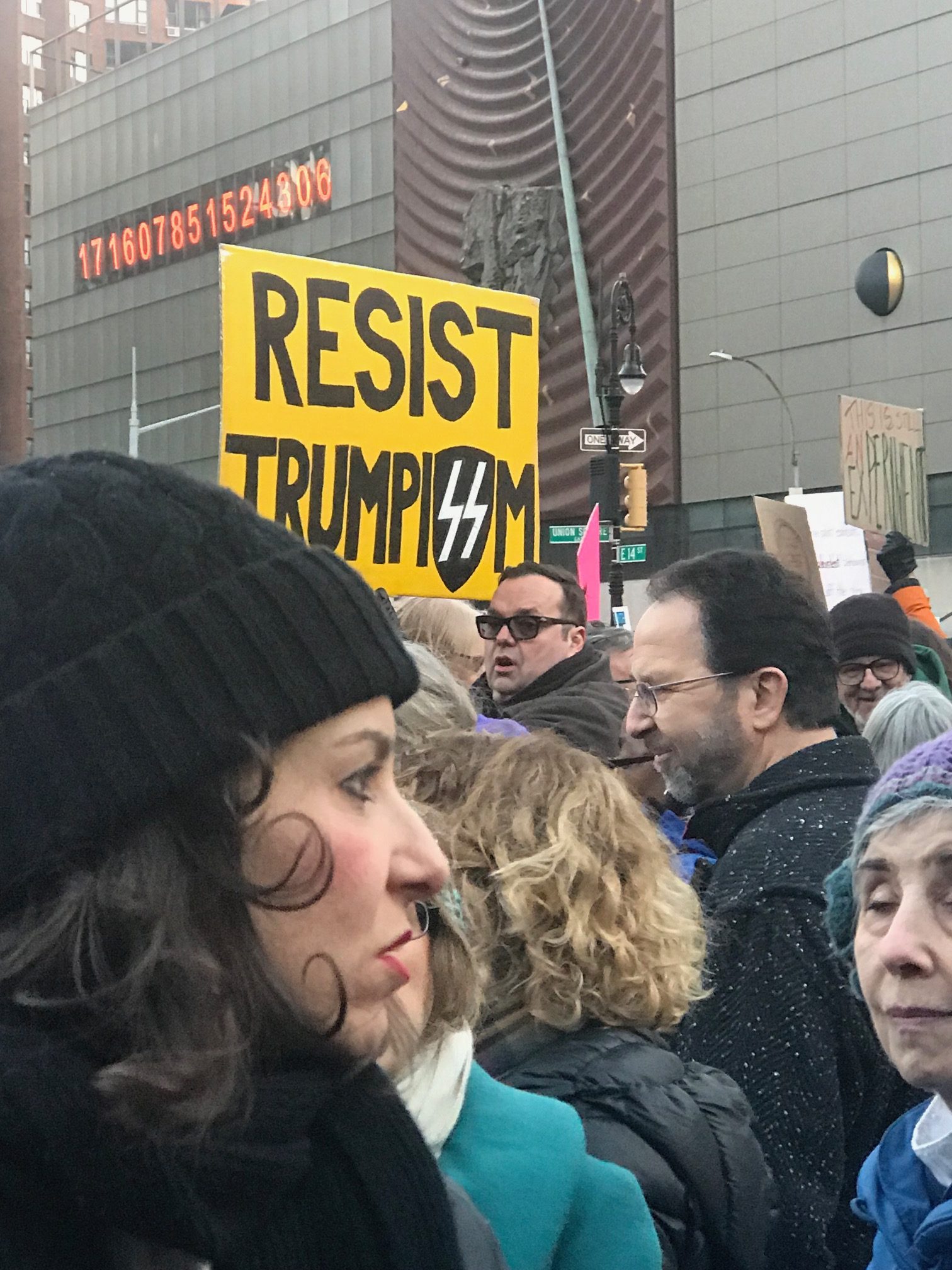 On Presidents Day in Union Square Park, a big crowd of New Yorkers joined citizens across the nation in observing the holiday by broadcasting their feelings about the president and his administration’s policies. The park’s plaza in front of the steps, a familiar protest site, may not have held so many people since Trayvon Martin’s parents joined demonstrators after his murder. People were there to express their outrage over Donald Trump’s calling for a state of emergency because his border wall vanity project was not funded. Neither were they pleased with his plans to get the money without government approval.

Mick Mulvaney, acting White House Chief of Staff said last week, “We should have sufficient money this year,” to fund the 234 miles of wall Trump says will cost $5.7 billion. Declaring an emergency is the tool Trump says he’ll use to redirect $3.5 billion from the Defense Department’s approved construction budget because the projects it had lined up “didn’t sound too important to me” said Trump. The redirection of $2.5 billion from the Department’s drug-battling war chest and $600 million from the drug forfeiture program at the Treasury Department would be accomplished under the executive authority he enjoyed prior to declaring the emergency.

Thus far, the 16 states that have signed onto a lawsuit against the president are, California, Colorado, Connecticut, Delaware, Hawaii, Illinois, Maine, Maryland, Michigan, Minnesota, Nevada, New Jersey, New Mexico, New York, Oregon and Virginia. California Attorney General Xavier Becerra led the lawsuit. Only two are border states, but the others voice concerns over the ethics of this policy and about the loss of monies in the budget earmarked for state-improvements and other funding.

“Today on President’s Day, we take President Donald Trump to court to block his misuse of presidential power,” said Becerra. “We’re suing President Trump to stop him from unilaterally robbing taxpayer funds lawfully set aside by Congress for the people of our states. For most of us, the Office of the Presidency is not a place for theatre.”

Also suing the president are Public Citizen, acting on behalf of a Texas wildlife preservation group, the Frontera Audubon Society and three Texans whose properties have been identified as future border wall construction sites.

New York has already filed recent suits against Trump on behalf of victims of his charitable foundation.

About this new suit, Letitia James said, “We’ve joined 15 AGs in filing a lawsuit challenging President Trump’s declaration of a national emergency and his attempt to divert funding appropriated by Congress for other purposes. Declaring a National Emergency when one does not exist is immoral and illegal.”

And of course, Trump did not help his case when he said that he knew he didn’t really need to declare a state of emergency at this time, leading his critics to point out that if one has the option to take an action now or later, it’s not an emergency.

Meanwhile at the park, protestors enthusiastically belted the lyrics of 16 songs from “Sing Out Louise,” a local protest group founded initially by Broadway performers. The songs were printed in a handout distributed to the crowd. Here are snippets of a few they enjoyed, “Shutdown,” to the tune of the old Petula Clarke hit, “Downtown,” “Favorite Things” from The Sound of Music hit, “My Favorite Things” and “Battle Him,” from “The Battle Hymn of the Republic.”

“When you’re a louse in your lonely White House, you can always try — A Shutdown!

When you’ve got worries, Democrats in a hurry, to expose the lie… Shutdown!

Just rant about the border and invent a phony crisis! Say that scary Mexicans are selling drugs to ISIS.

“Building a wall between churches and Congress

Making a choice between rightness and wrongness

These are a few of our favorite things.”

With a slew of lies he mobilized the moron and the chump.

The country drank the Kool-aid down and landed on its rump,

But we are marching on…”

And a good protesting time was had by all.