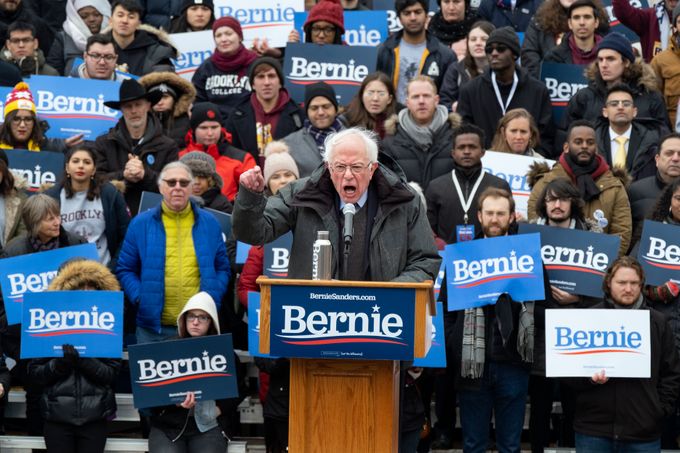 Leftovers taste even better the next day. That lasagna you made for Sunday dinner–It tastes even better when you eat it at your desk for lunch on Monday. I think this is because the food has a whole night to sit in its own juices and flavors, giving it an even more robust taste the day after. Just my opinion. Leftovers definitely taste better the next day, though.

However, this only applies to food. In politics, it’s a different story altogether.

Bernie Sanders came to Brooklyn College this past week to announce that he would be seeking the Democratic nomination for the Office of President of the United States. He grew up a stone’s-throw away from the campus, and he even attended Brooklyn College for a year in the late 50’s. Sanders could have announced this campaign in the same state that he announced his first campaign back in 2016, in Vermont where he’s a senior senator, but he didn’t. Instead, he chose Brooklyn.

It’s customary for candidates to announce their campaigns in either Iowa or New Hampshire, the first two primary states, or in their home state. Sanders coming to Brooklyn for his announcement was a strategy in both optics and perception. Announcing in one of the strongest Democratic cities in the country means that Sanders was assured of a large turnout. Kamala Harris announced her campaign in front of 20,000 people in Oakland last month. In 2016, Sanders pulled less than 6,000 people when he announced his campaign in Burlington, Vermont. More than just the numbers though, this time around Sanders was equally assured that there would be more Brown and Black faces making up a large percentage of the crowd. Midwood, Brooklyn makes Burlington, Vermont look like Oslo, Norway, minus all of the real cool architecture. I’m sure that Team Sanders had a photog in the midst getting the money shot for the campaign flyers. Nothing says diversity like a white man on a podium talking to a sea of colored folk.

Sanders joins an underwhelming group of Democrats vying for the opportunity to battle Donald J. Trump in the fall of 2020. You have notable names like Kamala, Booker and Castro. You have names no one has ever heard of before like John Hickenlooper and Jay Inslee. And then you have names that haven’t entered the race, but people are hoping that they will, like Beto, Bloomberg and Biden. For now, though, the assumption is that Sanders entering into the race automatically makes him the front-runner. It was just a few years ago when Sanders was the cerebral man’s choice for the Democratic nomination. Back in 2016, he focused his campaign on income and wealth inequality. He talked about the erosion of the middle class. He talked more taxes on the wealthy. He pitched his tent among the people and the issues that concern the working class the most. At the end of it all, he had done his part to reenergize the party, but he could only muster 46% of the delegation vote, losing to Hillary Clinton.

But now he’s back, like your favorite pair of jeans that you thought you’d have to throw out because you got a hole in the crotch area, but your mom was able to patch it up. He is trying to pick up where he left off, for the people. However, this time around it tastes just a little different. The Brooklyn move was cute, but it plays as a bit contrived. When answering this sudden hot-button question about whether or not descendants of African slaves should receive reparations, his answer amounted to a no. Kamala, Booker and Elizabeth Warren all answered the same question with a yes. If Sanders should happen to win the primary and then the general election, he would be 79 years old on the day he takes office. That’s 6 years older than Reagan was when he was elected to a second term. In a millennial world, do we trust the abilities of an 80-year-old president to be able to keep up with the ever-increasing flow of information?

We are only at the beginning of this campaign season, but it already feels like the fresh ideas that Sanders delivered in 2016 are now nothing more than leftovers, pulled from the back of the fridge, the aluminum foil taken from the top and the bowl put in the microwave to heat it up. Leftovers taste great the day after. But after three years, you might want to think twice before eating them.

Protesting the President on President’s Day