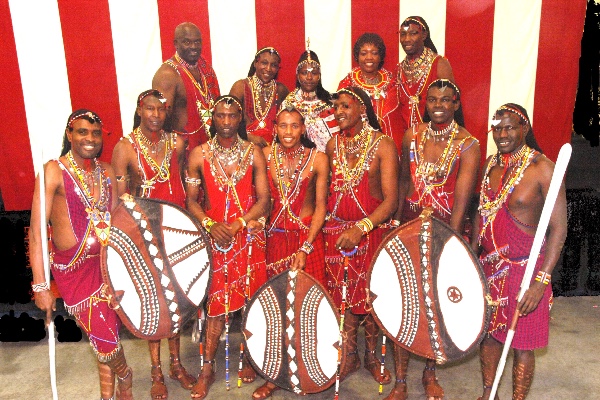 President Donald Trump’s Muslim travel ban has created a visa nightmare far more widely than the seven targeted countries listed on his executive order. Performing arts and cultural groups who have been invited by U.S. cultural organizations are experiencing a high rate of rejection for visa entries into the U.S. In many cases, an explanation or reason is never given for the rejection.

Since March, the Bedford-Stuyvesant Museum of African Art (BSMAA) has been coordinating with Nicholas Sironka, who is a Maasai artist from Kenya and who is currently living in Washington State, will be bringing six Maasai dancers from Kenya to perform at BSMAA’s Fourth Annual Nelson Mandela Humanitarian Award event. The event will be held on October 14, 2017 at the Brooklyn Museum.

“Homeland Security has sent the visa paperwork back to me for the second time last week always claiming that I have not included requested documents. The first time it was sent back I was told that a form for one of the dancers was missing,” Executive Director of BSMAA Vira Lynn Jones said. “Nicholas was confident that Homeland Security would approve the application so that the dancers would be invited for the crucial U.S. State Department interview in Kenya.”

The Friends of Nicholas Sironka Dance Troupe have traveled to the U.S. since 2002. The last time the group performed was on the West Coast was in 2012. “Nicholas was very confident that the group would get their visas without any problem,” said Vira. “I basically followed all guidelines that he provided me from previous paperwork that had been submitted successfully over the years and the visas were always granted.”

Last week, Homeland Security returned the paperwork to BSMAA for the second time. “The government agency claimed that the performance contract for the dancers was missing. It also wanted more information about BSMAA, where the group was performing, at what venue and what they were going to be paid,” said Vira. “Why didn’t they ask for this information the last time the documents were returned. Nicholas told me this information was never requested in the past. I feel that time is running out for us. The Maasai dancers have been practicing since early March. Periodically, they have been sending me Facebook videos of them practicing. We will all be devastated if the visas are denied.”

In July, visas were denied to an all-girls robotic-building team from Afghanistan. They had been invited to an international robotics competition in Washington, D.C. While no explanation was ever given for the rejection, the State Department reversed its decision once the team’s ordeal was reported in the international media. On July 6 of this year, five teenagers from a robotics team from the small West African country of Gambia were initially denied visas to attend the same event. After Al-Jazeera reported their ordeal, the decision was reversed.

According to data compiled between 2015-2016 by the New York Times from the U.S. State Department records, the information showed that Somalia, Ghana, Liberia, Guinea-Bissau and Mauritania, all African countries, had a visa denial rate of more than 60 percent.

Vira has been encouraged to seek help from local politicians who represent Bedford-Stuyvesant, the area where BSMAA is located. Vira is weary that not an ounce of support was materialized. “I have already asked Assemblyman Walter Mosley’s office for a letter of support to the South African-based Nelson Mandela Foundation. His chief of staff told me that Assemblyman Mosley’s office was not currently providing support letters. When I asked the individual to explain the reason, the individual told me there was no reason. And that ‘he just was not writing any letters at this time’.”

Since New York City Council member Robert Cornegy represents Bedford-Stuyvesant, Vira has been encouraged to reach out to his office. “Are you kidding is my response to people who suggest that I reach out to his office. His chief of staff never returns my calls.” When Vira was told to seek Borough President Eric Adams, she shook her head and said, “I had an event there in 2014 and the staff was so hateful and screaming at the BSMAA staff that I have never been back there”.

“I am trying to create a world-class cultural arts organization for the community in Bedford-Stuyvesant. I have gotten very little support even from U.S. Congressman Hakeem Jeffries, who once said he would do everything in his power to help the museum succeed.”

Vira feels that maybe they have the same defeatist attitude that the former Borough President Marty Markowitz displayed during a meeting he had with Vira while his staff was present back in 2013. Vira recalled him saying that she was wasting her time trying to create an African art museum.

“He told me didn’t I realize that the demographics were changing in Bedford-Stuyvesant,” she said. “Of course, I was very insulted because he was saying the area is being gentrified and an African art museum would not be feasible.”

“I was very diplomatic. I explained to Marty that I had traveled all over Europe and that some of the most incredible African art collections were in European museums,” she said. “The entire world loves African and they will be visiting Brooklyn to enjoy BSMAA’s exhibits.”

“All I can hope for now is that BSMAA will be successful in obtaining visas for the dance troupe,” she said. “Please wish me luck.”

OpEd: WHY DO THEY KEEP KNOCKING ON OUR DOORS?