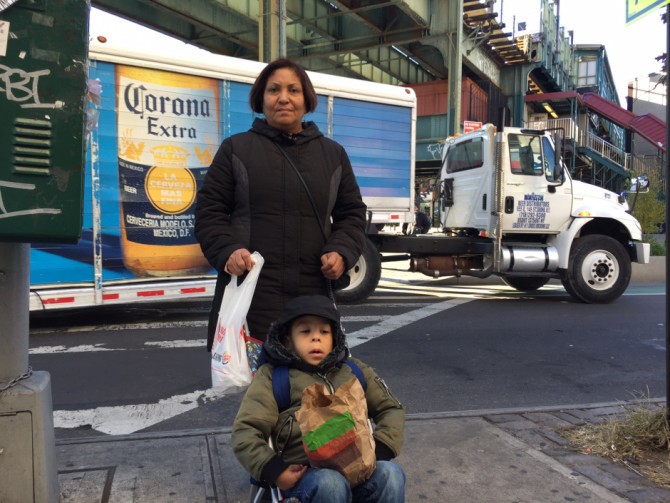 They are invisible and they cannot be felt, but the minuscule particles of contaminated air blowing through the streets of the Big Apple, which we breathe every day, are causing hundreds of New Yorkers to die prematurely every year. The most affected are poor people and minorities.

This was revealed by the New York City Department of Health and Mental Hygiene (DOHMH) as it divulged the results of a study it carried out to analyze the impact on public health of pollution caused by vehicular traffic and other sources of contamination.

According to the report, some 320 people lose their lives prematurely every year in the city, and another 870 are hospitalized or treated in emergency rooms due to exposure to motor vehicle emissions of fine particulate matter, known as PM2.5, which may cause cardiovascular and respiratory disease such as asthma, pulmonary deficiency, brain hemorrhage and heart failure.

As explained in the DOHMH report, PM2.5 – airborne solid and liquid particles measuring less than 2.5 microns in diameter – is the most harmful urban air pollutant, and it is small enough to penetrate deep into the lungs and enter the blood stream. Prolonged exposure to this type of particle through breathing may cause irreversible damage to respiratory and cardiovascular health and contribute to an increased risk of early death.

An online interactive infographic published by the DOHMH shows that the areas with highest poverty levels are the most affected by the constant exposure to this pollution when compared to richer neighborhoods, which causes their residents to suffer the strongest negative impact on their health.

According to the analysis, the poorest neighborhoods in the Big Apple experience 1.7 times more exposure to PM2.5 and their rate of hospital visits due to asthma is 9.3 times higher because of truck and bus emissions. Among these areas, neighborhoods with a large Latino population stand out, including the South Bronx, East Harlem and the Lower East Side in Manhattan, and Williamsburg and Bushwick in Brooklyn, where more than 30 percent of all residents live under the federal poverty level, according to the DOHMH report.

“Here, the environment is overloaded because many trucks and buses pass by constantly. Also, there are a lot of people and construction. (…) We are oversaturated,” complained Belkis Rodríguez, a Dominican woman who has lived in the Bushwick neighborhood in Brooklyn for 19 years.

“This pollution affects children greatly. I have neighbors who have had to obtain medicine for their children because they are asthmatic,” added Rodríguez as she pushed her four year old grandson in a stroller at the congested intersection of Knickerbocker, Greene and Myrtle avenues.

Nearby, also pushing a stroller, Mexican-born Catalina Huerta said she was worried about the health of the area’s children.

“You can feel the pollution in the air. There is a lot of smog because of the trucks and, when you breathe, you can feel that the air is not clean,” said the Puebla native, who has lived in Bushwick for 10 years.

As the report “Brooklyn Community Health Report on Asthma” from SUNY Downstate Medical Center shows, several Brooklyn neighborhoods, particularly three of them – Bedford-Stuyvesant/Crown Heights, East New York and Williamsburg/Bushwick – located in the borough’s central northern area, have higher rates of emergency visits and hospitalizations for asthma than the rest of the state and the New York City average. Hispanic and African-American children under 5 years of age and older adults over 65 are the most affected.

While there are many sources of PM2.5 particles in the city, the DOHMH analysis determined that trucks and buses circulating on New York streets are the main culprits for the health issues associated with traffic-related air pollution affecting New Yorkers.

“Many trucks making deliveries pass through here. When they are left idling, especially in the winter, you can see that there is smoke coming out of the exhaust because those machines use diesel, and I think they should do something to prevent that, because it causes allergies and frequent colds,” said Roque Vivar, an Ecuadorean worker who has lived in the area for 17 years.

What is being done?

In April 2015, the Bill de Blasio administration published a report entitled “OneNYC” (nyc.gov/onenyc), which details a comprehensive plan to be followed by a number of municipal agencies to reach the goal of an 80 percent cut in greenhouse gas emissions by 2050. The ambitious initiative seeks to reduce inequities in negative health outcomes from pollution exposure. These efforts include expanding programs to retrofit and replace the most polluting trucks on New York City streets, expanding the use of renewable fuels where available, and studying the potential for “low-emission zones” that use regulation or pricing to restrict the most polluting vehicles in the city.

The DOHMH report states that there have been recent improvements in PM2.5 levels due to the actions taken by the city. The “New York City Community Air Survey” found that, between 2008 and 2014, annual average PM2.5 levels declined by 16 percent, a drop caused in part by a reduction in emissions from city buildings.

This past February, the de Blasio administration and the Department of Environmental Protection announced that all 5,300 buildings that registered in 2011 as burning #6 heating oil – a high-polluting fuel – had converted to a cleaner fuel as of Dec. 31, 2015, greatly reducing building emissions of sulfur dioxide and fine particles that contribute to premature deaths and hospital admissions from cardiovascular and lung disease.

In September 2015, the mayor launched the NYC Retrofit Accelerator initiative, which provides free technical assistance and advisory services for building owners to “go green” by upgrading to clean energy. The program will prioritize assistance to buildings in high-poverty neighborhoods that are still using more polluting types of heating oil.

Advertisement
Related Topics:DOHMHHealthcarePollution
Up Next