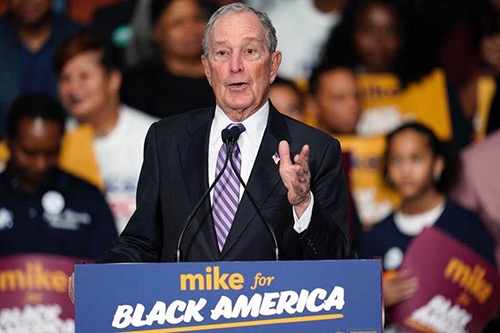 One of my favorite novels of all time is the book 1984, a profound story about a bleakly dystopian society governed by propaganda, surveillance and censorship. The purpose of the book was to show the reader the horrible possibilities of totalitarianism through the eyes of Winston Smith, a man who is problematic because of his ability to think and to reason. This book is one of the most influential books of the 20th century, cogent in its description of the manipulative power of government and the media, pessimistic in its view of what our future holds.

Every once in a while, something will happen as it pertains to the government and it will remind me of that book. This week’s reminder was the radio ads funded by the campaign for Mike Bloomberg for President.

In 2005, I became a victim of stop-and-frisk. It was in January, the Tuesday after MLK Day, I remember because it was my first day back to work after a three-day weekend in the Poconos. I had just gotten home from work and I decided that I was going to make tacos for dinner. I had everything in the house except for the taco shells so I put my coat back on to head to the supermarket. When I got to the corner of Lincoln and Albany, a friend of mine was coming out of the bodega. We stood there for a few minutes just talking. I looked up and a cop car was crossing the light. It stopped right in front of us.

There’s this second right before they hop out when you know they are about to hop out, so I knew they were about to hop out on us. Still, when they did, it was unnerving. Even though it was only a little after 6pm, it was dark. I had this huge coat on. I’m with my friend and I know he can be a hothead. I just wanted to get taco shells for dinner and now I got two cops approaching me. Not a good feeling. They asked us what we were doing. My man said we weren’t doing anything, I told them I was headed to the store. The other cop said, “Up against the wall.” It was so cliche. I was about to say something like, What for? We haven’t done anything wrong. But my friend simply turned around and put his hands against the wall of the building we were in front of. So, I did the same. They searched both of us and then the cliched cop said, “Get off the block, now.” By the time I turned around, they were already back in their car, driving away. My guy must’ve read my expression because he shook his head and said, “Don’t worry about that. They do it all the time.” I gave him a pound and kept it moving towards the supermarket. I remember being frightened that they’d see me walking back home and stop me again.
Stop-and-Frisk was the NYPD policy of searching, questioning and even temporarily detaining civilians if there was a “suspicion of danger.” In the same year that my friend and I were stopped, 398,189 other people were also stopped and frisked. Bloomberg was the mayor during my stop-and-frisk experience, and during his tenure as mayor, 5,081,689 stop-and-frisk stops were recorded by the NYPD. Almost 90% of those stops were Black and Brown boys, guys like me and my friend. Those are actual numbers.

In 2015, at the Aspen Institute, Bloomberg defended the policy by alluding that stop-and-frisk was responsible for lower murder rates. He said, “Ninety-five percent of murders, murderers and murder victims fit one M.O. You can just take a description, Xerox it and pass it out to all the cops. They are male minorities, 16 to 25. That’s true in New York, that’s true in virtually every city.”
This week, I was driving my kids to get something to eat and a Bloomberg ad came on the radio. In the ad, Bloomberg says something to the effect of he knows that if he was Black, he would’ve had a harder time in life due to institutional racism. It was the biggest and most accurate example of doublespeak I’ve seen in real life. The man whose policies were responsible for the inhumane treatment of Black and Brown men and women over 5 million times, a policy that he defended just five years ago, this same man has paid millions of dollars for radio ads explaining that he fully understands the effect of institutional racism on the Black community.

I suggest that before Election Day 2020, everyone read the novel 1984. We haven’t seen this level of government and media manipulation since Orwell wrote about it.

How Do We Love Our Boys?

Who Taught You Cancel Culture?