Only Massive Voting Can Save Us
Advertisement 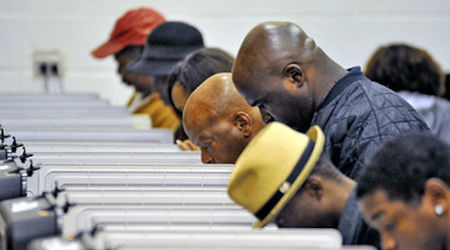 Nothing left to say about President Trump. Even though I loathe the man, his surrender to Russian President Vladimir Putin, in his best “Yassa Massa” way, still hurts.

We have an emotionally unstable, frightened and traitorous man as President of the United States, and he will be kept in power by the 87% approval rating he has among Republican voters. These voters have no problem with Putin, a brutal white guy who orders assassinations, invades countries and is the kind of strong man they admire.

These faithful Republican voters have been gerrymandered into and around districts, “surgically drawn” in their favor, and will vote out any representatives who stand against Trump. And despite their expressed outrage and threats about “it better not happen in 2018”, there is a lingering suspicion that the legislators secretly have little motivation to actually act. With Russia’s help, they will keep the Senate, cut their midterm losses, and if the Russians really do their job, shock the country again by picking up a few seats in the House.   This will allow them to keep their jobs, complete their repurposing of the judiciary to maintain “white rule” by making more lifetime appointments, while at the same time encouraging White nationalists around the world to rally to the newest strongman on their behalf. More tax dollars will be funneled to the top, leaving the masses of people more serf-like and obedient. Just as the oligarchs in Russia and the U.S., like them.

As Republicans contemplate the possibilities of another rigged election and giving Trump another 4 years and another Supreme Court appointment, then the white supremacists, with the help of Russian oligarchs, will have completed the takeover of the U.S.; and like a thing from the dead, the South that fought the Civil War, has risen.

We need to stop insisting that the United States is the strongest nation on earth. Lumbering around with billion-dollar nuclear subs and carriers, their ordinance is a laughable match against a dedicated cyberattack that is far more devastating to national security than the never-to-end conflict in the Middle East.  This is the warfare of 2018 and we’d better start inflicting some pain. But there will be no pain coming in the cyber world because we have a traitor as president.

This is real, this is happening, this is now! Everyone has to vote as though the country depends on it.

View From Here: Our Strength is in Our Vote