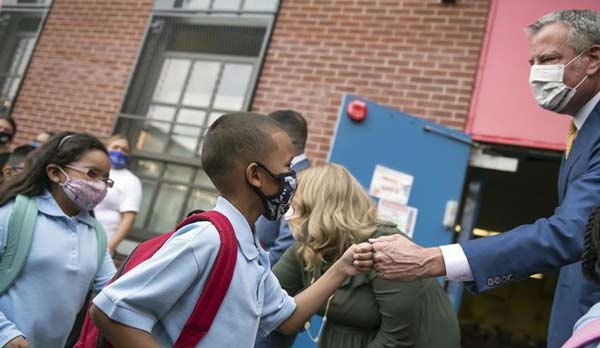 by Jessica Gould, WNYC
Mayor de Blasio has announced some revised testing and quarantine protocols for the city’s public schools, which will go into effect next Monday. Sample COVID-19 testing of unvaccinated students will now happen weekly, rather than twice-a-month at all elementary, middle, and high schools. This comes a day after the city’s teachers’ union, the United Federation of Teachers, called for weekly testing.

Epidemiologists had also urged weekly testing ahead of school starting. But families may opt out of consenting, and scientists have said this will provide a less accurate picture than if all unvaccinated individuals were tested. Last year, students had to consent to testing, but if they did not, there was a consequence: they could be sent back to remote learning.

Pre-k and kindergarten students are exempt from testing.
In another significant shift, the city is changing its quarantine policy for unvaccinated students. Previously, the education department had said all unvaccinated and asymptomatic students in a classroom with a positive case would have to quarantine for 10 days, although older students could provide a negative test result to return to school on day 7. Now, unvaccinated students will not have to quarantine when there is a positive case in the class unless they were unmasked and less than three feet apart. The new rule reflects guidance on school quarantines from the Centers for Disease Control and Prevention.

“Now that the first week is behind us, we are able to evaluate and make changes based on what we’re seeing on the ground,” an education department spokesperson said. “Our original testing policy was the base, and we could always scale up. And this update to quarantine in alignment with the CDC will help to keep our school communities whole, and safely ensure our students that should be in their classrooms learning are there.”

The new protocols are scheduled to go into effect on September 27th, the date by which all school employees are required to have at least one dose of the vaccine. However, a coalition of unions has challenged the vaccine mandate, and a judge placed a temporary restraining order on the requirement for school staff pending a hearing on Wednesday.

Already, 441 public school classrooms are closed due to positive cases, and another 326 are partially closed, out of a total of 58,666 classrooms across the system. PS 79, a school in East Harlem that serves children with special needs, shuttered over the weekend. At this point, the schools are closed when officials believe there is “widespread transmission”; it is unclear how the city defines that.

Officials said they are hopeful the new quarantine rules will keep more children in school. However, the new carve-out for students wearing masks and spaced three feet apart may also prove to be challenging to enforce, given that students take off masks to eat, and many schools are unable to maintain three feet of social distancing at all times. The city has asked schools to keep three feet apart “where possible,” but as school kicked off last week, photos emerged of kids packed into narrow corridors between classes.

In a statement, United Federation of Teachers president Michael Mulgrew applauded the increased testing, but raised alarms about the new quarantine rules.

“While the CDC guidelines allow an exception to quarantine for some students who have been exposed to the virus, the exception specifically applies to children who have maintained social distance and consistently worn well-fitting masks,” he said. “Maybe in the Mayor’s universe all children keep their distance, wear their masks correctly and leave them on all day, but in the real world of our schools, this just isn’t so, particularly in the many schools that are overcrowded.”

At a press conference Monday, officials said they would be evaluating who needs to quarantine based on their proximity to a positive case, whether they were unmasked, as well as how long they might have been in contact with an infected person.

“That has to happen for a sufficient duration of time for that to be considered a close contact and for that child to quarantine,” said Health Commissioner Dave Chokshi.
“In every case, it will be an individualized decision made in the best interest of the child,” added NYC Health and Hospitals CEO Mitch Katz.

But the head of the city’s principals union, the Council on School Supervisors and Administrators, said administrators are concerned that the city’s “Situation Room” — which is tasked with responding to potential cases — is already becoming overwhelmed.

“We have growing concerns that the Situation Room is not fully prepared or adequately staffed to handle a rise in cases as all staff members and nearly 1 million students return to their school buildings,” said CSA president Mark Cannizzaro.

This article was updated on Monday at 4:20 p.m. with details from Mayor de Blasio’s press conference, as well as reactions to the city’s new policy by the teachers’ and principals’ unions.

National Grid Employees Give Back