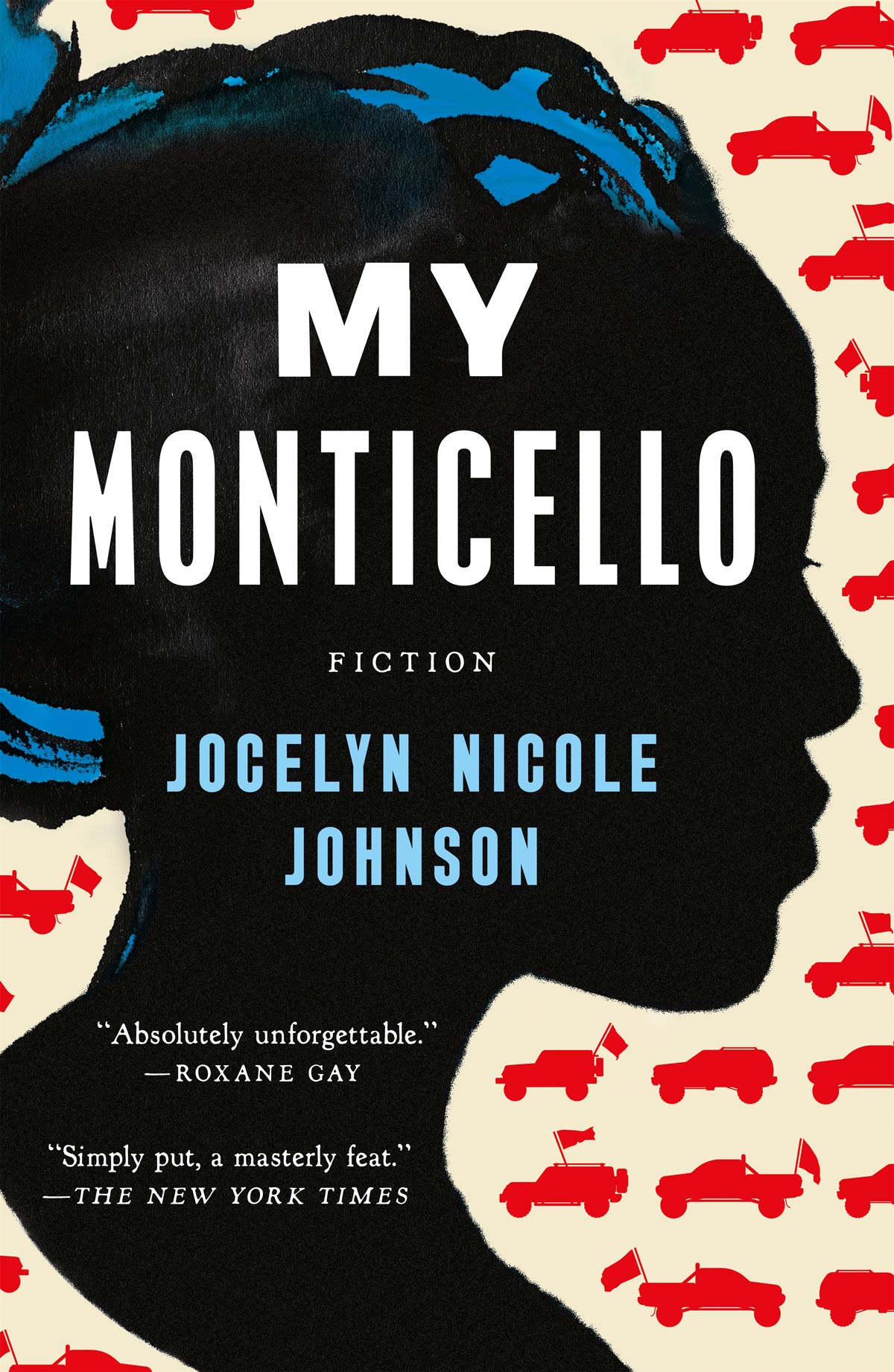 Jocelyn Nicole Johnson’s debut book is My Monticello: Fiction (Henry Holt and Co., 2021). The five stories and a novella all set in Virginia. Johnson has been a fellow at Tin House, Hedgebrook, and VCCA; her writing has appeared, or is forthcoming, in Guernica, The Guardian, Kweli, Joyland, Phoebe, Shenandoah, Prime Number Magazine, and elsewhere. Her short story “Control Negro” was anthologized in Best American Short Stories 2018, guest edited by Roxane Gay, who called it “one hell of a story” and read live by LeVar Burton as part of PRI’s Selected Shorts Series. “My Monticello” is set to receive a film adaptation from Chernin Entertainment for Netflix. A veteran public school art teacher, Johnson lives and writes in Charlottesville, Virginia.

My Monticello, the debut work of fiction by Jocelyn Nicole Johnson, explores the intersection of race, politics, and climate change in our society in creative and bold ways. In a series of five short stories and a novella “My Monticello,” Johnson provides readers with the interior lives of characters who convey abject despair, frustration, grief, and anger as they bear witness to a society that exposes racism, white supremacy, violence, police brutality, and bullying in America. These characters, connected by race and their desire to be fully embraced in this country, represent a society that is unraveling and the complexity of the Black experience in America.

The book opens with “Control Negro,” an incredible and powerful story that was read live by LeVar Burton as part of Symphony Space’s Selected Shorts series. The narrator, a Black academic, decides that his son will serve as the control in an experiment. He hypothesizes that if he conducts research on the characteristics of American Caucasian Males (ACM), he will ensure that his son who is the “Control Negro” will not acquire these characteristics. Believing that his “beloved America” will treat his son fairly because he does not fit the mode of the typical ACM, he insists that his son adheres to certain protocols regarding school, dress, and extra-curricular activities. The reader can probably predict the results of this bizarre experiment. “Control Negro,” the strongest short story in this collection, provides a clear illustration of the psychological effects of racism.
In the “The King of Xandria,” the reader meets a Nigerian man who realizes that his migration to America cannot compensate for the loss of the untimely death of his wife. The story highlights the double-edged sword that many immigrants face as they attempt to adjust to a different society. As the story evolves, Mr. Attah, still in mourning, becomes more despondent when his son is diagnosed as learning disabled. This is a final blow for Attah who has lost his job and is on the verge of losing his home. Johnson’s language aptly conveys Attah’s pain and state of mind. “It is time to fly back. Mr. Attah had realized it then. In truth, he missed home, the quality of congestion even, the fine kicked-up dust. But how could he go back penniless and defeated?”

The short story, “Buying a House Ahead of the Apocalypse,” a critique of society’s failure to establish measures to ensure environmental sustainability, portends a future where the lack of climate control will intensify hurricanes, heatwaves, and flooding, and will inevitably have catastrophic effects on our society. The narrator has a checklist before she buys a home. She states: “scroll down to see how swiftly the Amazon burns; scroll to see how many hundreds of species have been lost or consumed within the last 24 hours; . . . find a house on a hill, with a wide drainage ditch, set back from the road.” There is a strong sense of despair in this story as the narrator recounts how people have already begun to hoard food and stockpile supplies.
Johnson closes her book with “My Monticello,” a novella that represents a dystopian and apocalyptic future. She draws on current and historical events to depict the complexity of the relationships of people from diverse backgrounds, the importance of community, and the rise in white supremacy. White vigilantes have taken over Charlottesville, Virginia, where Monticello, the home of Thomas Jefferson lies. They are burning houses, murdering people, and roaming the streets with rifles and torches. Terrible storms have flooded City Hall. A group of Black, Brown, and White neighbors escapes the violence by gathering in a bus and driving up to the estate of Monticello. The leader of the group is Da’Naisha Love, a young woman who is a descendant from the union of Thomas Jefferson and Sally Hemings. As she witnesses the city’s destruction, she reflects on her life: “My whole life, it seems, there’s been a revival of hatred toward people who look like me.”

The community gathered at Monticello collectively strategize and find ways to take care of their needs for food and shelter. They have one primary goal in mind: resisting the vigilantes. I encourage you to read the novella to learn the outcome of their resistance.
My Monticello is also reminiscent of Octavia Butler’s Parable of the Sower (1993), the post-apocalyptic novel that chronicles the story of Lauren Olamina, a young woman who can feel the pain of others and who leads a group of people from a place of violence and chaos to a place where they can build a life-sustaining community. Like Parable of the Sower, My Monticello contains a message that portends what can happen if racism, violence, and climate change are not addressed. Told from the perspective of a young college student, it is a critical commentary on the racial, political, and sociological state of our society.
View an interview with Dr. Brenda M. Greene and Jocelyn Nicole Johnson at
https://bit.ly/3k46yk3