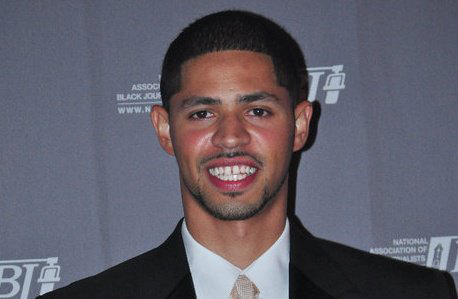 Michael Feeney, seasoned in his field on the level of veteran journalists who’ve spent two or more decades in print, cared for his community, his culture, his craft.

And his work reflected it.

We met him in 2010 during the Schomburg’s celebration of the donation of Maya Angelou’s collection.  Michael covered it for the NY Daily News.  He was 26.  And he was impressive.

We were thrilled when the Daily News selected him to run their Harlem neighborhood beat, and elated with his move to Harlem around that time.

An interview with Khalil Gibran Muhammad, the Schomburg Center director, was the last time we sat with Michael.  We felt privileged sitting in on the conversation between those two brilliant young men.

As with Khalil, we thought of Michael as “our future”.

We are saddened and we will miss Michael Feeney.

Feeney, 32, died Sunday after going into cardiac arrest while being treated for a staph infection in his kidneys, according to an obituary published in The Daily News.

“I am shocked to learn of Michael’s passing. He was a respected leader within NABJ, having served with distinction as chapter president of the New York Association of Black Journalists for years. His leadership led to that chapter receiving the NABJ Chapter of the Year Award,” NABJ President Sarah Glover said. “He was a tenacious journalist who possessed a passion and energy for telling stories reflective of diverse communities — stories which otherwise might not have been told.”

Glover first met Feeney in 2003 at the NABJ Region II Conference in Atlantic City as he traveled with other Delaware State students to their very first NABJ conference. She fondly remembers his ambitious desire to learn the craft and meet working black journalists.

Feeney learned journalism from the best. He was taught by NABJ founder DeWayne Wickham at Delaware State University and was a founding member of the university’s student chapter.

“Michael Feeney was friend, a mentee and a former student of mine whom I admired greatly. He was far more talented than he allowed himself to believe; much more the master of his destiny than he was willing to contemplate,” Wickham said. “He was an immensely talented young black man for whom — like far too many of our young black men — death came way too early. I trust that he is already at work in God’s newsroom.”

“I am heartbroken to hear of Michael’s untimely passing as I have watched him grow from a young inquisitive child into a remarkable man and journalist,” said Allison J. Davis, an NABJ founder. “Michael often thanked me and the late great Reggie Harris for igniting the spark that ultimately became his profession, but it was I who thanked him for making us so proud of his many accomplishments in the industry we so dearly loved. His death is a great loss to journalism, NABJ and to our community of Teaneck, New Jersey, a place he still called home. He will truly be missed by all the lives he touched.”

For five years, Feeney distinguished himself as a versatile reporter at The New York Daily News. Feeney advanced from being a crime reporter to covering Upper Manhattan, which included the Harlem, East Harlem, Washington Heights and Inwood neighborhoods. While excelling as a beat reporter, he also covered entertainment and culture showing an innate ability to shift from hard news to feature reporting.

As a freelancer, Feeney covered the riots in Baltimore following the death of Freddie Gray for NBC BLK. Prior to working for the Daily News, he covered entertainment and culture for The Record in North Jersey and news and entertainment for TheGrio.com. He contributed to EBONY Magazine, including a feature story on actress and HIV/AIDS activist Sheryl Lee Ralph and Hairfinity owner Tymeka Lawrence.

“The New York Association of Black Journalists is saddened by the passing of former President Michael J. Feeney. It is with deep sorrow that we mourn him,” NYABJ President Julie Walker said. “He was a dedicated leader of the organization and an outstanding journalist. Michael, who served four years as president of NYABJ, worked tirelessly furthering our goals and revitalizing the chapter. He was a mentor to so many just starting out as journalists and a constant voice for those working tirelessly in media.”

A proud native of Teaneck, New Jersey, he was a 2005 graduate of Delaware State University. Feeney was a champion of historically black colleges. Upon being honored with NABJ’s Emerging Journalist of the Year Award in 2010, he went on a speaking tour which took him to several HBCU campuses.

“Michael was a gregarious, warm and joyous person,” Glover added. “‘Feeney,’ as he affectionately was known, inspired veteran journalists and aspiring journalists because of his energy, his enthusiasm and his commitment to helping others. He was a little brother to me and so many NABJers.”

An advocacy group established in 1975 in Washington, D.C., NABJ is the largest organization for journalists of color in the nation, and provides career development as well as educational and other support to its members worldwide. For additional information, please visit  www.nabj.org.