Local Activists Cause TD Bank to be Closed on Martin Luther King, Jr. Day “From Maine to Florida”
Advertisement 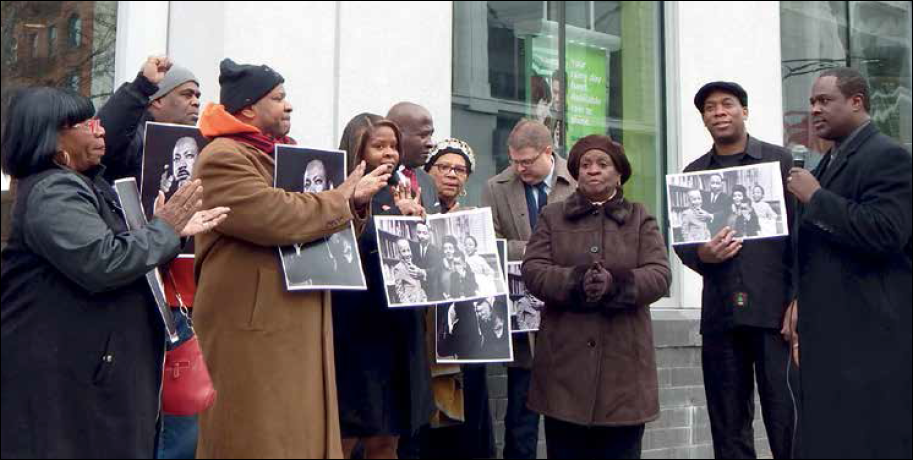 After pressure from Rev. Taharka Robinson and the Bedford-Stuyveant Anti-Violence Coalition, TD Bank has changed its holiday policy and will be closed on MLK’s Birthday. “Almost a year ago, we demonstrated here to tell TD Bank they had to honor Dr. King. And now they will be closing their doors at 1,400 locations from Maine to Florida on Dr. King’s national holiday.”

The assemblywoman said the holiday is not for a day of shopping, but rather, “A day of service for all of us in our communities to celebrate Dr. King in spirit and in truth for the work he did for us. And he deserves to be celebrated by us being in service on that day”.

Bruce Green, president of the Brooklyn Anti-Violence Coalition, called it a “significant” victory when a “giant” with 1,400 locations was brought to change. “This ain’t no lightweight work,” said Green, noting that the coalition founded by Taharka 10 years ago, is still in the struggle in ways large and small for the voiceless in the community.

Ms. Tai Johnson, PA James’ Intergovernmental Affairs Coordinator, read a message of support from the Public Advocate who referenced the time we’re in writing, “Now more than ever, it is so critically important that we take time to reflect on his work and carry out his message. And Dr. King would never allow us to go back down a path of normalizing hate. Thank Rev. Robinson, a true leader, for all his work. He called on TD Bank to recognize Dr. King and stop the funding of gun violence that is ripping our communities apart”.   Geoffrey Davis, citing Rev. Robinson’s work on the Chanel Petro-Nixon case as well as the TD Bank initiative said, “You’re a 21st century hero, that’s what you are”.

Why Are NYC Public Schools Still Separate and Unequal?