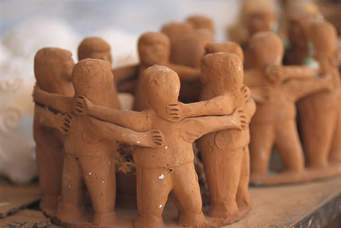 I am currently training to run the NYC Marathon on November 5th. As part of my training, I often run down Bedford Avenue, tracing the actual marathon route into and through Williamsburg. A large portion of the southern end of Williamsburg is home to a very large Hasidic community. On a run I took a couple of weeks ago, while running down Bedford in that community, I witnessed a car accident between two Hasidic men. A white sedan ran the red light heading east, and as he crossed Bedford Avenue, he T-boned a metallic blue minivan. The minivan went into a spin and crashed into the light pole on the corner.

It was around 7am. The block was quiet, and I was less than half a block away when the crash happened, so I reached the crash site first. When I approached, the man in the white sedan was already slowly getting out of his vehicle. The minivan’s air bags had deployed. The driver in the minivan was dazed, trying to move the air bag aside to reach the door. I grabbed at the door and pulled it. It was unlocked, so it opened without problem. The guy sort of rolled out of the minivan and onto the ground. He seemed shaken by the crash but he didn’t have any visible injuries.

Instinctively, I asked, “Are you okay?” He didn’t answer, but realizing that he was on the ground, he reached at me with his hand, motioning for me to help him up. Once on his feet, the man went to surveying his minivan. It was totaled. Wanting to help, but not really knowing how, I asked, “Do you want me to call the police?” He turned to me, and the only thing he said to me was, “Thank you but I don’t need you to call the police. We will take care of this ourselves”.

The guy that was in the sedan came over to the man I helped out of the minivan. He apologized profusely to the man in English, and then they began to talk in their native tongue, both seeming to ignore my offer of assistance. Resigned with the notion that they were okay, I continued my run.

The conversation though, or rather the lack thereof, stuck with me for my entire run. Two men have an accident in their community. The aggressor admits fault. The victim refuses to contact police and the two of them discuss the issue rationally and without violence. A dialogue like that has to come from a place of mutual respect, some internal connection to one another that belies a mutual responsibility for one another. Albeit a terrible accident that could’ve been worse for both men, their sense of community was admirable.

Last Wednesday, a group of men invaded the home of Waldiman Thompson and his wife Ethlin at 160 Decatur Street in Bed-Stuy. The invasion happened in the middle of the afternoon as kids traveled home from school. The men tied the Thompsons up, threw sheets over their heads and ransacked their home. Ethlin eventually freed herself once the men left and she was able to contact the authorities. However, her husband tragically passed away as a result of this heinous crime. It was a horrible thing, an elderly couple known throughout our community robbed of so much more than whatever material things were stolen. They lost their precious time with one another, a thing that cannot be replaced. This was wrong.

The neighborhood though, they responded immediately. Every neighbor who had any information at all made it known to the authorities. Every small business in the neighborhood with security cameras made their footage available for review. People traded stories, tried to find common links and discussed ways to make their block more secure. I walked through that block on the day after the tragedy and I witnessed it with my own eyes, neighbors talking with each other, working together to find sense in the chaos, hoping that someone may say something that will lead to the capture of the treacherous men responsible for taking Mr. Thompson from his wife and community.

It reminded me of that car accident that I witnessed, neighbors exhibiting a mutual responsibility for one another, coming together to rally around a tragedy instead of simply doing nothing. When we all feel accountability, we all take ownership and we work together. The whole is greater than the sum of its parts. That is the definition of community.

We will find the ones responsible for the tragedy on Decatur Street because we are looking. All of us.

Everything is Bigger in Texas